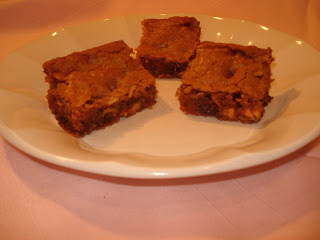 Don’t get me wrong.  I love blondies.  And I don’t have any reason to want them to die.
But you’d never guess it from the way I attacked this recipe. First, I knocked over the beaters and a good chunk of batter fell to the floor.  Second, instead of turning the oven to 325 degrees F, I turned the timer to 3 hours, 25 minutes.  (At least I caught that one before I tried to bake them.)  And third – because I always make mistakes in sets of three – I used too much parchment paper, which folded over and hung into the batter while baking, leaving a stalactite-shaped canyon through my blondies.
So this recipe must be foolproof because, once I cut around the canyon, they tasted great!  I had wished I had toffee bits to put in, but the butterscotch chips worked perfectly.  And the coconut added wonderful texture.  Next time I make them, I’ll probably cut the butter down a bit, but otherwise they were just great.
This blondie recipe appears in Baking: From My Home to Yours, by the incomparable Dorie Greenspan, and is also printed on the Cookies on Friday website. My variation appears below:
Chewy Chunky Blondies
2 cups flour
¾ teaspoon baking powder
½ tsp baking soda
½ tsp salt
2 sticks (1 cup) butter at room temperature (note: next time I make these, I’ll use ¾ cup)
1 ½ cups dark brown sugar
½ cup sugar
2 eggs
1 tsp pure vanilla extract
1 cup chocolate chips
1 cup butterscotch chips
1 cup sweetened shredded coconut
Centre a rack in the oven and preheat the over to 325 degrees F.  Line a 9” by 13” pan with parchment paper.
Whisk together the flour, baking powder, baking soda and salt.
Beat the butter on medium speed until smooth and creamy.  Add both sugars and beat for another 3 minutes.  Add the eggs one by one, then beat in the vanilla.  Reduce mixer speed to low and add the dry ingredients, beating until just mixed.  Stir in the chips and coconut and pour into the prepared pan.  Smooth the top as much as possible.
Back for about 40 minutes, or until a knife inserted into the centre of the blondies comes out clean.  Let them cool for about 15 minutes before removing from the pan.
Makes about 32 bars.