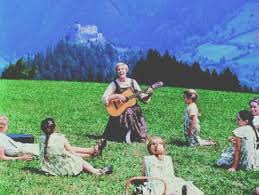 “Let’s start at the very beginning,
A very good place to start.”

Is there anyone who doesn’t love The Sound of Music?  When I was a kid, I remember sitting around the TV with my family watching it and singing along with the music.  We owned the official movie soundtrack, and my sister Gwen and I spent hours poring through the booklet that came with it, full of pictures from the movie and behind the scenes.  And on a family trip to Vermont when I was eleven, not only did we have dinner at the Trapp Family Lodge, we met the real-life Maria Von Trapp.  Gwen and I raced across the park to meet her, then stopped abruptly upon reaching her, speechless in the face of true celebrity.  She was gracious and kind enough to carry both parts of that conversation.

I’ve been lucky enough to take the Sound of Music tour in Austria twice in my life.  The first time was when I visited Salzburg in 1987 between stints at university.  (A special shout-out to Ruth and Jenn, both of whom I met on that trip.)

And we visited as a family in the summer of 2006.  By this time I had two daughters who loved the movie too (they’d been watching it since they were babies) and I had even converted Andrew into a super-fan.

The first thing we did when we arrived in Salzburg was sign up for the “Sound of Music tour”.  And we visited all the major scenes from the movie:  the facade of the Von Trapp residence, the Do-Re-Mi bridge, the chapel where Maria and the captain got married.  We even enjoyed a plate of crisp apple strudel when we stopped for lunch.

We had a lot of fun in Salzburg.  We visited the Mozart museum, took a funicular to the fortress overlooking the city, and caught a performance at the Salzburg festival.  But the high point was borrowing the movie from the front desk of our hotel, and watching it that evening, squealing with excitement when we recognized a place we’d been that day. And we sang just as loudly and earnestly as I did when I was ten years old, watching the movie with my parents and Gwen.

Next week: another moment on a trip that was inspired by a movie!