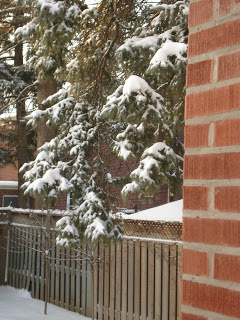 Finally, the snow we’ve been waiting for has arrived!  Although we technically had a white Christmas, there’s been little snow on the ground this winter.  Until this week.
I’m not saying I like winter.  In fact, I’d more or less say I don’t like winter.  You’ll never hear me complaining about the humidity in the summer or the shortening days in the fall, mostly because I’m so grateful for the humidity or the darkness instead of icy sidewalks and fourteen layers of clothes.
But even a non-winter fan like me appreciates the beauty of a fresh snowfall.  I loved being one of the first ones outside in the morning, when the sun was just beginning to rise.  The snow was still undisturbed and lay in soft mounds, undulating like ocean waves frozen in place. Later in the day, my teenagers went tobogganing, and I greeted them back here with hot chocolate topped with bobbing marshmallows. 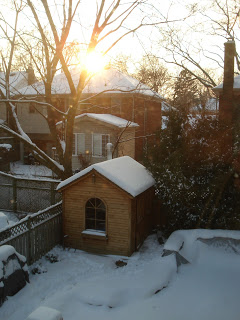 Still the beauty doesn’t compensate for those icy sidewalks, and for the slushy roads and needing extra time to scrape the ice off my windshield.  For wet boots leaving puddles in my front hall, and finger-numbing temperatures.  And (for long-suffering hockey fans) for the dreary ennui of the Toronto Maple Leafs losing yet another game.  January and February usually find me longing for warmer days.
And I think that’s why this dessert appealed to me.  These lime cheesecake squares taste like summer.  No, they are summer.  When I closed my eyes and bit into them, for a few minutes I wasn’t in Toronto in a snowstorm, I was in ancient Persia, reclining in a hammock in a palace courtyard.  Not bad, for an investment of a few minutes in the kitchen. 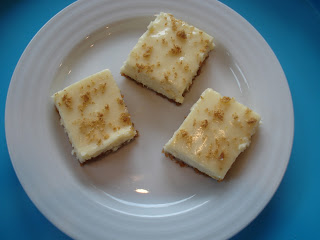 Lime cheesecake squares
(adapted from Modern Comfort Food)
1 1/4 cup graham cracker crumbs
1 tsp sugar
1/3 cup melted butter
1 14-ounce tin sweetened, condensed milk
8 ounces cream cheese
2 egg yolks
9 Tbsp lime juice, about five small limes (the original recipe calls for key lime juice, but I can’t find key limes in Toronto in January, and I like fresh limes much better than tinned key limes)
Preheat the oven to 350 degrees.  Line a 9 inch square baking pan with parchment paper.
Combine the graham cracker crumbs and sugar, then stir in the melted butter.  Press the crumb mixture firmly into the bottom of the prepared baking pan.  (Optional: save a tablespoon or two of the crumb mixture to decorate the tops of the finished squares.)
In a mixing bowl, whip the condensed milk, cream cheese, egg yolks and lime juice until smooth.  Pour filling over the crumb crust.
Bake for 25 – 30 minutes.  Chill for at least 4 hours before serving.  If desired, top with remainder of crumb mixture.