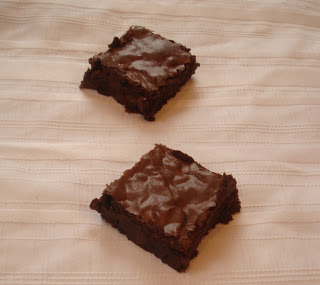 Have you ever noticed how recent converts are often the most enthusiastic?  For example, my friends and I like to talk about the kindle and other e-readers, and what it means for the future of the book.  The people who have just bought an e-reader are the ones whose eyes shine the brightest when they talk about it.
That’s how I am with browned butter.  Having just discovered this technique a couple of weeks ago, I feel like my life has been forevermore enhanced.  It’s hard to describe the nutty undertone that browning butter brings to a recipe.  Remember how magical it was the first time you watched a 3D movie?  How you felt that if you extended your arm, you could touch everything that you were seeing?  That’s what browned butter will do to your recipes.
I’ve been scouring my books for recipes that use melted butter, knowing that this method will bring them to an unimagined level of perfection.  So what an amazing coincidence it was when I saw the February Bon Appetit cover promising the “Best-Ever Brownies”.  And when I flipped open the magazine to read the recipe, it featured browned butter.
These brownies, developed by the amazing Alice Medrich, were truly wonderful.  And although I didn’t eat the entire tray, as the subtitle promised I would, I was very grateful that my hungry friends and family kept me from doing so.
The original recipe calls for walnuts.  My kids don’t love most nuts, so I substituted an equal amount of chocolate chips. Next time (and there will be a next time) I’ll try toffee bits instead.  I think they’d set off the browned butter perfectly.
Cocoa Brownies with Browned Butter
(adapted from the February 2011 issue of Bon Appetit)
10 tablespoons (1 1/4 sticks) unsalted butter
1 1/4 cups sugar
3/4 cup cocoa
2 tsp water
1 teaspoon vanilla extract
1/4 tsp salt
2 large eggs, chilled
1/3 cup plus 1 tablespoon unbleached all purpose flour
1 cup chocolate chips, toffee bits or walnut pieces
Preheat oven to 325°F. Line 8x8x2-inch metal baking pan with parchment paper, leaving a 2-inch overhang.
Melt butter in medium saucepan over medium heat. Continue cooking until butter stops foaming and browned bits form at bottom of pan, stirring often, about 5 minutes. Remove from heat; immediately add sugar, cocoa, water, vanilla, and salt. Stir to blend. Let cool five minutes (mixture will still be hot). Add eggs to hot mixture one at a time, beating vigorously to blend after each addition. When the mixture looks thick and shiny, add flour and stir until blended. Beat vigorously 60 strokes. Stir in your choice of chocolate chips, toffee bits or walnuts. Transfer batter to prepared pan.
Bake brownies until toothpick inserted into center comes out almost clean (with a few moist crumbs attached), about 25 minutes. Cool completely in pan, about four hours. When cool, use the parchment paper to lift brownies out of the pan. Cut into sixteen brownies.  Try to share them.