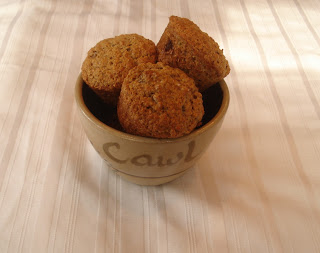 Which do you want to hear first – the good news or the bad news?
Actually, the good news won’t make much sense without the bad, so that’s where I’ll start.  I’ve decided to give up baking for Lent.
Every year, I try to forgo something that I love for the forty days leading up to Easter.  The purpose is to make a sacrifice that I’ll miss in my daily life.  Most years I go without dessert, or some subset of dessert.
This year I decided to do something slightly different.  I love baking, and not being able to do that for six weeks will be something I dearly miss.  (Note that we won’t be eating out every night, because cooking is still okay.)  I’m hoping the creativity that I normally pour into my baking can be funneled into writing instead.
Now here’s the good news.  I did a burst of baking just before Lent started, and I have more than enough recipes and photos to carry me through.
That didn’t prevent me, on the first day of Lent, from standing wistfully in the middle of the cookbook section of my local Chapters store, gazing at the forbidden recipes.  Mercifully, I was able to leave the store with my integrity intact.  But it makes me think the next month and a half will be difficult.
There was nothing difficult about these muffins.  They were the best bran muffins I’ve ever made.  They were moist and tasted delicious on their own, as well as with honey or jam.  Don’t miss the step of lowering the oven temperature as soon as you put the muffins in the oven.  That’s what gives them a nice crispy exterior without drying them out.
By the way, when one of our girls asked Andrew what he was giving up for Lent, he said “Your mother’s baking.”  What a hero.
Honey-Raisin Bran Muffins
(Adapted from Williams-Sonoma Muffins)
2 cups all-purpose flour
2 cups wheat bran
1 ½ cups raisins
1/3 cup wheat germ
2 tsp baking soda
1 tsp baking powder
1 tsp salt
½ cup unsalted butter, at room temperature
½ cup firmly packed brown sugar
½ cup honey
1 cup plain yogurt
½ cup buttermilk
2 tsp vanilla extract
3 large eggs, beaten
Preheat the oven to 400 degrees.  Line 18 standard muffin cups with paper liners, or use silicon muffin tins.
In a bowl, stir together the flour, bran, raisins, wheat germ, baking soda, baking powder and salt.
In another bowl, cream together the butter, brown sugar and honey until fluffy.  Beat in the yogurt, then the buttermilk and vanilla, until well blended and smooth.
Make a well in the centre of the dry ingredients and add the creamed mixture and the eggs.  Beat just until evenly moistened.  The batter will be thick and slightly lumpy.  Do not overmix.
Spoon the batter into each muffin cup, filing it level with the rim of the cup.
Transfer the filled pans to the oven and immediately reduce the oven temperature to 350 degrees.  Bake 18 – 22 minutes.  A toothpick inserted into the centre of a muffin should come out clean.  Let the muffins cool for at least 15 minutes before turning out of the tins.