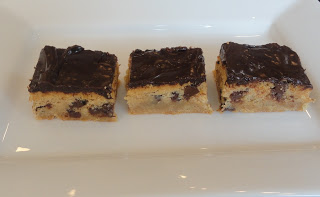 For those of you who have followed my blog over the last few weeks, you’ll know about my giving up baking for Lent.  I had no idea what an important part of my life it was until I had to quit.  From Ash Wednesday through this morning, I didn’t bake a single sweet good.
I’d be lying if I said it wasn’t difficult.  It truly felt like forty days fasting in the desert.  I queried the spiritual leaders in my congregation to find out precisely when I could start baking again.  (The consensus was sundown on Saturday, but as I was at church until 10:00 last night, it was a moot point.)
My commitment also meant I was mostly giving up dessert, too, as store-bought sweets just don’t cut it for me.  Twice I broke down and begged my oldest daughter to bake a batch of cookies. I also found myself wondering what would happen if I googled “wild honey and locust dessert”.  But only if I could find an unbaked version.
More than a few of you asked what my first dessert would be when I started baking again. Whatever I made would please my husband, who had heroically given up my baking for Lent.  But it had to involve a lot of chocolate to placate my 13-year old, who gave up chocolate. And it had to be something my whole family would love. 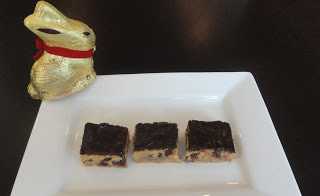 In the end, choosing the first dessert was the easiest part of my resolution.  I’ve been eyeing the Peanut Butter Brownie recipe on Smitten Kitchen for a while, and this was the perfect dessert to break my fast.
By the way, I now plan to bake up a storm to make up for those lonely, barren Lenten weeks.  I’ve already made promises to my youngest daughter’s classmates, to my church’s hospitality committee, and to my neighbour’s church fundraiser.  My work is cut out for me – and I couldn’t be happier.
Peanut Butter Brownies
(from Smitten Kitchen)
For brownies:
2 sticks (one cup) unsalted butter, softened
1 ¾ cups sugar
1 cup creamy peanut butter
2 large eggs plus one egg yolk
2 tsp pure vanilla extract
2 cups all-purpose flour
1 ½ cups semisweet chocolate chips
For ganache:
1 ½ cups semisweet chocolate chips
½ cup heavy cream
1 Tbsp unsalted butter, softened
Preheat oven to 350 degrees.  Butter a 13 x 9 inch pan and line with parchment paper.
Beat together butter and sugar until mixture is light and fluffy, then add peanut butter and beat until mixed.  Beat in whole eggs, egg yolk and vanilla.  Stir in flour until just combined.  Mix in 1 ½ cups chocolate chips, then spread batter in baking pan, smoothing top.  Batter will be quite thick.
Bake until brownies are golden brown, 40 to 45 minutes.  Cool completely in pan on a rack.
To make ganache, put 1 ½ cups chocolate chips in a heatproof bowl.  Bring cream to a boil in a small saucepan, then pour over chocolate chips.  Gently stir in butter until it is incorporated, chocolate is melted and a smooth mixture forms.  Spread ganache on cooled brownies and let stand until set, about 15 minutes.