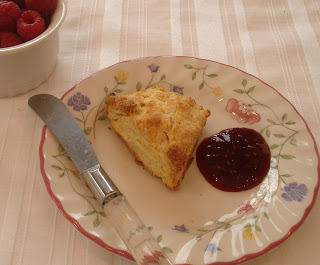 I love the English monarchy.
I’ve loved it since the first time I visited England.  I had just left my job at the bank, and was spending ten weeks traveling around Europe (mostly by backpack) before going back to school for my MBA.
On one of the last days of my trip, I went to watch the Changing of the Guard, when a bobbie told me it had been cancelled due to a parade.  “You can see the queen,” he said.
To my everlasting shame, I gaped, “You mean the Queen of England?!!”  To his everlasting credit, he answered in the affirmative without a grimace or a rolling of his eyes.
I was traveling on my own, and could change my schedule at a moment’s notice.  So I made a quick change of plans and grabbed a front row viewing space.  Two hours later, the Queen (of England) rode by in a carriage, accompanied by the King of Morocco.  I saw her for about three seconds and I was hooked.
After I graduated from business school and was working, my mother and I traveled to Charleston for a week. I noticed in the local newspaper that Prince Charles was in town for an international meeting of business leaders.  But he was taking a break that day for a public walkabout.  “Can we go?”  I breathed.  My mom agreed, and off we went.  This time, two hours at the fence meant that I got to shake his hand! 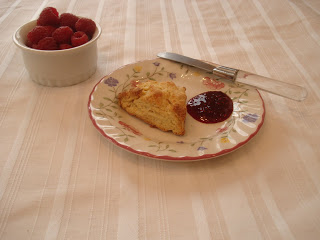 I haven’t seen Prince William and Kate Middleton in a parade, nor have I shaken their hands.  But that doesn’t prevent me from looking forward to their wedding.  I can’t claim that I baked these scones in their honour, as the photos were taken in late February.  But if I had known how easy it was to bake scones, and how delicious homemade scones were, I would have made them to celebrate every royal event, big or small.
I’m a little disappointed in the tradition of morning English weddings, which will require me to get up ludicrously early to watch it.  Perhaps I’ll bake some fresh scones on the morning of April 29th to accompany my cup of tea as I watch the young royals wed.
Cream Scones
(from Dorie Greenspan’s Baking From My Home To Yours)
1 large egg
2/3 cup cold heavy cream
2 cups all-purpose flour
2 Tbsp sugar
1 Tbsp baking powder
1/4 tsp salt
5 Tbsp unsalted butter, cut into small pieces and chilled
3/4 cup currants or raisins
Preheat the oven to 400 degrees.  Line a baking sheet with parchment paper.
Stir the egg and cream together in a medium bowl.
Whisk the flour, sugar, baking powder and salt together in a large bowl.  Drop in the butter and toss to coat the pieces of butter with flour.  Cut and rub the butter into the dry ingredients until the mixture is pebbly.
Pour the egg and cream over the dry ingredients and stir with a fork just until the dough (which will be wet and sticky) comes together.  Don’t overmix.  Stir in the raisins, then gently knead the dough by hand in the bowl or turn it with a rubber spatula 8 to 10 times.
Lightly dust a work surface with flour and turn out the dough.  Divide it in half.  Working with one piece at a time, pat the dough into a rough circle that’s about 5 inches in diameter.  Cut it into 6 wedges and place it n the baking sheet.  (At this point the scones can be frozen on the baking sheet, then wrapped air-tight.  Don’t defrost before baking; just add about 2 minutes to the baking time.)
Bake the scones for 20 to 22 minutes.  Cool for 10 minutes before serving, or wait for them to cool to room temperature.