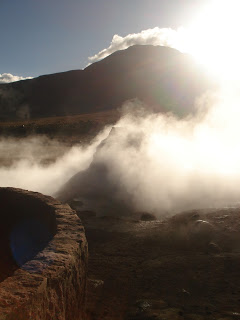 Being on holidays can sometimes be a great chance to catch up on the sleep you’ve missed the rest of the year.  To stay in bed luxuriously long, then gracefully rise to greet the day.
So if you’re setting the alarm for 4:30 in the morning, it must be for something really special.
In the case of the El Tatio geysers in the Atacama desert of Chile, the early hour was more than worth it.  The geysers were about a two-hour drive from our hotel, and they’re most spectacular in the cold air of dawn before the air warms up and the mist disperses.  Thus, the early morning wake up call.
This is the kind of adventure you hire a guide for.  The roads to the geysers are terrible, and the idea of navigating them at night is unimaginable.  As we slowly climbed the winding roads, some of us slept, but I gazed into the impossibly black sky that was punctuated by the brightest stars I’ve ever seen.  The geysers lay at an altitude of 4200 metres, and I could almost feel the air getting cooler and thinner as we traversed the hairpin turns uphill.
El Tatio is home to 8% of the geysers in the world. And it was amazing to walk from one geyser to the next – gingerly, because the ground is fragile in places.  If there’s one thing you don’t want at 7:00 in the morning, it’s a geyser bath.
When we arrived, our guide Veronica put some tetra packs of chocolate milk into one of the geysers, which we later enjoyed as hot chocolate with our breakfast. 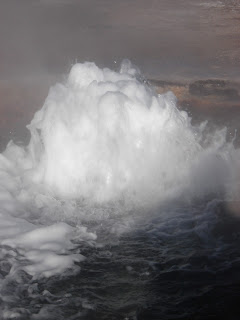 From some vantage points, it felt like we were watching the fountains at Versailles, except these were bursts of hot water and steam gushing into the air.  Some of them erupted, some bubbled, but being in the midst of this field of geysers felt ethereal, like we had stepped into a land of our imaginations.  A land where a variety of heavenly beings might emerge from behind the next column of steam.
Surrounded by the misty air, drifting from one geyser to the next, we could have been in the middle of a Monet landscape.  And as the sun rose, we witnessed an ever-changing view of these wispy miracles.