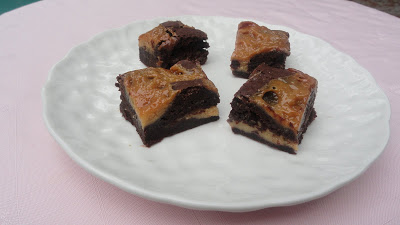 Sarah:  These are delicious.  What did you call them?
Sky:  Dulce de leche.
Sarah:  Dulce de leche.  What’s in it, besides milk?
Sky:  Oh, sugar, and a sort of natural flavoring.
Sarah:  What’s the name of the flavoring?
Sky: Bacardi.
Sarah:  It’s very good.  I think I’ll have another one.
Guys and Dolls is a musical that unites the worlds of small-time gambling and the Salvation Army.  Sarah Brown is the earnest leader of the Save-A-Soul Mission, which is about to be closed unless she can convert some sinners. In the meantime, Nathan Detroit made a bet with Sky Masterson, challenging Sky to get Sarah to accompany him to Cuba.  Sky succeeds by promising to deliver “one dozen genuine sinners” (the other gamblers) to her mission later that week to prevent it from being closed.
While in Havana, Sky introduces Sarah to the delightful flavour of dulce de leche.  My version of this recipe isn’t spiked with Bacardi, but it doesn’t need to be.  The caramel sweetness of the dulce de leche plays perfectly against the cocoa brownies.  I’d happily travel to Havana myself for a taste of one of these.  I’ve used Alice Medrich’s wonderful Cocoa Brownies with Browned Butter recipe and David Lebovitz’s dulce de leche.  You could buy the dulce de leche already made, but this is an easy and inexpensive way to make it yourself.
If you aren’t familiar with Guys and Dolls, listen to the soundtrack from the brilliant 1992 Broadway revival of this show.  “Sit Down, You’re Rocking the Boat”, sung by one of the gamblers pretending to be saved, is possibly the funniest and most inspiring musical number ever written.
And how were the brownies?  They’re very good.  I think I’ll have another one.

Dulce de Leche Brownies
(adapted from Countless Calories, with recipes from David Lebovitz and Alice Medrich)
Ingredients
10 Tablespoons (1 ¼ sticks) unsalted butter
1 ¼ cups sugar
¾ cup cocoa
2 tsp water
1 tsp vanilla extract
¼ tsp salt
2 large eggs, chilled
1/3 cup plus 1 Tablespoon unbleached all purpose flour
1 cup dulce de leche (recipe follows)
Preheat oven to 325 degrees.  Line 8 x 8 x 2 inch metal baking pan with parchment paper, leaving a 2-inch overhang.
Melt butter in medium saucepan over medium heat.  Continue cooking until butter stops foaming and browned bits form at bottom of pan, stirring often, about 5 minutes.  Remove from heat; immediately add sugar, cocoa, water, vanilla and salt.  Stir to blend.  Let cool five minutes (mixture will still be warm).  Add eggs to hot mixture one at a time, beating vigorously to blend after each addition.  When the mixture looks thick and shiny, add flour and stir until blended.  Beat vigorously (mixture will be quite thick).
Transfer half the batter into the prepared pan.  Drop half of the dulce de leche, evenly spaced, over the brownie batter, then drag a knife through to swirl it slightly.  Spread remaining brownie batter over, then drop spoonfuls of the remaining dulce de leche in dollops over the top of the brownie batter.  Use a knife to swirl dulce de leche slightly.
Bake until a toothpick plunged into the centre emerges slightly moist with batter, about 45 minutes.  Let cool completely before cutting.
Dulce de leche
1 can (400 g) sweetened condensed milk
pinch kosher salt or sea salt
Preheat the oven to 425 degrees.  Pour sweetened condensed milk into a glass pie plate or pyrex baking dish.  Stir in salt.
Set the pie plate inside a roasting pan and add hot water until it reaches halfway up the side of the pie plate.
Cover the pie plate snugly with foil, tucking it in around the sides at the top.  Bake between 1 ¼ tand 1 ½ hours.  (While baking, check occasionally and add more water to the roasting pan if necessary.)
Once the dulce de leche has browned, remove from the oven and let cool.  Whisk until smooth.  Store in the fridge until ready to use.