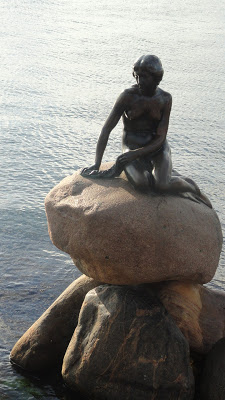 When we visited: August 2011
Why to go:
A beautiful city in its own right, we stayed here a night before and after a cruise of the Baltic region of Europe.
What to see:
The Little Mermaid is internationally known as the symbol of Copenhagen.  This statue represents the famous story written by Hans Christian Anderson, on which the Disney movie by the same name was based.
Tivoli Gardens is almost as well-known as the Little Mermaid.  Founded in the mid-19th century, this combination amusement park and garden is both photogenic and fun.  Helpful comments from the girls about the rides:  The Demon was the wildest, craziest ride.  The Star Flyer had a great city view.  And the Odin Express was “quaint” (their favourite adjective, used to describe slow roller coasters and their mother’s childhood). 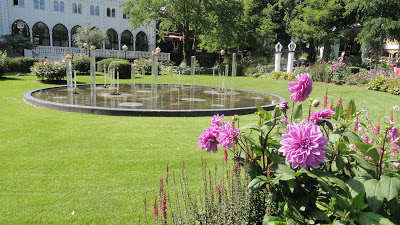 Nyhavn is a beautiful area with a canal running through it that’s lined with 18th century homes.  Originally the sailors’ section of town, now it’s full of trendy restaurants that overlook the canal and the boats. 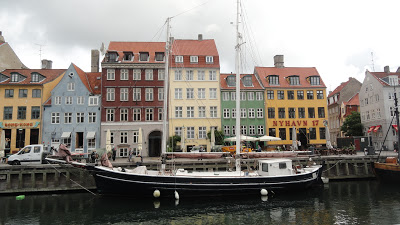 And our first night in Copenhagen, we went to the Ice Bar.  Everything in the bar (tables, shelves, glasses) is made of ice.  They gave us parkas and mitts in the entry area.  Then we entered the bar to order drinks.  I had the Delicious Pink, Andrew had the Rough Diamond, and the girls each had a non-alcoholic fruit cocktail.  Management had thoughtfully provided blankets on the ice benches, which made sitting a little more comfortable.  It was a lot of fun, but even with those blankets, not necessarily a place you’d want to linger. Oh, and in case you’re curious, I had to ask the bartender why we could drink from glasses made of ice without our tongues getting stuck.  Apparently, at a constant temperature of minus 5 degrees Celsius, it isn’t cold enough or dry enough for that to happen.
Where to stay:
Copenhagen, like many Scandinavian cities, is very expensive.  I spent a lot of time searching in vain for an inexpensive, centrally-located hotel.  What I did find was the Clarion Hotel Twenty seven.   Although the rooms were tiny (smaller than those on the cruise ship!), the hotel was less expensive than most and situated in a fantastic location, just a block from City Hall and five minutes’ walk from Tivoli.  And to seal the deal, breakfast and an early dinner buffet were both included in the price.
Where to eat:
On the recommendation of our hotel clerk, the day we went to Tivoli we had lunch at Grøften.  It was our only chance to try Danish food, and my potato soup with bacon was filling and terrific.  This restaurant was also where we saw Roger Moore, who was at a table about fifteen feet away from us.  The thrill of seeing him left me shaken, not stirred.
The Andersen Bakery can be reached from either inside or outside of Tivoli.  Their gorgeous baked goods make a wonderful breakfast or mid-day snack.
And our splurge meal was at Relae restaurant.  This is where we ate the pickled seaweed, which was served with baked celeriac and black olives.  And I don’t think I’ve ever seen a more beautifully presented starter than the leeks, served in mustard breadcrumbs. 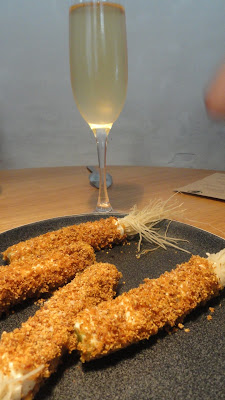