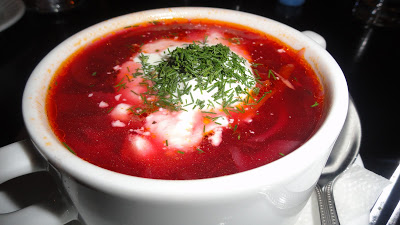 This summer, I had the joy of visiting one of the cities I’ve always dreamed of seeing – St. Petersburg, Russia.  Since I returned, everyone has asked what my favourite memory was.  The Hermitage museum, the Church on the Spilled Blood, and Peterhof were all amazing, and hopefully someday I’ll write about them all.  But without a doubt, the most special experience in St. Petersburg was our borscht lunch.
We visited St. Petersburg as part of a Baltic cruise.  In most of the ports, we toured independently.  But it’s not that easy in St. Petersburg.  Legal restrictions make it difficult to even get off the ship without having a prearranged guide who has organized a tourist visa for your stay.
We had hired a guide and driver through SPb Tours, but I must admit I was still nervous about disembarking.  I had given my family precise and lengthy instructions about how to behave while passing through Russian customs.  (For Seinfeld fans, think of the Soup Nazi with legal control of your passport.)  Then there was the fear of what we’d do if our guide didn’t show up, since we weren’t legally permitted in the country without her.
Our lovely guide Elena, did show up, though.  Since the cost of a private tour was only incrementally more expensive than taking a group tour, we had her to ourselves.  Elena also works as an English teacher, and her facility with the English language was only surpassed by her knowledge and love of the city.  Surprisingly, our driver Max also spoke perfect English.  (We found out later that they’re a couple.)

After a full morning of sightseeing, they took us to an out-of-the way café for lunch.  We knew the food had to be good, based on the amount of Russian we heard spoken there.  And it was good – sandwiches and the best borscht I’ve ever eaten. (Okay, the only borscht I’ve ever eaten.  I can’t believe I’ve spent my whole life thinking I don’t like borscht.  It was fantastic!)
But what made this the highlight of our time in St. Petersburg was the chance to sit down and talk to two locals.  The six of us crowded around a table meant for four, and we listened as they painted a picture of life in Russia today.  I didn’t know, for example, that if you smile a lot, the Russians will think you’re an idiot.  (I later realized that as I flitted around the city, beaming my perma travel-grin, I was probably close to being hospitalized.)
As a driver, Max had driven a number of Russian hockey players who previously or currently played in the NHL.  This was big currency with Andrew, who knows every player who’s ever played professional hockey and most of their statistics.
We talked about ladas, and the health care system, and the arts.  We listened quietly as Elena told us about her father’s failing health.  The borscht was great, but it was the company that made our lunch in St. Petersburg unforgettable.