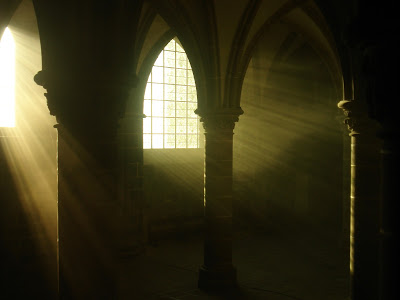 Before we visited France a couple of summers ago, I had no idea what a big tourist attraction Mont St Michel was.  I had seen photos and knew it looked glorious.  We specifically drove that far west, just so we could see this beautiful abbey on an island.
Basically built on a mountain of rocks that juts out of the water, MSM was built in the eleventh century and served as an abbey for hundreds of years.  And over that time, it was often used as a pilgrimage site by the wealthy until the abbey was closed during the French Revolution.  Converted to a prison, it wasn’t until the mid-nineteenth century that a group (which included writer Victor Hugo) petitioned the government to declare it a national monument. 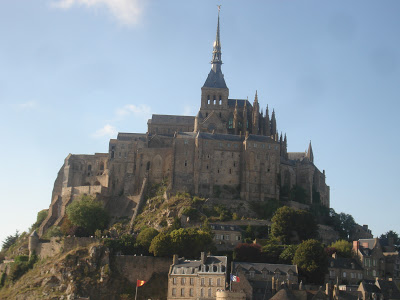 What I also learned is that it’s an incredibly popular tourist site.  In France, only the Eiffel Tower draws more visitors.  The difference is that the Eiffel Tower is in the middle of an enormous city, is served by a number of local Metro stops and can easily be walked to from any number of places in the city.  MSM is in the middle of the countryside, on an island that can only be reached by a single causeway.  So yes, it’s busy.  In fact, the advice that I kept reading was, don’t even try to visit during the daytime.  Plan your visit for earlier than 8 am or after 5 pm, and you’ll minimize the elbow-to-elbow nature of your visit.  You’ll also get a parking spot without a one hour wait.
True to form, we showed up a little past 5:00.  The car traffic reminded me of Disneyland.  The line-up to get one of those parking spots was only surpassed by the stream of cars passing us on the way out.  It was hard to believe that there were that many people in France, let alone at the abbey.
But we found a parking spot and started the half-hour walk across the causeway.  It rises so imposingly from the water that we were constantly stopping to take another gorgeous photo.  When we arrived at the island, it was still packed with tourists.  Rather than rushing to the abbey, we decided to meander through the crooked streets, check out the shops, and have dinner first. 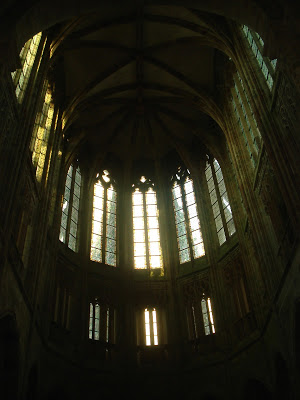 So by the time we arrived at the abbey at the top of the mount, we were doubly blessed.  Yes, the daytime crowds had thinned out.  We didn’t have it to ourselves, but rather than marching in lockstep from room to room with a legion of determined tourists, we could enjoy the serenity with just a few others.
The true gift, though, was that during summer evenings, Mont St Michel engages a few young classical musicians to play their instruments.  Not only were we seeing this gorgeous monument when it was less busy, but the music of Bach and Vivaldi made it truly magical.  As we walked through the ancient corridors, we would first hear faint strains that gained in strength as we neared the musician.  We approached each room to find a soloist on the flute, harpsichord, cello or violin. 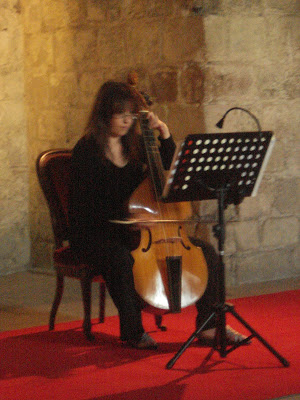 We paused in one room, watching the light magically stream through the side windows.  The thousand-year-old stone walls were cool to the touch, belying the heat of the day.  The music was simple and haunting, as if it had been written for the abbey itself.  And the pensive melody wafted through the air, filling our hearts with the miracle that is Mont St Michel. 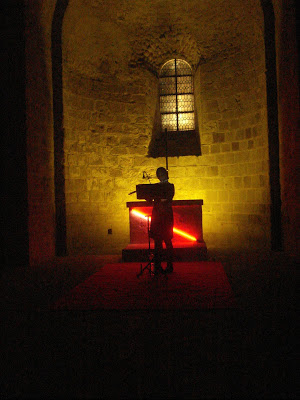