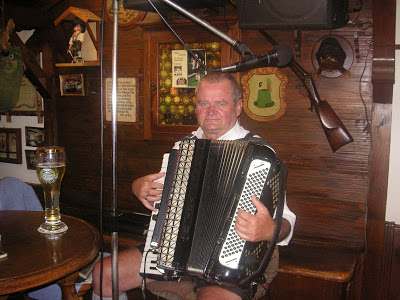 Five years ago, we spent a night in Garmisch-Partenkirchen in Bavaria, Germany. Partenkirchen originated as a Roman town almost 2000 years ago, and it amalgamated with Garmisch in anticipation of the 1936 Olympics.  Partenkirchen is a beautiful old town with frescoed buildings, one of which was the Gasthof Fraundorfer where we stayed the night. 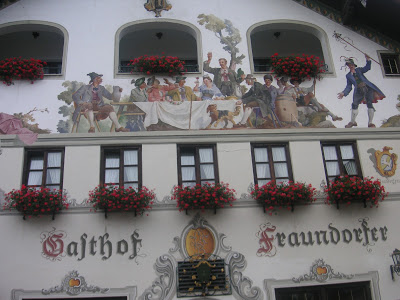 It wasn’t just the physical beauty of the building that encouraged us to stay there.  The hotel restaurant offered local specialties like sauerkraut, dumplings, and schnapps served on a plank.  And to complement the food, local Bavarian entertainers performed throughout the evening.
The entertainment started with an accordion player.  The accordion has a fabulous trajectory in North America, from Lawrence Welk through Weird Al Yankovic and Arcade Fire.  It’s more of a mainstream instrument in Bavaria, and was clearly fuelled by the large glass of beer on the table in front of the musician.
Next up were the Bavarian Slap Dancers, who did exactly what their vocation promised.  The action consisted of a fast-paced dance that involved slapping their thighs in rhythm to the music.  In the picture below, note the beautifully-embroidered lederhosen, and the complete lack of interest accorded the dancer from the patrons at the table behind.  I guess if you’ve seen one Bavarian Slap Dancer you’ve seen them all. 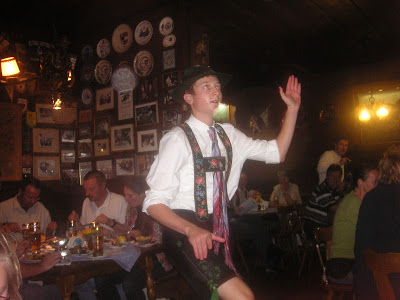 And finally, how could an evening of Alpine music be complete without a yodeler?  This is everything I know about yodeling: a) My sister and I used to laugh ourselves silly at Slim Whitman album compilation ads on TV; b) the first time I remember seeing yodeling was in “The Silly Song” from Snow White and the Seven Dwarfs; and c) the best yodeling song ever is “The Lonely Goatherd” from The Sound of Music.  (Did you really think I was going to write about Alpine music and not mention The Sound of Music?)
At the end of the evening, we were all invited to join in the yodeling.  Let’s just say that was a short, uncomfortable exercise in activities that bystanders should never try.  Yodeling, like Bavarian Slap dancing and accordion-playing, is best left to the experts.  And after watching the experts perform, we felt very fortunate to have witnessed this exceptional group of entertainers.