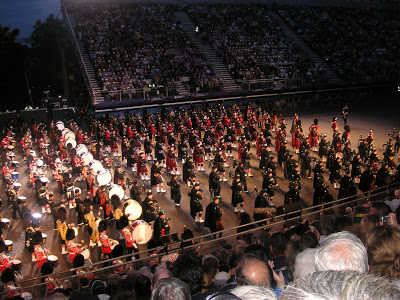 When we travel, we come home with a camera (and eventually an album) full of gorgeous photos that remind us of what we’ve seen.  But sometimes our most vivid memories are those that we don’t see, but that we hear.  This month I’ll be sharing some of our musical memories from our trips.
One of the first overseas trips we took with the girls was to Scotland.  They were ten and seven at the time, and we liked the idea of visiting an English-speaking country.  With activities that ranged from seal-watching to visiting a scotch distillery, there really was something for everyone.
But we’d all agree that one of the highlights of the trip was our last night in Scotland, when we were fortunate to hold tickets to the Edinburgh Royal Military Tattoo.  The Tattoo is a musical celebration held in the esplanade of Edinburgh Castle for three weeks every summer.
According to the Tattoo website, the word “tattoo” comes from the Dutch phrase “Doe den tap doe”, or “turn off the taps”.  When the British army was fighting in the Netherlands in the 17th century, drummers would signal that it was closing time for the pubs by marching through town drumming. This developed into a skill display, which then turned into a mass event featuring performers of all kinds, for entertainment purposes. 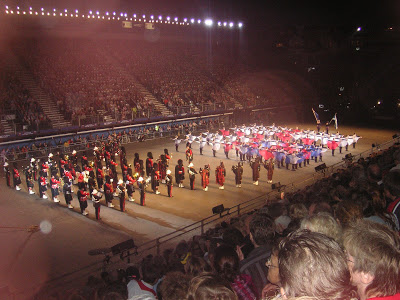 We joined other festival-goers in the late afternoon in a huge crowd outside the castle, waiting to get in.  We took our seats with great anticipation and, when the show began, we were treated to a wonderful display.  Military regiments from around the world and, of course, bagpipers filled the stadium with gorgeous music.  As the evening went on and the sky darkened, the sturdy castle in the back was illuminated by floodlights.
Toward the end of the show, all of the performers (numbering about a thousand) returned to the esplanade for a massed performance.  Then the crowd hushed, and everyone’s eyes were drawn to the Lone Piper, spotlighted atop the castle, playing a haunting number.
And just when we thought the evening couldn’t be topped, it concluded with a group singing of Auld Lang Syne.  Not from the performers on the field, but from the nearly 8000 attendees in the stadium.  We all held hands with our neighbours as we sang in unison.
And as we marched out of the stadium to the strains of Scotland the Brave, we knew we’d been part of a very special evening.