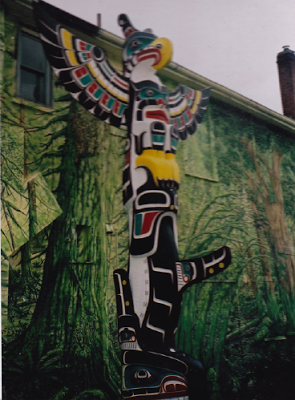 This month I’m writing about outdoor art that we’ve seen on our travels.  One of these wonderful displays appears in our own country.
We won’t forget the totem poles in Duncan, a town on southern Vancouver Island in British Columbia.  We visited in March 2002, on a trip to take the girls to visit their grandfather (my father-in-law) who was living in Nanaimo.  The trip was memorable for several reasons.  It was our younger daughter’s first airplane trip, and it was the first time either of the girls had seen the Pacific Ocean. 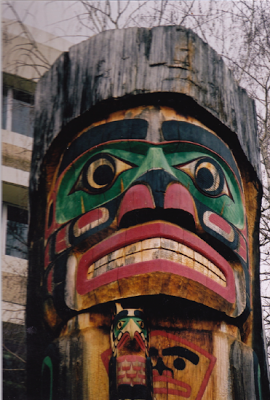 We stopped in Duncan on our way to Nanaimo and were rewarded by this amazing town dedicated to the art of the totem.  With over eighty on display, Duncan is known as the Town of Totems. Some of them were carved by local native artists, such as the widest totem in the world, Cedar Man Holding Talking Stick, by First Nations artist Richard Hunt.  Others have been purchased from elsewhere in Canada and across the world, coming from as far away as New Zealand.  One totem was carved specifically in honour of Rick Hansen, the Man in Motion.
The day was uncharacteristically cold, so our trip was brisk.  Andrew bought a duck hunter’s hat from a local outdoor shop in an attempt to keep warm, and perhaps to audition for a future totem.  My youngest daughter insisted on leading the way for our family along the city’s yellow-footed path. 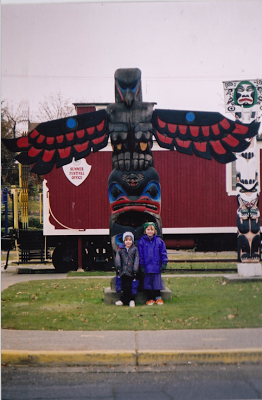 It’s hard to believe that this visit happened ten years ago next month.  Where does the time go? The little girls in this photo are now teenagers, and they’ve been on a number of plane trips.  But no matter where their future travels take them,  I’m sure they’ll always remember the wonderful totem poles of Duncan, British Columbia.