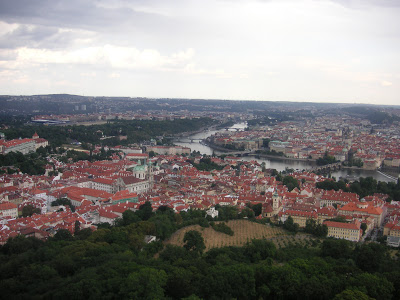 The last urban park I’m writing about this month is Petrin Hill in Prague.
We visited Prague in 2006, when the girls were eleven and eight years old.  Although I’m the main trip planner, I try to involve everyone in choosing what we’ll do while we’re on holidays.  Letting the girls choose and plan at least one activity helps them buy into our trips, and I think it’s one of the reasons they’ve become such engaged travellers.
Not surprisingly, on this trip my youngest daughter chose to visit Petrin Hill in Prague.  It has everything that a travelling child could ask for – a break from churches and museums, a chance to stretch her legs, a miniature Eiffel tower, and a maze of mirrors. 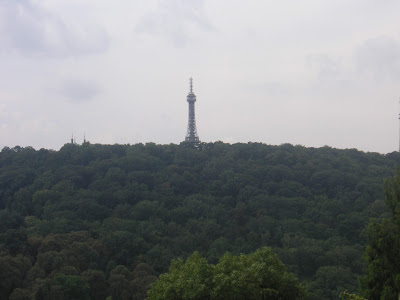 For my husband and me, it also offered some of the most beautiful views of one of the loveliest cities I’ve ever visited.  Looking down over the red roofs of the buildings and the many bridges spanning the Vltava River, we could have spent an afternoon taking one stunning photo after another. 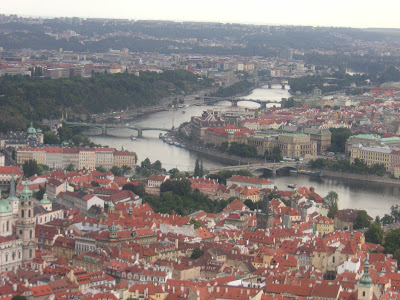 We considered taking the funicular up the hill, but with those aforementioned legs to stretch, we spent an afternoon walking there and back.  On the way up, we passed orchards, fields and forests, a surprisingly rural aspect of this large city.
And yes, at the top we climbed the Petrin Lookout Tower for the ultimate city view.  Built in 1891 for the Prague Expo, it’s much smaller than the Eiffel Tower, but actually reaches a higher elevation since it’s built on a hill. 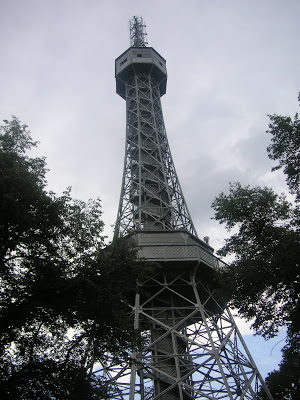 We walked through the mirror maze before heading back into the city proper, laughing at our oversized and distorted images in a series of mirrors.  Petrin Hill was a terrific way for a family to spend an afternoon!