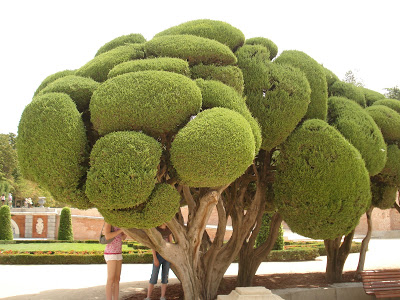 Last week I wrote about one of my favourite parks, Park Guell in Barcelona, Spain.  Today I’ll share a completely different park that we visited on the same trip, this one in Madrid. 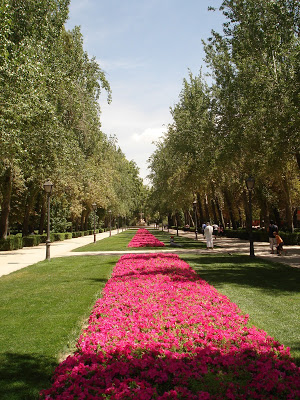 Retiro Park is a beautiful city landscape, just a short walk from our hotel and the Prado museum.  While Park Guell celebrates the natural beauty of its surroundings, Retiro features sculptured trees and meticulous flower gardens.  Long paved promenades lead through the park, meeting each other at right angles. 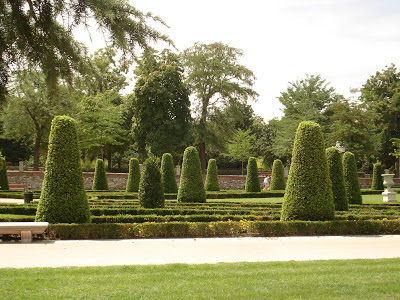 Built in the 17th century, the park was originally intended for the sole use of the Spanish royal family.  The gardens were made open to the public in the 18th century, but admission was restricted to those who were formally dressed.  (Admission rules have been relaxed somewhat since then.) 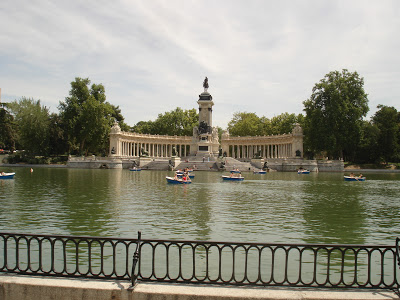 The heart of the park is a large manmade lake in the centre.  We spent an hour rowing around the lake, taking time to admire the enormous monument of King Alfonso XII by its side.  After disembarking, we meandered around its perimeter, enjoying the musicians and street artists.
One of the saddest days in the history of Madrid happened in March 2004, when a series of coordinated bombs struck its commuter train system.  A year after the bombings, 192 olive and cypress trees were planted in Retiro Park, one for each victim of the attack. 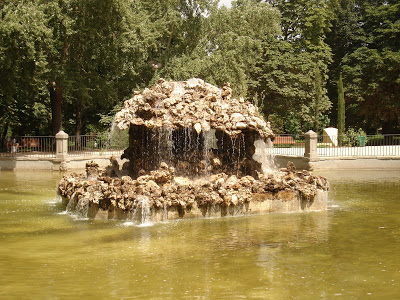 We weren’t aware of the significance of those trees on the day we visited, but there was something about Retiro Park that seemed emblematic of the city of Madrid.  It’s what we chose to do on our first afternoon in Madrid, our first afternoon in Spain, when we were still mastering the basics of the Spanish language. And as we enjoyed our lunch by the lake in Retiro Park, we felt like we had a little insight into this beautiful city and its magnificent country.