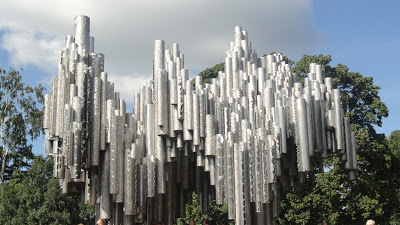 You may not associate the country of Finland with music, but this is my second post about Helsinki, and they’ve both been on the topic of music.  (If you missed my story on Finnish bridal music, it’s here.)
Helsinki’s best-known city park is Sibelius Park, named in honour of its renowned classical composer, Jean Sibelius.  His most popular piece of music, Finlandia, is a tribute to the pride and patriotism of the Finnish people.

At the time the park was inaugurated, a competition was launched to build a memorial statue to him.  Hundreds of applications were submitted, and the winning one was designed by Eila Hiltunen.  Comprised of more than 600 hollow steel pipes welded together, it represents the essence of music rather than a particular instrument. (Although it resembles organ pipes, Sibelius didn’t write organ music).  Built in a wooded area, it’s also evocative of a forest, and harmonizes surprisingly well with its surroundings. 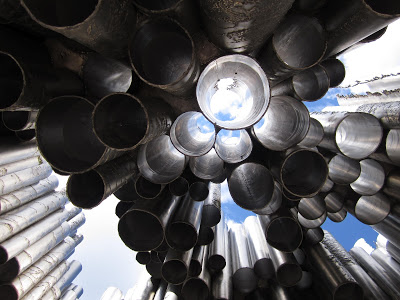 People either love the statue or hate it and, as it was being built, there were many more in the “hate it” camp.  After it was finished, there was so much outrage over the statue that a second one was added, responding to people’s concerns that a statue dedicated to someone actually depict what they looked like.  Because if any of us had a statue built in our honour, we’d want to be remembered like this: