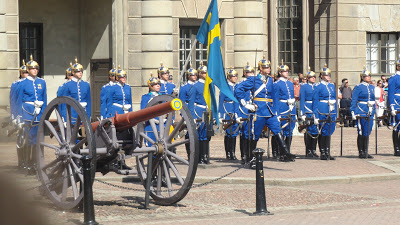 Who doesn’t love visiting a stately palace or a magnificent castle?  This month I’ll be writing about some of the royal residences that we’ve visited. 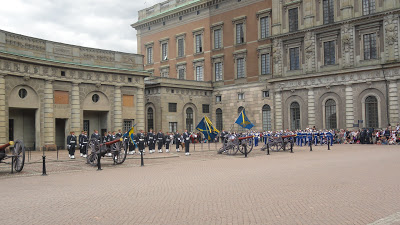 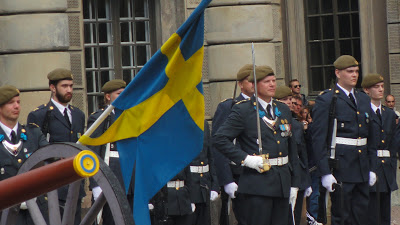 Watching the Changing of the Guards is always exciting, but this one was special for a couple of reasons.  First, we were incredibly close to them, separated only by a rope hung between a couple of posts.  And second, the guards were so enthusiastic about their roles. Being a palace guard in Stockholm isn’t a permanent job, but a temporary one that young members of various branches of the military are called to for a few weeks.  Every member of the guard seemed intent on making the most of his or her time at the palace, serving with the eagerness of the young and the precision of the well-trained. 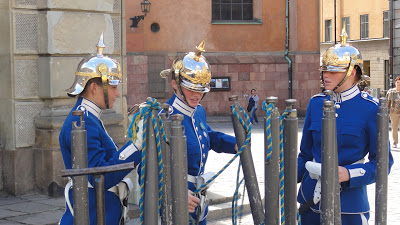 We got to the courtyard early that day, to ensure a front row position.  As the hour approached, we heard faint strains of the military band as it wound its way through Gamla Stan, and finally we saw them as they turned the corner into the palace courtyard.  The brilliant blue uniforms were dazzling, and the helmets gleamed with a dazzling polish.  The guards strode in time to a stirring Scandinavian march.  And on a sunny day in Stockholm, we felt honoured to watch the Changing of the Guard. 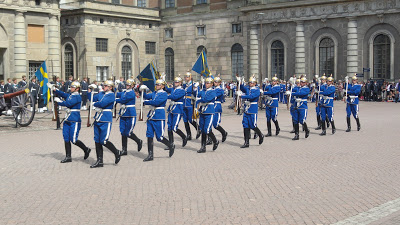