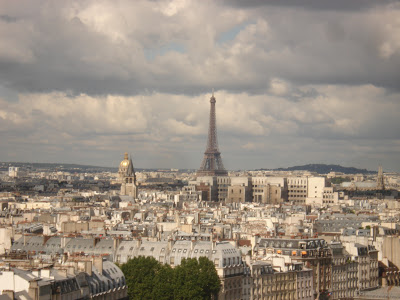 Last week, my blogging friend Nancy wrote about visiting Paris as a poor student, and again as an adult.  I realized that I haven’t written much about my long-ago adventures from the road, so this month I’ll be sharing some of them.
I’ve always longed to travel.  The summer I was sixteen, I began poring over the Saturday travel pages with an intensity usually reserved for discussing which of the Hardy Boys was the cutest.  (Parker Stevenson, by a hair.)  My cousin Heather and I talked about backpacking in Europe after high school, and I started cutting out the youth travel columns and saving them in a file folder.  Yes, even then I was compulsively organized about my trips.
In the final year of high school Heather got a serious boyfriend (who is now her husband).  I was happy for her, but it changed my travel plans.  My parents were reluctant to let a naïve 18-year old schlep through Europe by herself.  And then my research paid off, when I found a company that ran one-month homestays in France.  I stayed for three weeks with a family who lived about an hour outside of Paris in the tiny village of Saint Cyr Sur Morin.  The Marechals were the most welcoming hosts imaginable; not only did I improve my French, I learned a lot about grace and hospitality from this wonderful family.
I’ve seldom kept a diary but I did on that trip, and it’s a revelation to read it all these years later.  I guess it isn’t surprising that its two major themes were food and boys.
The entries about boys weren’t all that interesting.  But it’s easy to see how the summer awakened a new awareness of food in me. Coming from a small town, I was trying so many things for the first time – fish with their eyes still in, rabbit stew, croissants.  (I ate my first-ever croissant in Paris.  How amazing is that?)
One day we were at their friends’ house for lunch and I was served a dish that I didn’t recognize.  One of the others tried to help me by saying it was “la langue”.  La langue – isn’t that language?  In a flash it came to me – of course, it was tongue.  Maybe I should have been more adventurous, but I promise it was offal in every sense of the word.
Part of my being able to return my host family’s hospitality was baking for them, and some of my foods were as foreign to them as theirs were to me.  When I announced my plans to bake a carrot cake, my French “mother” raised her eyebrows.  “Une gateau? Avec carottes?’  She loved it so much that she requested I make it again the following week for company.
Raspberry pie, brownies, peach pie – I was thrilled to share my mother’s and grandmother’s recipes with my new French friends.  And they were too polite to share their horror that I was putting baking soda – available only at the pharmacy – in my food.