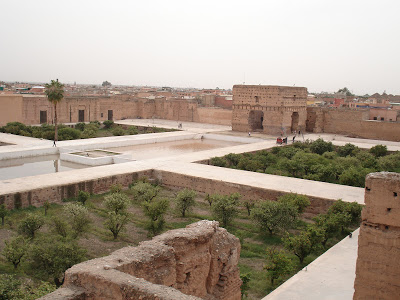 You might wonder why I’m featuring El Badi Palace as the final post in my tribute to amazing architecture that we’ve seen on our travels.  There isn’t much left of this palace in Marrakech, but when it was intact, it was an architectural marvel.
El Badi translates as “The Incomparable”, and when it was built it was breathtaking in its opulence.  Commissioned by Sa’did Sharif Ahmad al-Mansur in the sixteenth century, no expense was spared.  Only the finest materials were used, including Italian marble, ivory, exquisitely-carved woodwork, gold and onyx.  Paths were paved in terracotta tiles, as were roofs of the surrounding pavilions.  The main hall in one of the pavilions was flanked by fifty enormous columns.  In the courtyard, a cluster of swimming pools was framed by four sunken orange gardens. 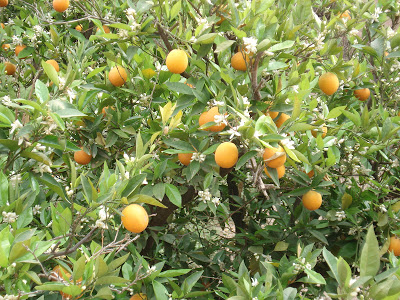 This was a building that should have stood forever.
But that’s not what happened.  A mere century later El Badi was torn apart, plundered for its precious materials so another ruler could build his own palace.
This is what remains: a courtyard with foundations of the pavilions, and four gardens which still blossom with the scent of orange.  A few denuded walls still stand, where storks have built their nests in the gaps. 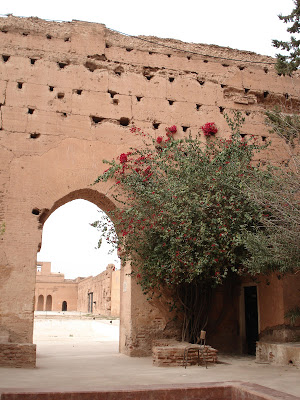 This poem wasn’t inspired by El Badi, but I couldn’t help but think of it as I witnessed the ruins of this once-majestic palace:
Ozymandius
I met a traveller from an antique land
Who said: “Two vast and trunkless legs of stone
Stand in the desert. Near them, on the sand,
Half sunk, a shattered visage lies, whose frown,
And wrinkled lip, and sneer of cold command,
Tell that its sculptor well those passions read
Which yet survive, stamped on these lifeless things,
The hand that mocked them, and the heart that fed;
And on the pedestal these words appear:
“My name is Ozymandias, King of Kings:
Look on my works, ye Mighty, and despair!”
Nothing beside remains. Round the decay
Of that colossal Wreck, boundless and bare
The lone and level sands stretch far away.”
– Percy Bysshe Shelley 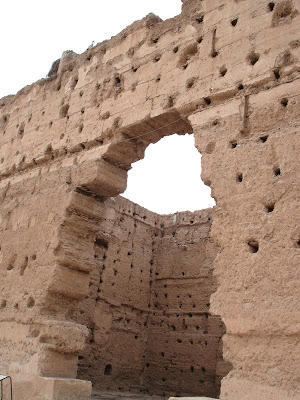