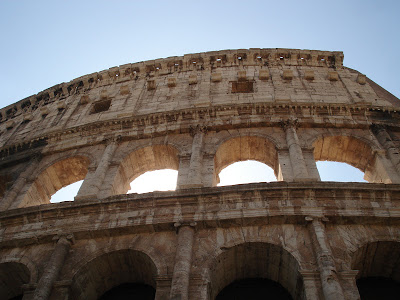 This month I’m writing about impressive architecture we’ve seen on our travels, and one of the most iconic buildings we’ve visited was Rome’s Colosseum.  This amphitheatre was built 2000 years ago, with a capacity of 55,000 spectators.  It was home to an incredible number of spectacles, including several occasions when it was flooded to stage reenactments of naval battles. 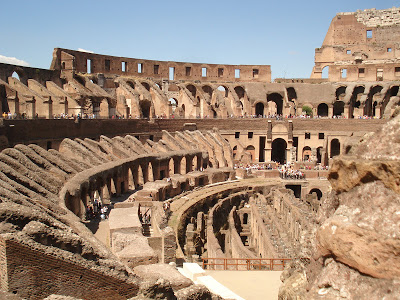 I first saw it when I travelled with Contiki Tours in my mid-20s.  Of course I was impressed with the Colosseum: It’s so big!  I’m standing where the emperors used to stand!  Is there a gelato shop around here?
(Readers who are around my age may be amused at my journal description of going dancing that night: “but I only stayed until midnight because I was pretty tired”.  Sightseeing all day and dancing til midnight.  Ah, the exuberance of youth.)
I visited again a couple of years ago, and I felt a little more conflicted.  I could still admire its architecture, but now thought about the cruelty that the Colosseum had been home to.  Gladiators fought to the death, wild animals were released and battled for the amusement of the audience.  Those emperors in whose spot I stood made life-or-death decisions about the entertainers in the arena before them. 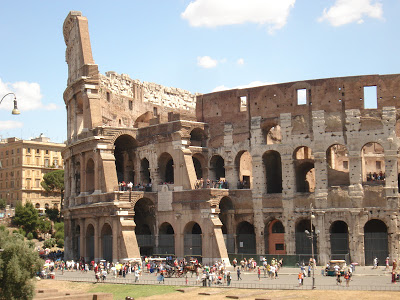 History is complicated.  And as so often happens, there’s no ‘good’ or ‘bad’, just that gray area in between.  I wanted to love this stunning building unreservedly, for its prominence in such a powerful empire and its sheer beauty and longevity.  But its sad history made me reevaluate how I felt about it.  In the end, I tried to accept it as it was, a beautiful monument to an empire that’s known for its brilliant engineering, cruel games, and political domination.