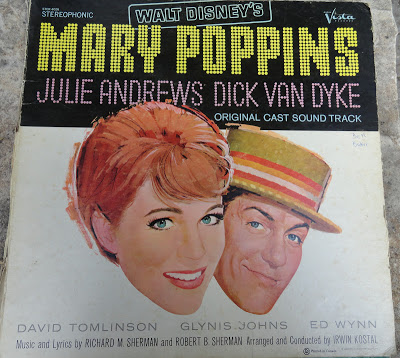 Most of you likely know the story of Mary Poppins, the magical nanny who appears out of nowhere to bring happiness to the Banks family.  Although I don’t remember much about the movie, I have vivid memories of the soundtrack.  My sister Gwen and I listened to the record many times when we were kids, and some of our favourite songs were on that album.  We giggled along with “I Love to Laugh”, when Uncle Albert, Bert and the children floated to the ceiling with laughter.  “A Spoonful of Sugar” was almost powerful enough to convince me that cleaning could be fun.  I must admit that the charms of “Sister Suffragette” were lost on us, but we spent many hours singing, dancing and acting with the rest of the songs.
In one scene, Mary (played by Julie Andrews in the movie) and Bert (Dick Van Dyke) are on an outing in the countryside when Bert describes a perfect day in “Jolly Holiday”:
“Ain’t it a glorious day?
Right as a mornin’ in May
I feel like I could fly
‘Ave you ever seen the grass so green
Or a bluer sky?
“Oh, it’s a jolly holiday with Mary
Mary makes your ‘eart so light
When the day is gray and ordinary
Mary makes the sun shine bright.”
Mary with her parasol, and Bert with his cane, stroll through an animated land, and are serenaded by barnyard animals.  Finally, they arrive at a restaurant where they’re served by penguin waiters, and Mary describes the ultimate meal for this perfect day:
“Now then, what’d be nice
We’ll start with raspberry ice
And then some cakes and tea.”
Mary Poppins was always right, and this time was no exception.  Whether you’re a banker or a chimney sweep, a nanny or a penguin, raspberry ice cream makes every day a little more jolly.

Raspberry Ice Cream
(from The Perfect Scoop, by David Lebovitz)
1 1/2 cups half-and-half
1 cup sugar
1 1/2 cups heavy cream
4 large egg yolks
1 1/2 cups strained raspberry puree (from 5 – 6 cups of fresh or frozen raspberries, pureed in a food processor then pressed through a mesh strainer to get rid of the seeds)
1 Tbsp freshly squeezed lemon juice
Warm the half-and-half and sugar in a medium saucepan.  Pour the cream into a large bowl and set a mesh strainer over the top.
In a separate medium bowl, whisk together the egg yolks.  Slowly pour the warm milk into the egg yolks, whisking constantly, then scrape the warmed egg yolks back into the saucepan.
Stir the mixture constantly over medium heat with a heatproof spatula, scraping the bottom as you stir, until the mixture thickens and coats the spatula.  Pour the custard through the strainer and stir it into the cream.  Mix in the raspberry puree and lemon juice, then stir until cool over an ice bath.
Chill thoroughly in the fridge, but to preserve the fresh raspberry taste, churn the ice cream within four hours after making the mixture.
If you don’t have an ice cream machine, you can still make this recipe, using Lebovitz’s directions as follows:  Pour the cooled mixture into a baking dish or bowl and put it in the freezer for about 45 minutes.  Then stir it very thoroughly, so that any bits that are beginning to harden are completely mixed through.  Repeat these steps every half hour until the ice cream is thick and creamy, about 2 to 3 hours. 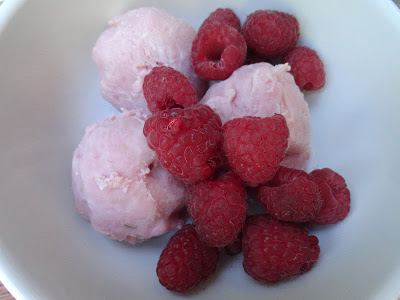