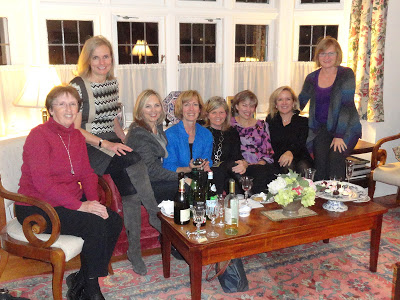 Does anyone else belong to a movie group?
A movie group is like a book club, except every month we watch a movie then meet to discuss it.  The movie part of the group is fun, but we’ve evolved into much more than that.  Among the eight of us, we have 18 kids between the ages of 14 and 19.  So whenever we get together, the subject of families comes up.  No matter what stage someone is going through, somebody else has either lived through it or is experiencing it at the same time.
Even more importantly, this is a genuinely nice group of women.  In the time we’ve known each other, there has never been any gossip or pettiness.  When I spend time with them I feel completely loved and accepted.

And that’s why, when I marked a certain milestone birthday this week, it was so special when they helped me celebrate.  When they planned the evening, they incorporated all the things I love to do.  We started by gathering at Carla’s parents’ house to watch an old movie (Woody Allen’s Manhattan), then we walked a short block to attend a cooking class (more about that another week), and returned to the house for cake and conversation.  I had an absolutely wonderful time, and the evening was made even more fun when they gave me a gift they knew I’d love – a KitchenAid stand mixer!  Thanks to Carla, Trish, Kim, Karen, Barb, Marlie and Jan for a great birthday celebration and for your amazing friendships. 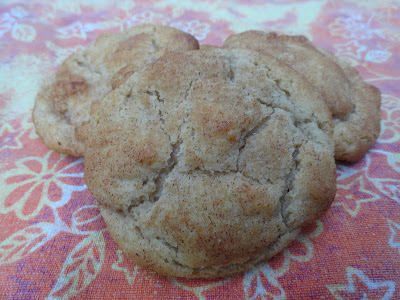 I’ve made these cookies without a stand mixer, but they’re much easier to make now that I have one.  Fifteen minutes of beating is a long time when you’re using a hand mixer.  I relish using that time to do other things while an appliance does the work for me.
Snickerdoodles can seem a bit plain when stacked up against cookies filled with chocolate, peanut butter or other worthwhile additions.  But these cookies are taken over the top with brown butter, and have become a hugely popular addition to my cookie repertoire.  And now that I can use my new stand mixer, they’ll become a more frequent addition to my cookie repertoire.
Brown Butter Snickerdoodles
(recipe from Baked Elements)
Ingredients
1 cup (2 sticks) unsalted butter
2 3/4 cup all-purpose flour
2 tsp cream of tartar
1 tsp baking soda
1/2 tsp salt
1 tsp ground cinnamon (first amount)
2 eggs
1 Tbsp milk (or half and half cream)
1 cup sugar (first amount)
1/2 cup tightly packed brown sugar
1 Tbsp ground cinnamon (second amount)
3 Tbsp sugar (second amount)
Place butter in a medium saucepan and brown it.  (For directions on browning butter, see here.)  Once browned, pour it into a large bowl and beat on medium-low speed until it cools to room temperature, about 15 minutes.
In a medium mixing bowl, combine the flour, cream of tartar, baking soda, salt and 1 tsp cinnamon.  Set aside.
In a separate small bowl, whisk together the eggs and milk.  Set aside.
Once the butter has cooled to room temperature, turn off the mixer and add 1 cup sugar and the brown sugar.  Beat on medium speed for about 3 minutes.  On low speed add the egg mixture in a slow steady stream.  Once all of the mixture has been added, beat on medium speed for about 1 minute.
Add the flour mixture in three separate parts, stirring to incorporate.
Refrigerate dough for at least one hour, or overnight.
Preheat the oven to 400 degrees and line baking sheets with parchment paper.  In a small bowl, mix together 3 Tbsp sugar and 1 Tbsp cinnamon.
Shape the dough into balls, then roll them in the cinnamon/sugar mixture until they’re evenly coated.  Place on cookie sheets, leaving at least one and a half inches between them.  Bake for 8-10 minutes.  Remove from oven and allow to rest on the sheets for 10 minutes before transferring to a cooling rack.