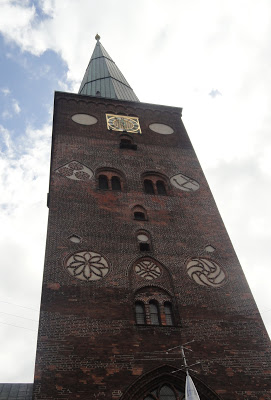 Aarhus Cathedral, in Aarhus, Denmark, is notable for a few reasons.  It is the largest church in Denmark and has both a stunning altar and a set of golden gates that separate the choir from the nave.  But its most striking features are the frescoes on its walls.  Only a few remain, but they indicate what this cathedral must have looked like in its prime.

We knew nothing about Aarhus before we disembarked at this port on our Baltic cruise last summer. The girls had begged to go to a beach somewhere on the cruise.  Most of the destinations gave us no time for a beach – even two days in St. Petersburg were barely adequate – but Aarhus was the one destination that had no must-sees, and thus it became our beach day.

But after a beautiful morning at the beach we still had a few hours left, and I remembered reading about the glorious cathedral that towered over the rest of the town. 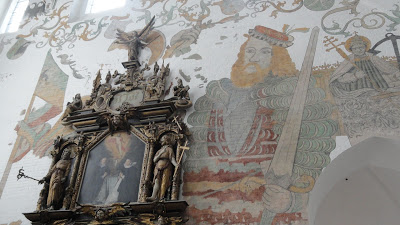 Construction on the cathedral began in the late twelfth century, and was completed around 1350.  Later, it was redesigned in the Gothic style, and between the years of 1470 and 1520, the walls were covered in frescoes.  Many of these lovely frescoes were lost during the Reformation movement but a few remain.  Those that survived cover over 2000 square feet on the interior walls of the cathedral. The largest, shown at the top of this paragraph, depicts St. Christopher and St. Clement, the latter of whom was a pope in the early church and patron saint of sailors, and to whom the cathedral is dedicated.

One of the beauties of travel is discovering the unexpected.  We’ve been fortunate enough to see some of the world’s great cathedrals, and they truly are spectacular.  But once in a while, it’s a joy to stumble upon a place that you never knew existed.  Built to glorify God, Aarhus Cathedral, with its vaulted ceilings and colourful frescoes, was a true pleasure to visit. 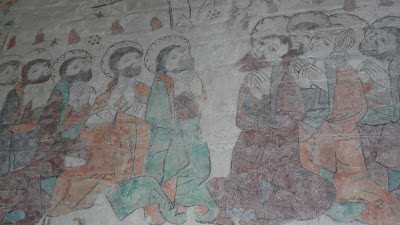