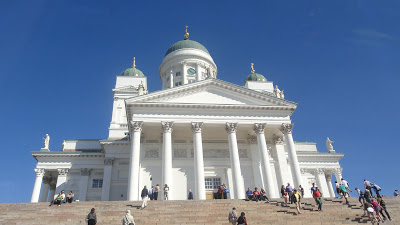 This month I’ll be writing about some of the beautiful places of worship we’ve seen, and I’ll start with Finland’s iconic Helsinki Cathedral.  Known in Finnish as Tuomiokirkko, the cathedral began its life in the mid-19th century as an Orthodox church.
When Finland was annexed by Russia in 1808, much of Helsinki was destroyed in a fire.  The Russians took on the job of rebuilding it, and a major part of that reconstruction was this church, built as a tribute to Tsar Nicholas I of Russia.  As a result it was known as St. Nicholas’ Church, until Finland gained independence in 1917.  It has since been renovated and renamed Helsinki Cathedral, and is now a Lutheran church. 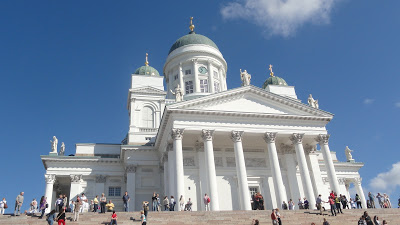 Although the church has some interesting historical significance, it really is its beauty that makes it a standout.  As we cruised into the Helsinki harbour, the elevated cathedral was the first thing we saw.  And it’s the first place most people visit in Helsinki.  These photos are completely unretouched – the sky really was that blue, and the church really is that white.
Helsinki was a city that I knew almost nothing about before I started planning the trip, and it was one of the loveliest surprises I’ve had in my travels.  I’ve written about Helsinki’s Rock Church and Sibelius Park, both of which were breathtaking and utterly unique.  But it was the beautiful Helsinki Cathedral that first welcomed us to the city. 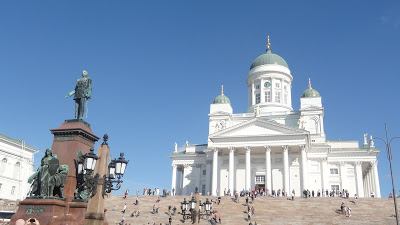