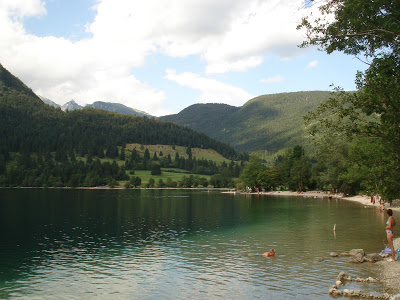 One of the tiniest beaches we’ve visited – even smaller than the beach at Aarhus that I wrote about last week – is the one by Lake Bohinj in northwestern  Slovenia.  Just a sliver of beach around a large glacial lake, it attracts very few visitors, but we spent an afternoon there four years ago playing in and around the water.

We stayed two nights at beautiful nearby Lake Bled, but longed for an afternoon in an even more serene location.  Hence the 26 kilometre drive to Lake Bohinj on roads so winding, we weren’t sure if we’d end up in Italy or back where we started.

Lake Bojinj is protected in more than one way.  The largest lake in the country, it’s surrounded by Slovenia’s Julian Alps.  But it’s also protected from overdevelopment by both the difficulty in reaching it and the fact that it’s located in a national park.  There are very few restaurants or hotels in the area, which means you have to be pretty determined to get there.

I understand it’s wonderful for fishing, and skiing in the winter is supposed to be great.  But we were there to relax.  Yes, the beach was pebbly rather than sandy, and neither the lake nor the air was warm enough to merit a real swim.  But the crystal clear water, the fresh pine air, and the fact that we had a section of beach all to ourselves meant we enjoyed one of the most tranquil afternoons we’ve ever spent on holidays. 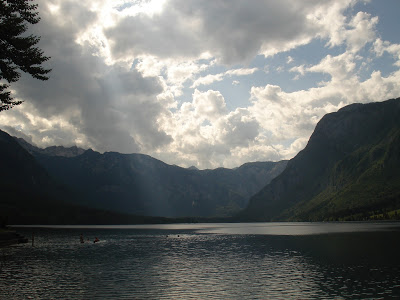