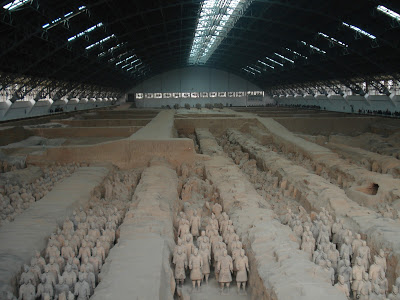 One of the most incredible feats of art or architecture I’ve seen are the Terracotta warriors of Xian, China. Built in about 200 B.C, they were buried and hidden from the world until 1974, when local farmers digging a well accidentally unearthed them.

This collection of life-sized warriors and horses made of terracotta were commissioned by the first emperor of China, Qin Shi Huang.  Designed to represent his imperial guard, they were built in pieces and then assembled before being fired.  Many of them are believed to have been built holding actual weapons, although those have since either rotted or been stolen.

Although excavation still continues, it’s estimated that there are 8,000 soldiers, 130 carriages and 600 horses. Historical records show that over 700,000 workers were involved in building this army. And the terracotta pieces probably owe their survival to the fact that the emperor insisted they be buried with him when he died.

The history behind these magnificent warriors is fascinating, but the most amazing moment was that breathtaking second when we walked into the chamber and were faced with lines of soldiers that seemingly went on forever.  They were an incredible testament to the creativity and vision of a long-gone empire. 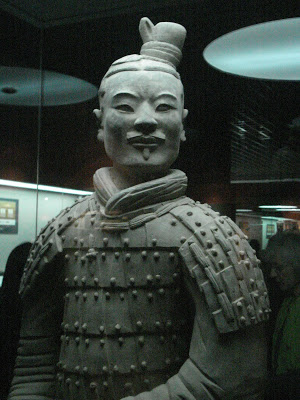