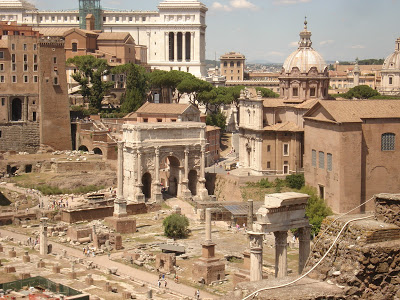 The Roman Forum has been called the most important meeting place in history.  It would be difficult to think of a town centre that was more important to its city; in truth, it was important to a whole empire.

For several centuries, the Roman Forum was the focal point of public life.  Temples, government buildings, a marketplace and courts of law were among the important structures erected here. Military parades usually wound around Palatine Hill and concluded in the Forum.  When Marc Antony spoke after Julius Caesar’s funeral to rouse the citizens, it was in the Forum. 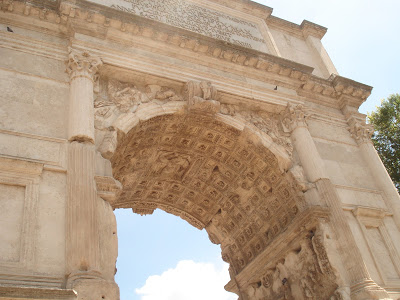 The arch of Septimius Severus, shown above, was built to commemorate that emperor’s victory against the Parthian Empire (part of ancient Persia) in the early third century.  The panels on the arch provide a pictorial description of those wars. 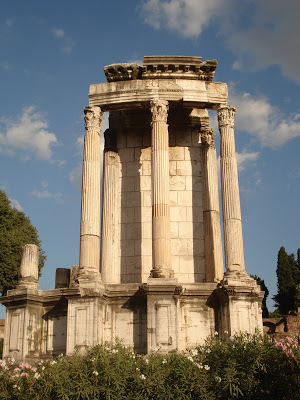 The Temple of Vesta, above, was one of the earliest structures built in the Forum, although it was subsequently rebuilt twice.  It was devoted to Vesta, the goddess of hearth and home.  A sacred flame burned in the temple, and was tended by the Vestal Virgins.
The Forum had very humble beginnings.  Originally a swamp between kingdoms on two hills, it was drained in the seventh century B.C. to provide a meeting place for citizens of both areas.  One of the world’s first sewers was put in to serve it.  The Forum remained influential until the sacking of Rome in 410 by the Visigoths, when many of the buildings were destroyed.  It was covered by sediment and debris for hundreds of years, even serving as a meadow for grazing cattle. But it was excavated in the nineteenth century, the ruins now giving us an incredible link to those brilliant Romans and their powerful empire. 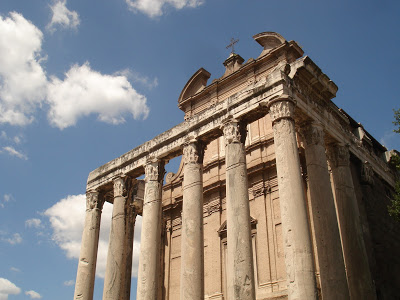