The calendar says spring, but the weather here still says winter.  What better time to reminisce about some of the gorgeous gardens we’ve seen?  And after I’ve written about these wonderful gardens for the next four weeks, I hope spring will have arrived for real.

The first garden I’m writing about this month is the elaborate complex at Peterhof Palace in St. Petersburg, Russia.  As impressive as the palace was, the gardens are what we remember.  Peter the Great had travelled to Versailles and, being amazed with what he saw, decided to build his own version.

The Grand Cascade is directly behind and below the palace, and fulfilled Peter’s dreams of designing gardens to rival those of Versailles.  The Cascade includes 60 fountains and 250 statues. The Samson Fountain is perhaps the greatest, and commemorates the Russian defeat of Sweden in the Great Northern War in the early eighteenth century.

The number of fountains both in the Grand Cascade and throughout the property is amazing.  To mention just a few, they depict not just Samson, but also Adam and Eve, the tritons, Bacchus and Satyr, and a nymph.  Others include the Orangerie Fountain, Dragon Cascade, Pyramid Fountain and the Marly Cascade.  Peter loved the water and the sea, and it’s no surprise that the property was full of canals, cascades and fountains, and that his favourite residence on the site, Monplaisir, sat next to the Gulf of Finland.

The trick fountains are one of the most entertaining features of Peterhof.  Unsuspecting guests might relax on the bench below, only to be sprayed with a sudden burst of water from a hidden fountain.  There were at least two other trick fountains that we saw (The Umbrella and the Oak fountain) that shoot water out when it’s least expected.

Like so much of St. Petersburg, Peterhof and the gardens were badly damaged after the Second World War.  It was only because of an enormous volunteer effort by the citizens of Russia that the estate was restored so beautifully.  And in a city that’s home to stunning palaces, world-renowned art and a breathtaking church, the gardens hold their own as a gorgeous place to visit — designed by a tsar and updated by his heirs, but now belonging to the people. 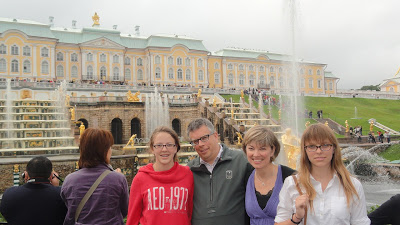