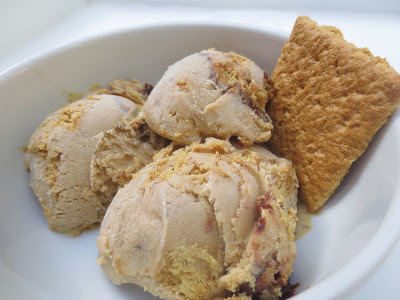 Labour Day weekend always seems like the end of summer to me.  Regardless of how warm it is today or it will be in September, Labour Day is like New Year’s Day – saying goodbye to the old and hello to the new.  My youngest daughter begins grade 11 on Tuesday, and my oldest daughter is moving into an apartment this week for her second year of university.  (Andrew and I spent most of today building IKEA furniture for her.  This falls so far outside of my skill set that every contribution I made was reason for celebration.)

With both of the girls having enjoyed wonderful summers at camp, I couldn’t resist making my own version of s’mores.  I have a few recipes on this blog that are variations on s’mores, including a pie, cookies and bars, and I think it’s because of my own happy memories at camp.  I spent four great years as a camper and another four as CIT and counsellor.  The best camp food I ever ate was s’mores by the campfire.  Toasting the marshmallow perfectly was tricky but, as I grew older, I finally developed the patience to toast it slowly instead of sticking it directly in the flames.

Most of all, s’mores are wedded in my mind with ghost stories, singing songs, and sharing jokes with camp buddies.  This wonderful ice cream represents the very best of childhood – s’mores, ice cream and summers that feel like they’ll last forever. 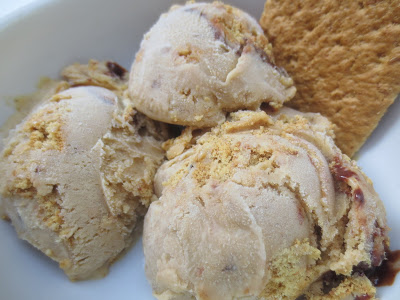 Place the milk in a medium saucepan and add the vanilla paste.  Set the pan over medium heat and bring mixture to a simmer.

Meanwhile, whisk together the egg yolks, sugar and salt in a large, heatproof bowl.  Slowly add the warm milk mixture to the egg mixture, whisking constantly.  Pour the mixture back into the saucepan, using a rubber spatula to scrape the mixture from the bowl back into the pan.  Turn the heat down to medium-low and cook, stirring constantly with the spatula, until the mixture thickens enough to coat the back of a wooden spoon.  (It should be between 170 and 175 degrees on a candy thermometer.)  Strain the custard through a fine-mesh sieve into a heatproof bowl.

Let the mixture cool for about 15 minutes, stirring it every few minutes to help it cool faster.  Put the toasted marshmallows in the blender, then pour the custard in the blender too.  Puree until the marshmallows are broken down and the mixture is smooth.  Add the heavy cream and vanilla extract and blend again for 5 to 10 seconds to combine.  Pour the mixture into a bowl, cover with a lid or plastic wrap and refrigerate for four hours or overnight.

For the fudge swirl:
Melt butter in a small pot.  Add cocoa and stir to blend.  Add sugar and half-and-half, and stir over medium heat until mixture thickens.  Chill before using.

To assemble:
When the custard is ready, make according to the ice cream maker’s manufacturer directions.  If you’re making it without an ice cream maker, use David Lebovitz’s guidelines: pour the cooled mixture into a baking dish and put it in the freezer for about 45 minutes.  Then stir it very thoroughly, so any bits that are beginning to harden are completely mixed through.  Repeat these steps every half hour until the ice cream is thick and creamy, about 2 to 3 hours.