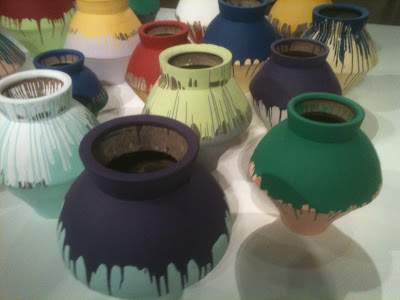 As an early birthday excursion, my girlfriends took me to the Art Gallery of Ontario to see the Ai Weiwei exhibition. I’ve mentioned this wonderful artist before and, seeing the show, I was moved by his powerful art. His most meaningful pieces were those created in response to the Sichuan earthquake of 2008.  He was outraged at how the Chinese government tried to cover up the number of deaths and failed to investigate the corruption that accounted for so many buildings being destroyed. His most powerful pieces commemorate the 5200 students whose lives were lost in the disaster.

But his sense of mischief is evident in many of the other pieces, including photos depicting him deliberately breaking a 2000-year old vase, or giving the finger to famous world landmarks. All of these works have a purpose behind them, and that purpose is usually to challenge authority and to give a voice to the underrepresented.

Having seen and enjoyed the wonderful exhibition, we then went to a nearby restaurant for lunch. For dessert, we split a sticky toffee pudding, after which one of my friends challenged me to make my own variation at home. Challenge accepted, Karen! 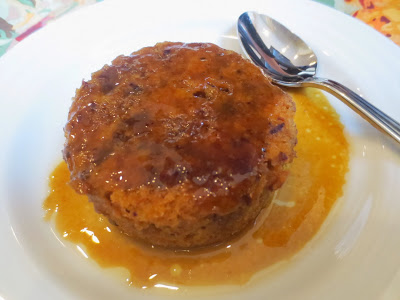 Sticky Toffee Pudding
Makes four puddings, although they’re quite rich and could be shared
(adapted from Annie’s Eats)
For the pudding:
1/2 cup plus 2 Tbsp all-purpose flour
6 Tbsp warm water
1/4 tsp baking soda
1/2 cup plus 2 Tbsp pitted dates, minced
1/4 tsp baking powder
1/4 tsp salt
6 Tbsp packed brown sugar
1 large egg
1 tsp vanilla extract
2 Tbsp unsalted butter, melted
For the sauce:
4 Tbsp unsalted butter
1/2 cup packed brown sugar
1/3 cup heavy cream
1 – 2 tsp rum
Directions
Preheat the oven to 350 degrees. Grease and flour 4 4-ounce ramekins. Line the bottom of each with a round of parchment paper. Place the ramekins in a baking dish large enough to hold them all comfortably.
In a liquid measuring cup, combine the water, baking soda and half of the dates, pressing the dates down so they’re submerged. Set aside and let soak five minutes. Drain, reserving the excess liquid.
In a separate medium bowl, combine the flour, baking powder and salt.
In the bowl of a stand mixer, combine the remaining dates and the brown sugar. Mix to combine.  Add the reserved soaking liquid, the egg and vanilla. Mix until smooth. With the beaters on low, pour the melted butter into the mixture in a steady stream.
Add the dry ingredients and the drained dates to the wet ingredient mixture. Fold together until all ingredients are well mixed, being careful not to overmix. Divide the batter evenly between the prepared ramekins. Use hot water to fill the baking dish halfway up the sides of the ramekins. Cover the entire pan tightly with foil and bake until the cakes are slightly puffed, about 40 minutes. Immediately remove from the water bath (being careful to avoid steam when removing the foil) and transfer to a wire rack to cool.
While the cakes cool slightly, make the toffee sauce by combining the butter and sugar in a small saucepan over medium heat. Whisk the sugar into the butter. Continue to cook, stirring occasionally, until the sugar is dissolved and the mixture puffs up a bit. Slowly pour in the cream and rum, whisking just until combined. Reduce heat to medium-low and maintain heat until warmed through, about 2 – 3 minutes.
To serve, invert the cakes onto serving plates. Remove the parchment paper. Drizzle the toffee sauce over the tops of the still-warm cakes.