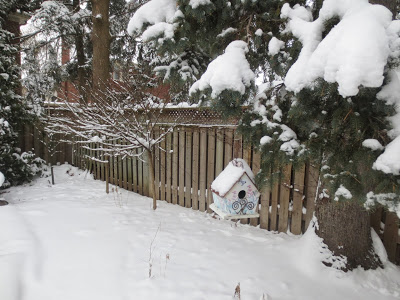 “Bolt and bar the shutter
For the foul winds blow:
Our minds are at their best this night,
And I seem to know
That everything outside us is
Mad as the mist and snow.

“Horace there by Homer stands,
Plato stands below,
And here is Tully’s open page.
How many years ago
Were you and I unlettered lads
Mad as the mist and snow?

“You ask what makes me sigh, old friend,
What makes me shudder so?
I shudder and I sigh to think
That even Cicero
And many-minded Homer were
Mad as the mist and snow.” 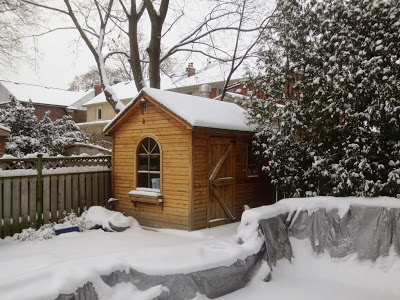 Yesterday we had our first big snowfall of the year in Toronto. It snowed all day without stopping, and that had its usual impact on traffic and life in the city. We went to Andrew’s boss’s Christmas party last night and it took us nearly two hours to get home. The blue light of a snow plough led the line of cars ahead of us, and we snaked behind in a snowy procession until we reached the highway.

From the looks of it, we got about six inches of snow. I spent close to an hour clearing the driveway and cars this morning, and greeted my neighbours who were doing the same thing. I had been inside about twenty minutes before I looked out and noticed it was snowing again. Such is life in Toronto in the winter.

On a day like today, there’s only one kind of recipe to post, and that’s soup. This mushroom barley soup is perfect if you’re looking for something to warm you after hanging up your snow shovel. 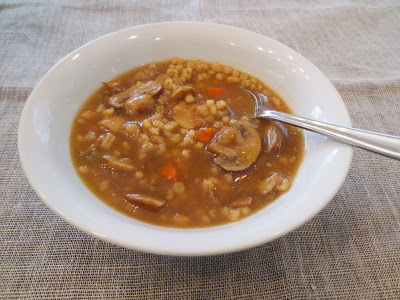 Put the dried mushrooms in a bowl and cover them with 2 cups of boiling water. Allow them to soak for an hour. Strain the mushrooms into a bowl, reserving the liquid. Coarsely chop the mushrooms and set aside.

Bring the mixture to a boil, stirring frequently. Reduce the heat to low and simmer until the barley is tender, about 30 to 40 minutes. If the soup is too thick, add a little more water. Adjust the seasoning with more salt and pepper if necessary.