My family has a long association with Joseph and the Amazing Technicolor Dreamcoat. Andrew and I first saw the show when we visited London in 1992, a year after we were married. That trip was my first chance to meet most of his British relatives; both the trip and the musical were a big success.
A few years later, my mother took my sister and me to see the show at the Elgin Theatre in Toronto, starring Donny Osmond. And when my daughters were young, their elementary school put on a production in which their babysitter played Joseph.
But by far my favourite memory of Joseph happened when my youngest daughter was a newborn and my oldest daughter was a three-year-old – a very lively, animated three-year-old. It had been hard to keep up with her while I was pregnant, but now that she had a baby sister, I didn’t know how to keep her busy, especially when I needed to nurse the baby.
But one day, inspiration hit. I turned on the soundtrack to Joseph and asked her to perform the show for us. And she proceeded to take every role, acting and singing with an energy that was incomprehensible to her sleep-deprived mother. This routine became a staple of my child-rearing techniques, and kept her happy for many hours with very little participation required from me.
If you know the musical – or the Bible story on which it’s based – you won’t be surprised that the recipe it inspired was a loaf of bread. Joseph made a name for himself by interpreting dreams. Meeting two men in prison, they each told him their dreams, and Joseph explained what they meant. First, the butler told his dream and Joseph said he’d soon be freed. Then it was the baker’s turn:
“There I was standing with baskets of bread.
High in the sky I saw birds overhead,
Who flew to my baskets and ate every slice.
Give me the message – like his would be nice.”
(Unfortunately for the baker, he didn’t get a good-news message like the butler.)
When I make homemade bread, I almost always bake whole-wheat, whole-grain varieties. But focaccia, with its roots in ancient Rome (panis focacius), seemed in some vague way to complement a musical set in an ancient civilization. Now I realize the only connection is that my family – like the birds in the lyrics – ate every slice, with astonishing speed.
For other recipes inspired by musicals on my blog, see my recipe index. 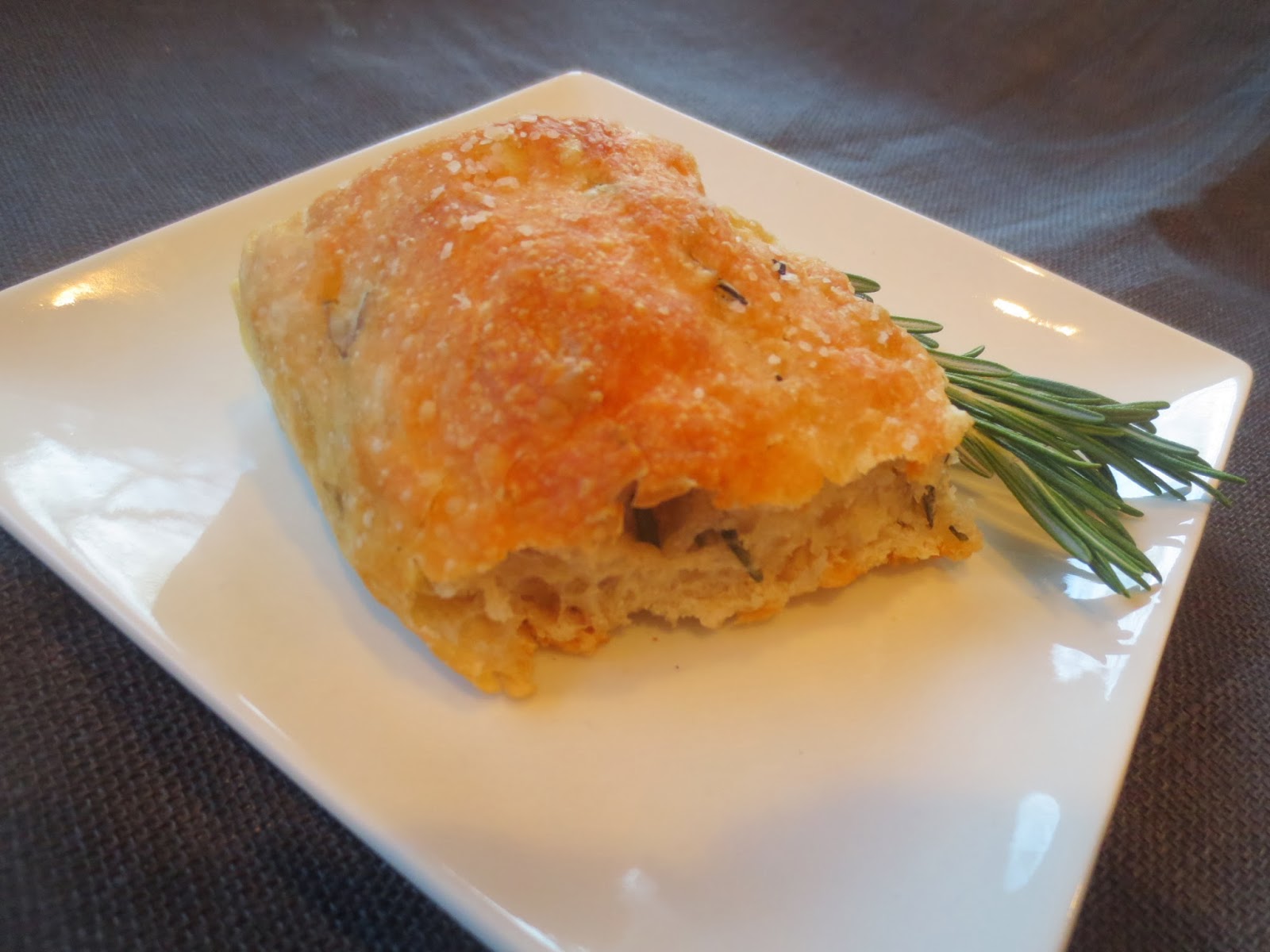 Rosemary Focaccia with Coarse Salt
(adapted slightly from Kneadlessly Simple, by Nancy Baggett)
2 3/4 cups unbleached all-purpose white flour, plus more if needed
2 Tbsp fresh rosemary needles (remove the stems), chopped fairly fine
3/4 tsp kosher salt
1 tsp instant, fast-rising, or bread-machine yeast
1 1/3 cups ice water, plus more if needed
1 Tbsp olive oil (first amount)
1 Tbsp olive oil (second amount), plus more as needed
3/4 tsp sea salt or other coarse salt
First rise: In a large bowl, thoroughly mix together the flour, rosemary, salt and yeast until blended.   Vigorously stir in the water, scraping down the bowl and mixing until very well blended. Vigorously stir in 1 Tbsp of the olive oil. If the dough is dry and hard to blend, stir in enough more ice water to yield a moist, yet slightly stiff dough.  Split dough in half, and place each in a medium to large mixing bowl. Cover bowls tightly with plastic wrap.  If desired, you can refrigerate the dough for 3 to 10 hours.  Then let rise at cool room temperature for 12 to 18 hours (preferably closer to 18 hours).
Second rise: Line two 8” x 8” baking pans with parchment paper. Using a well-oiled rubber spatula, turn the dough out into the pans, trying not to deflate any more than necessary. Drizzle each loaf with 1/2 Tbsp of olive oil. With well-oiled hands, lightly pat and press out the dough until it is evenly thick and extends to within 1 inch of the edges all around. Tent the pan with olive oil-brushed plastic wrap.
Let rise: For a regular rise, let stand at warm room temperature for 2 1/2 to 3 1/2 hours.  For an extended rise, refrigerate for 4 to 24 hours then set out at room temperature.  Continue the rise until the dough doubles from its deflated size.
Baking: 20 minutes before baking time, place a rack in the lower third of the oven; preheat to 500 degrees.  Place a broiler pan on the oven floor.  To bake, place the loaves in the oven and reduce the temperature to 475 degrees.  Immediately add a cup of water to the broiler pan – be careful of splattering and steam.  Then bake for an additional 8 – 10 minutes (or until the centre registers 209 to 212 on an instant-read thermometer) to be sure the centre is done. Cool in the pans on wire racks for 10 minutes, and transfer to wire racks to cool completely.
Note: Focaccia is best when fresh. Cut into rectangles and serve warm or at room temperature. To maintain crispness, drape with a tea towel at cool room temperature for 2 to 3 days.