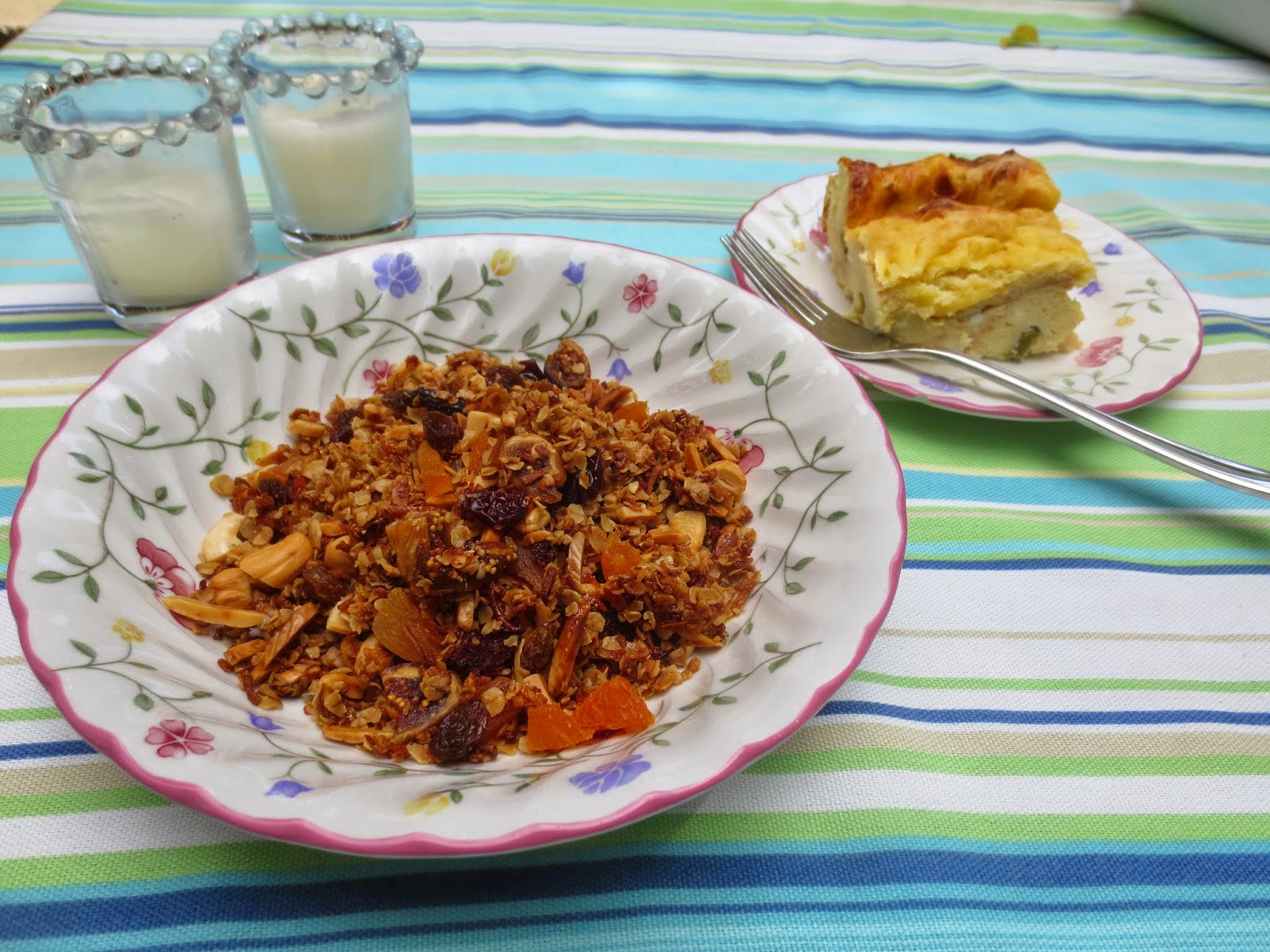 I’ve written before about our 25 year friendship with the Jay family. Garth and Andrew started working together at Heinz Canada in 1989. His wife Colleen and I soon met, and hit it off immediately.

We have a long shared history. Garth was master of ceremonies at our wedding. We travelled to New York with them in March, 1994, when I was pregnant with our oldest daughter. Our family travelled to China to visit them in 2008, when Colleen was posted there for three years. Within Canada, we’ve travelled back and forth to each others’ houses and cottages.

But we’ve never had a visit like we did on Monday. 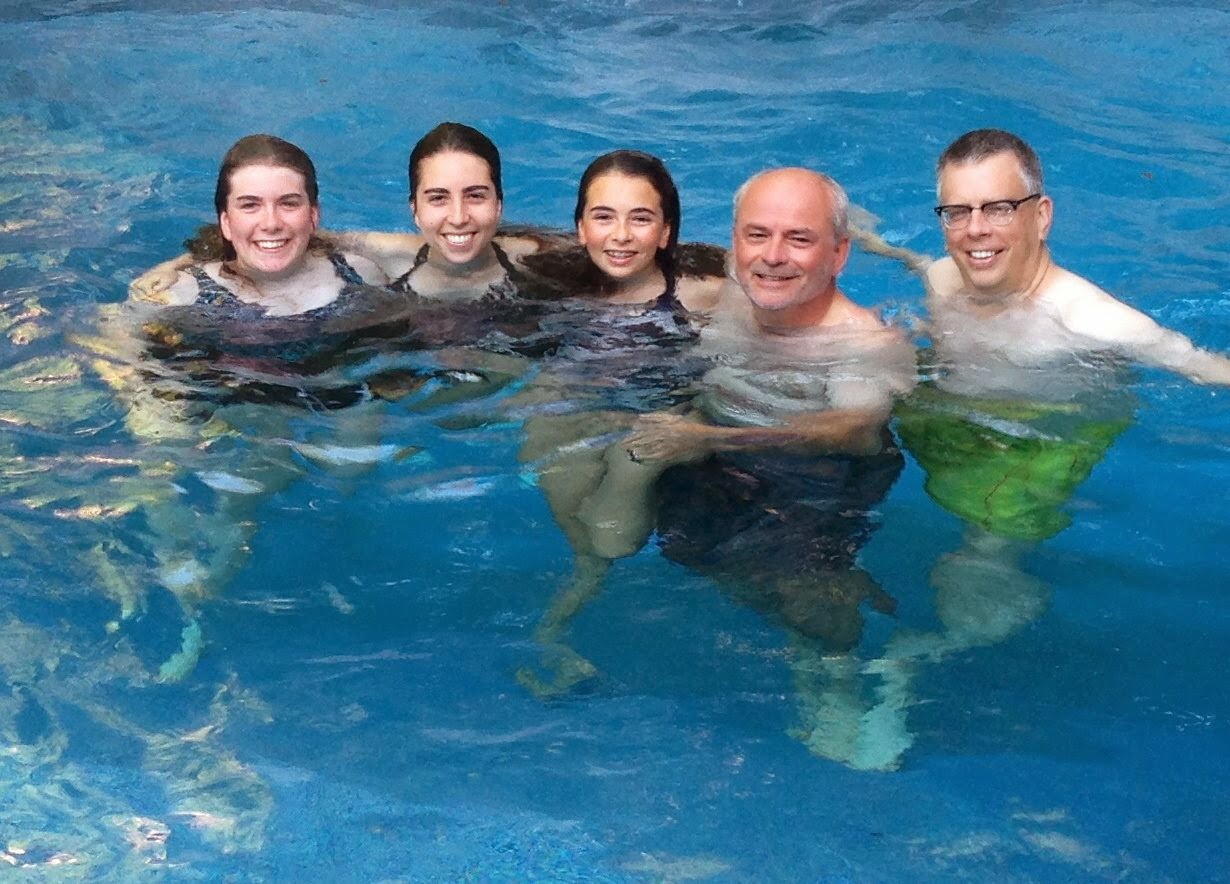 The Jays have lived in Cincinnati, China and Switzerland over the past fourteen years, but they come back to Canada for the summer and at Christmas, and they always generously invite us to their cottage. But this summer, it just wasn’t going to work. Our girls were working at camp from mid-June until the end of August, and the Jays were fitting the cottage in between trips to Halifax, Cincinnati, Brazil, and Panama. Garth and I did our best to match up our calendars, with no luck.

Then in the final email, Garth said, “Well, it looks like the only way we can work in a visit is if I swing by after I drop Colleen off at the airport on the 18th. Ha! Just kidding – I’m dropping her off at 5 a.m.”

To which I responded, “We’ll host you, as long as I can blog about it.”

Given that you’re reading this, you can probably guess his answer. His girls were good sports, and they all decided to come along, as long as they could go swimming.

And in the interests of complete disclosure, I have to tell you that it’s the first time I’ve invited guests for 5:30 a.m, and had them show up early. (5:28, if you’re counting.) 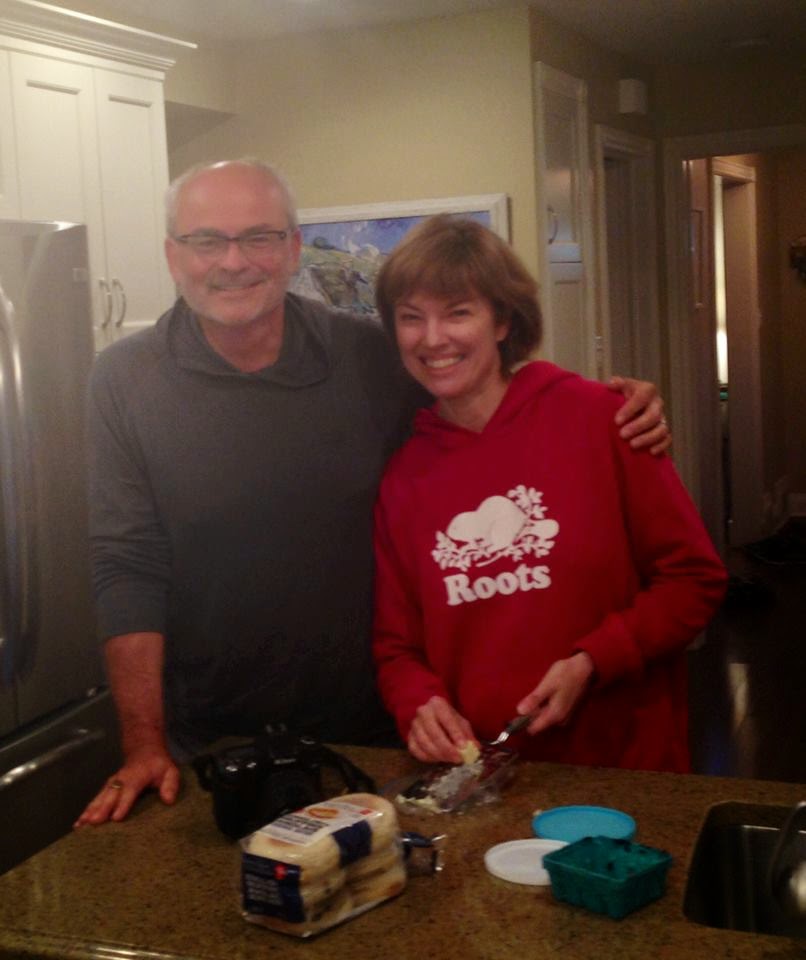 We swam, we ate, we talked. We played pool games, we laughed. We did all of this super-quietly, because presumably our neighbours were still asleep.

Garth’s favourite sentences start with, “Do you want to have a contest…?” which is how pictures like this happen: 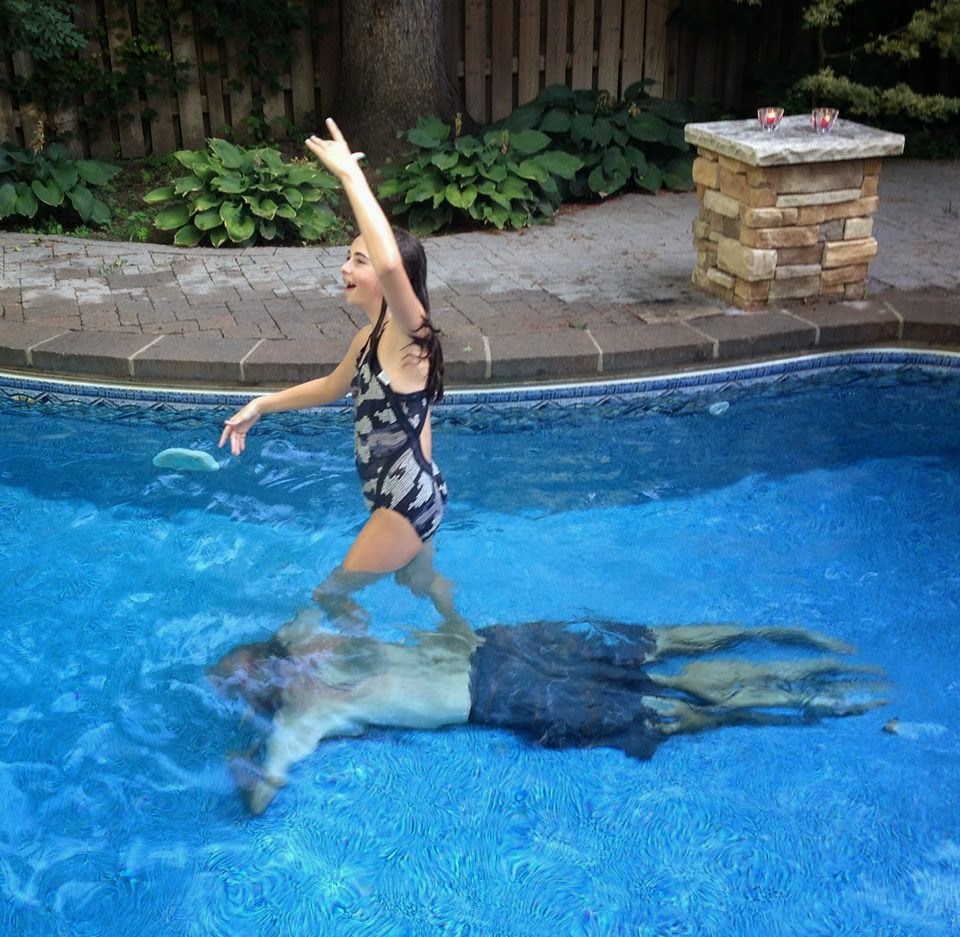 (Garth was a willing participant in this photo, and was conscious both before and after it was taken.)
We had a wonderful time, and the only disappointment was the absence of three family members – Colleen, who was en route to a meeting, and our girls. I’ve promised everyone that the next time we get together before the sun is up, no one will have a silly excuse like “I’m working.”
So what do you serve your guests for a really early meal? Anything you can prepare in advance. I tried two new recipes: granola, which I made the afternoon before; and a breakfast casserole, which I assembled the night before and put in the oven as soon as I got up on Monday. I loved them both, and will definitely make them again.
Just not at 5:28 a.m. 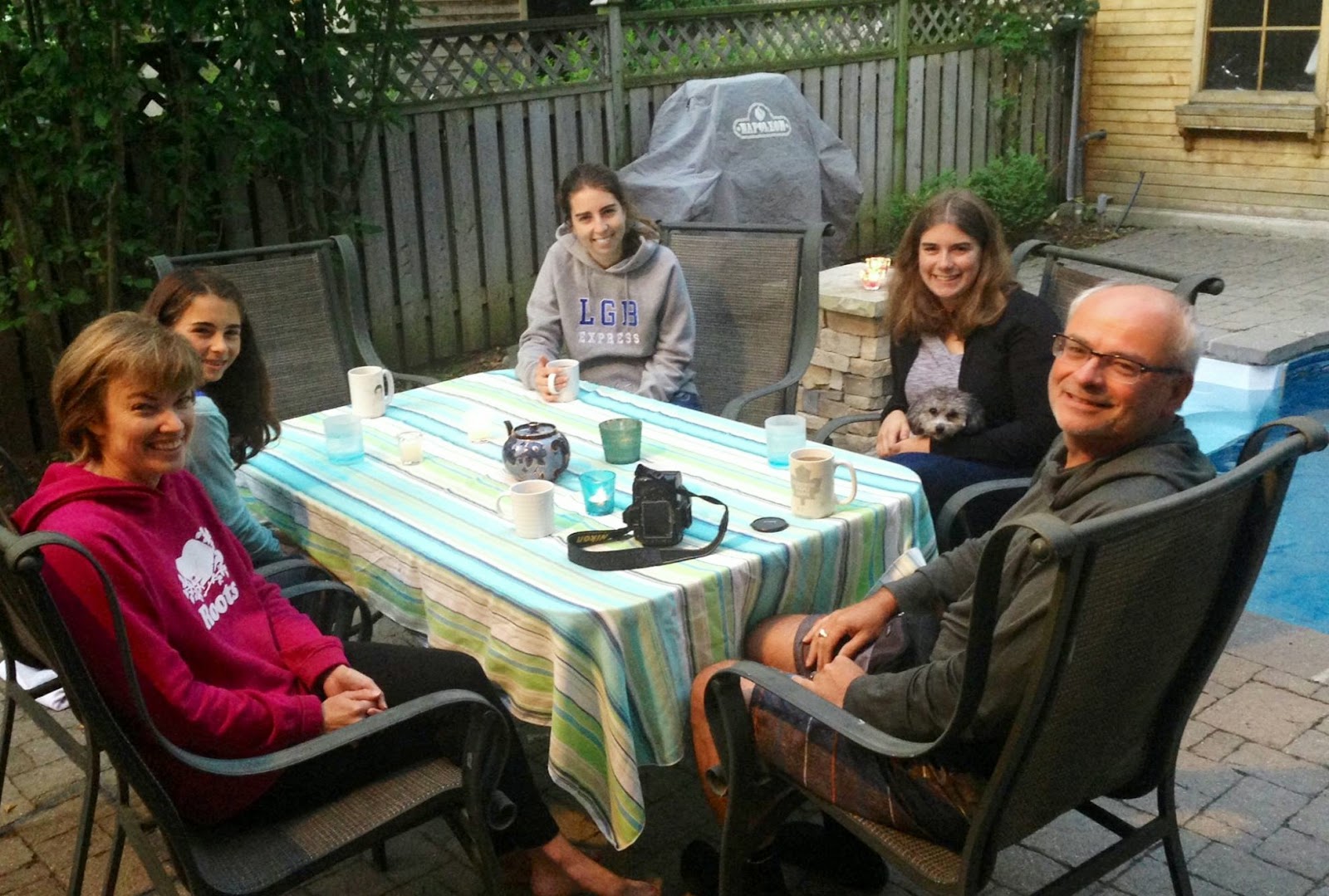 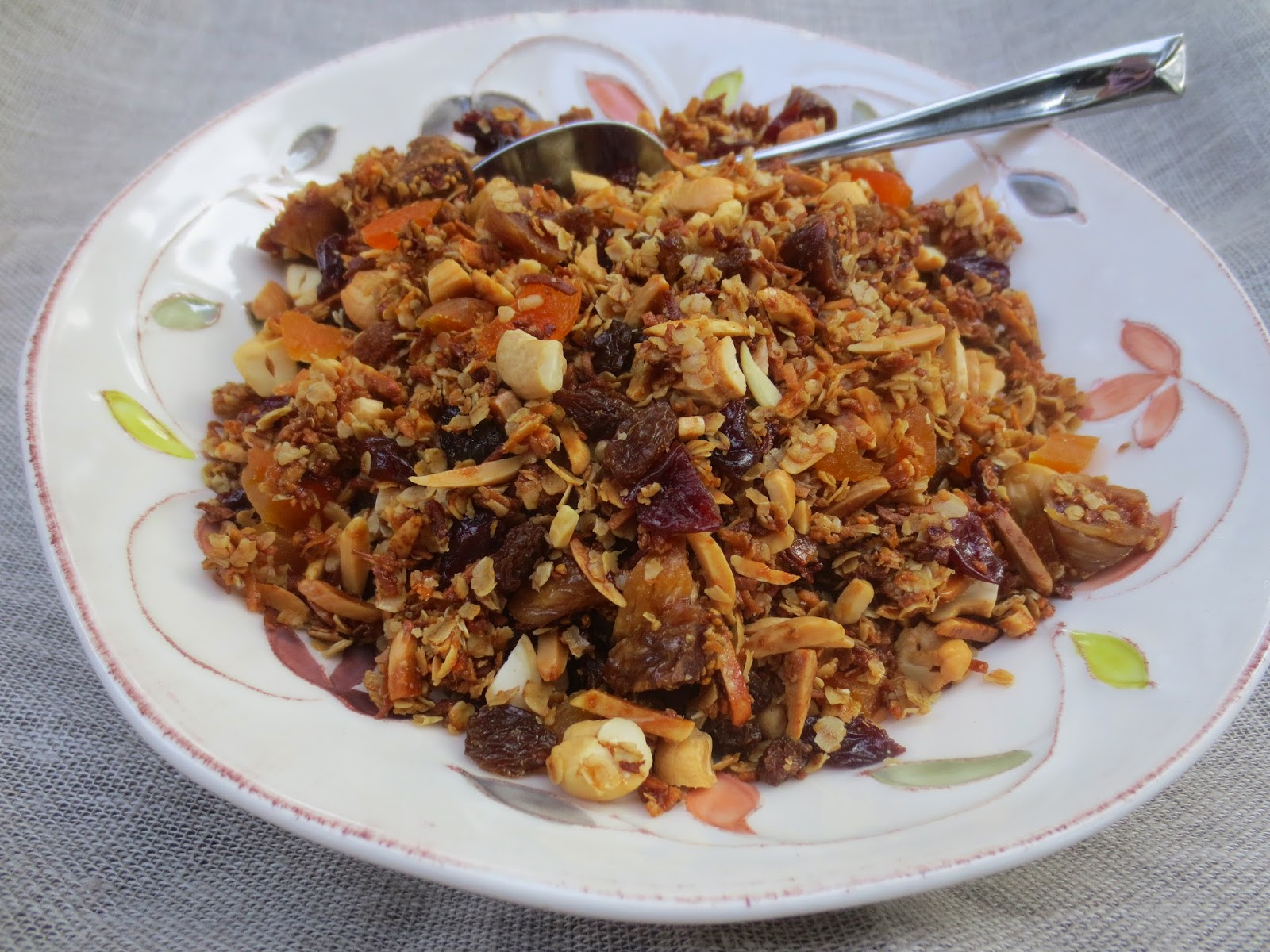 Homemade Granola
(from Ina Garten; I halved her recipe and still got a huge batch, but if you’re serving a crowd, see her original recipe.)

Preheat oven to 350 degrees.
Toss oats, coconut, and almonds together in a large bowl. Whisk together the oil and honey in a small bowl. Pour liquids over the oat mixture and stir until all the oats and nuts are coated. Pour onto a 13” x 18” sheet pan. Bake, stirring occasionally with a spatula, until the mixture turns a nice, even golden brown, 25 – 30 minutes.
Remove the granola from the oven and let cool, stirring occasionally. Add the apricots, figs, cherries, raisins and cashews. Store the cooled granola in an airtight container. 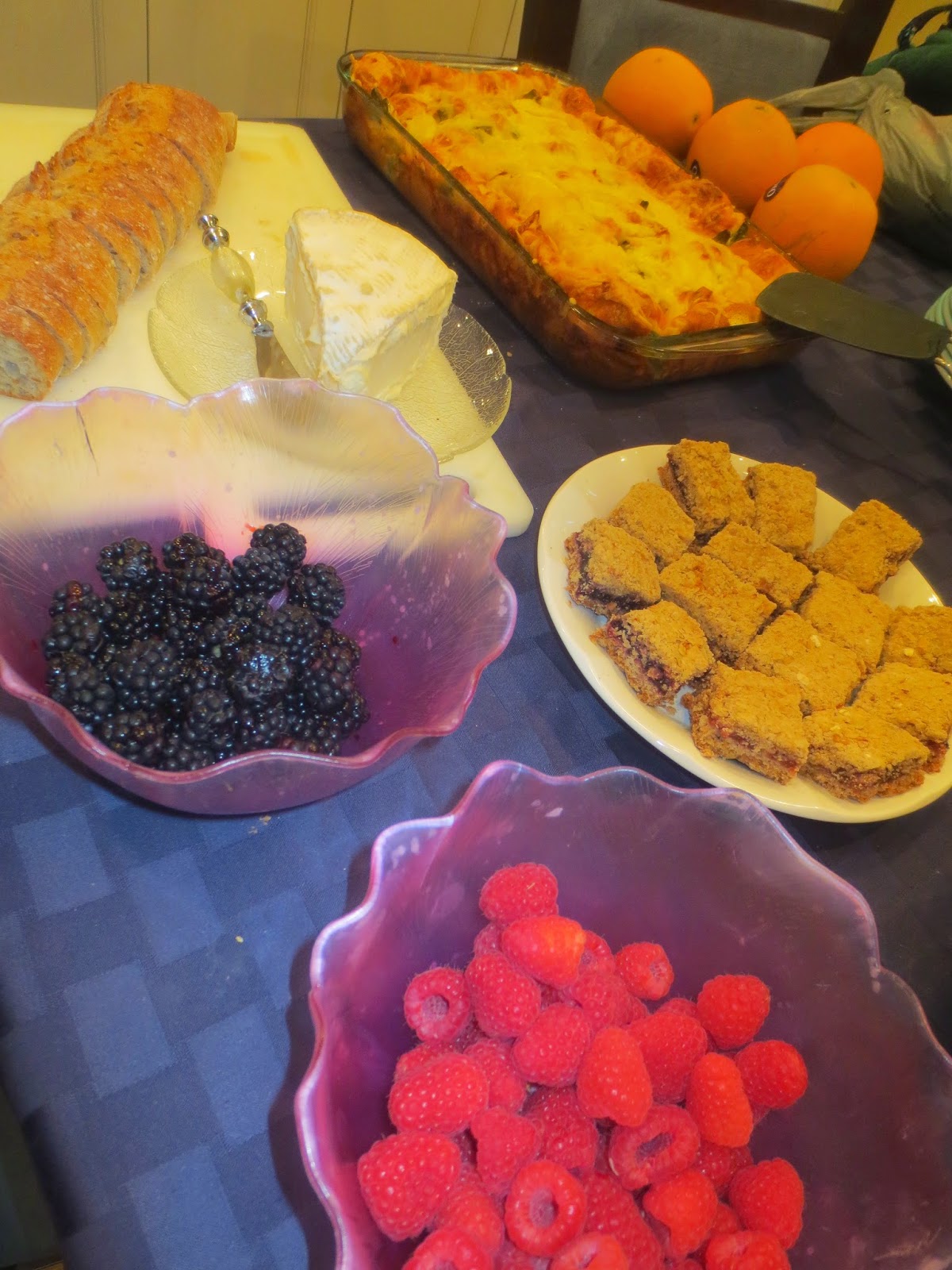 In skillet, melt butter over medium heat; cook asparagus and shallots, stirring occasionally, until asparagus is tender-crisp, about 6 minutes.

In lightly greased 13″ x 9″ baking dish, toss together asparagus mixture, bread, half of the cheese and the parsley.

Whisk together eggs, milk, mustard, salt and pepper; pour over bread mixture, pressing to submerge. Sprinkle with remaining cheese. Cover with plastic wrap and refrigerate for 1 hour, or up to 24 hours.

Uncover and bake in 350 degrees oven until puffed, golden and set enough that centre does not jiggle when gently shaken, about 1 hour. Let cook for 10 minutes before cutting into squares.