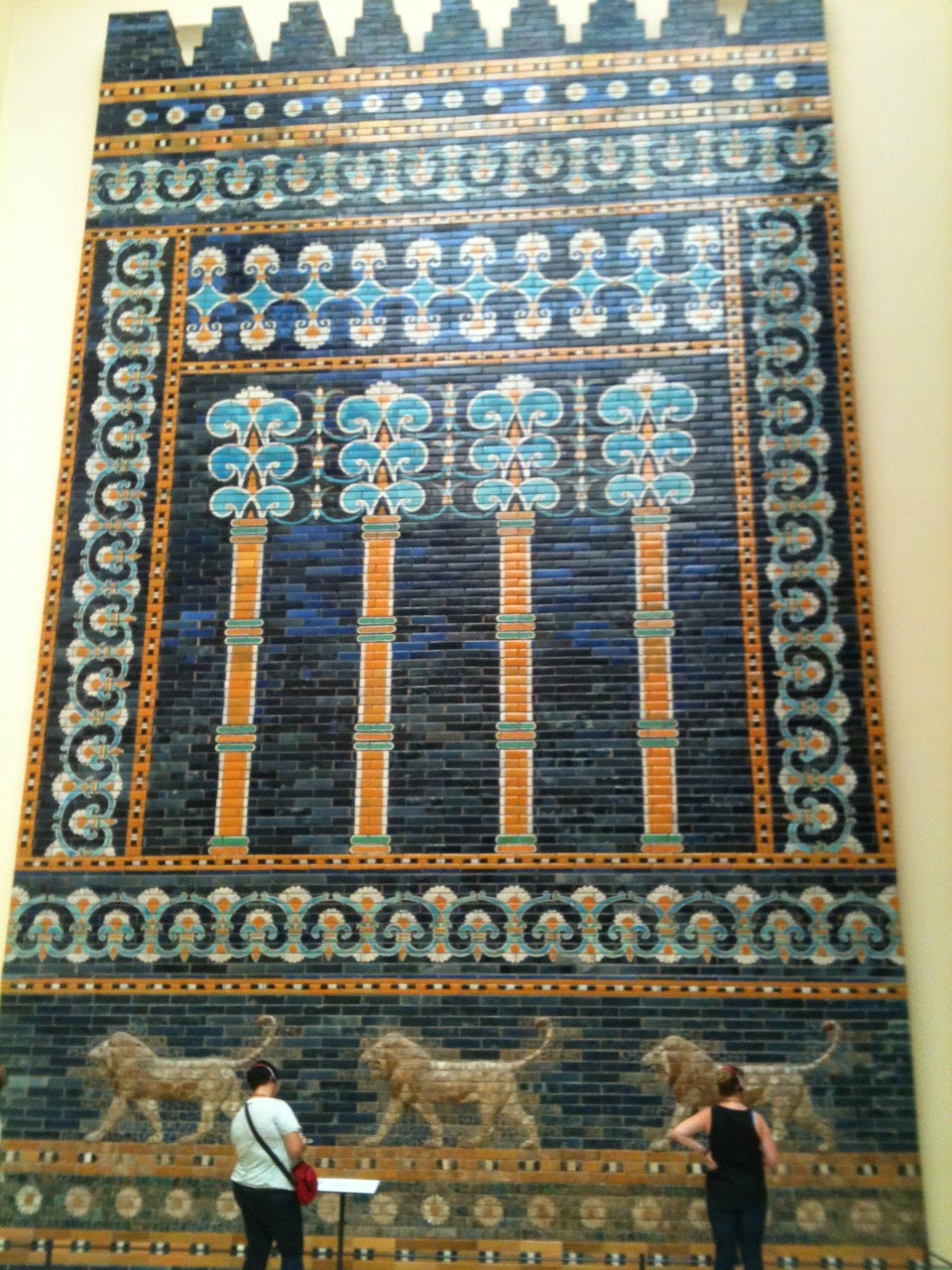 Museum Island. That’s the kind of phrase that makes my culture-geek heart sing. “Museum Island” appeals to me in the same way “secret clubhouse” did when I was ten.
Museum Island is located in the middle of Berlin, connected to the mainland on either shore by a series of short bridges. It’s home to five museums, settled side by side like a bookcase of culture. Given the opportunity, I could have visited every one of them. But mindful of a short time in a fabulous city (and a husband who perhaps wanted to do a few other things in Berlin), I settled on the two I longed most to see, the Pergamon and the Neues. 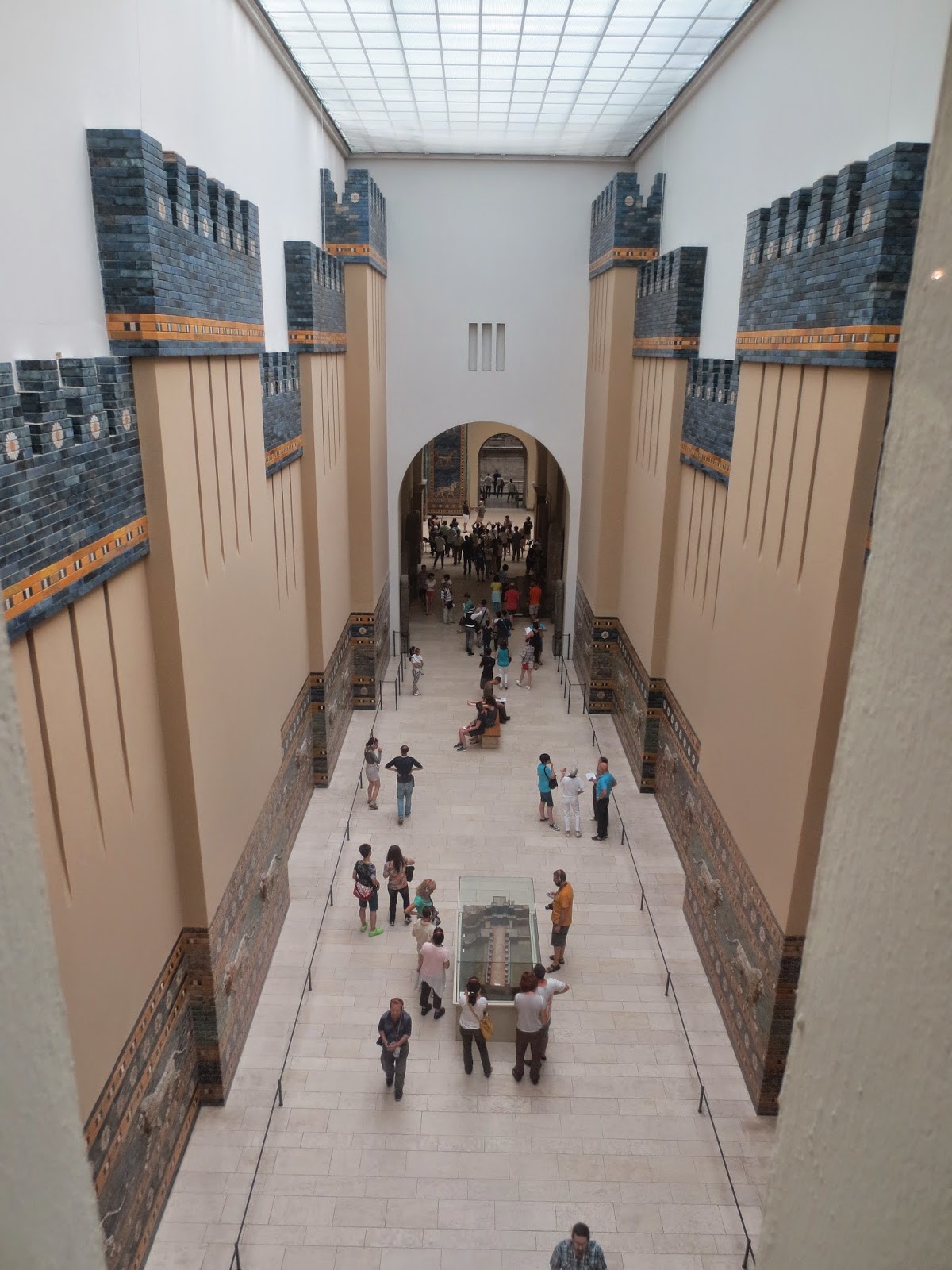 This week I’ll be writing about what we saw in the Pergamon Museum. I was so excited to see this collection that I ordered tickets online about a minute after I’d bought our flights. This was complicated by the fact that the website was in German, a language which I do not speak. Every stage of the ticket purchase (and there were many stages) had to be processed through Google Translate, so I knew I was buying tickets to see the exhibits, and not, for example, the exhibits themselves.
The challenge paid off amply. The majesty of these exhibits was undeniable, and their sense of poetry was breathtaking. Every one of them had a story to tell: 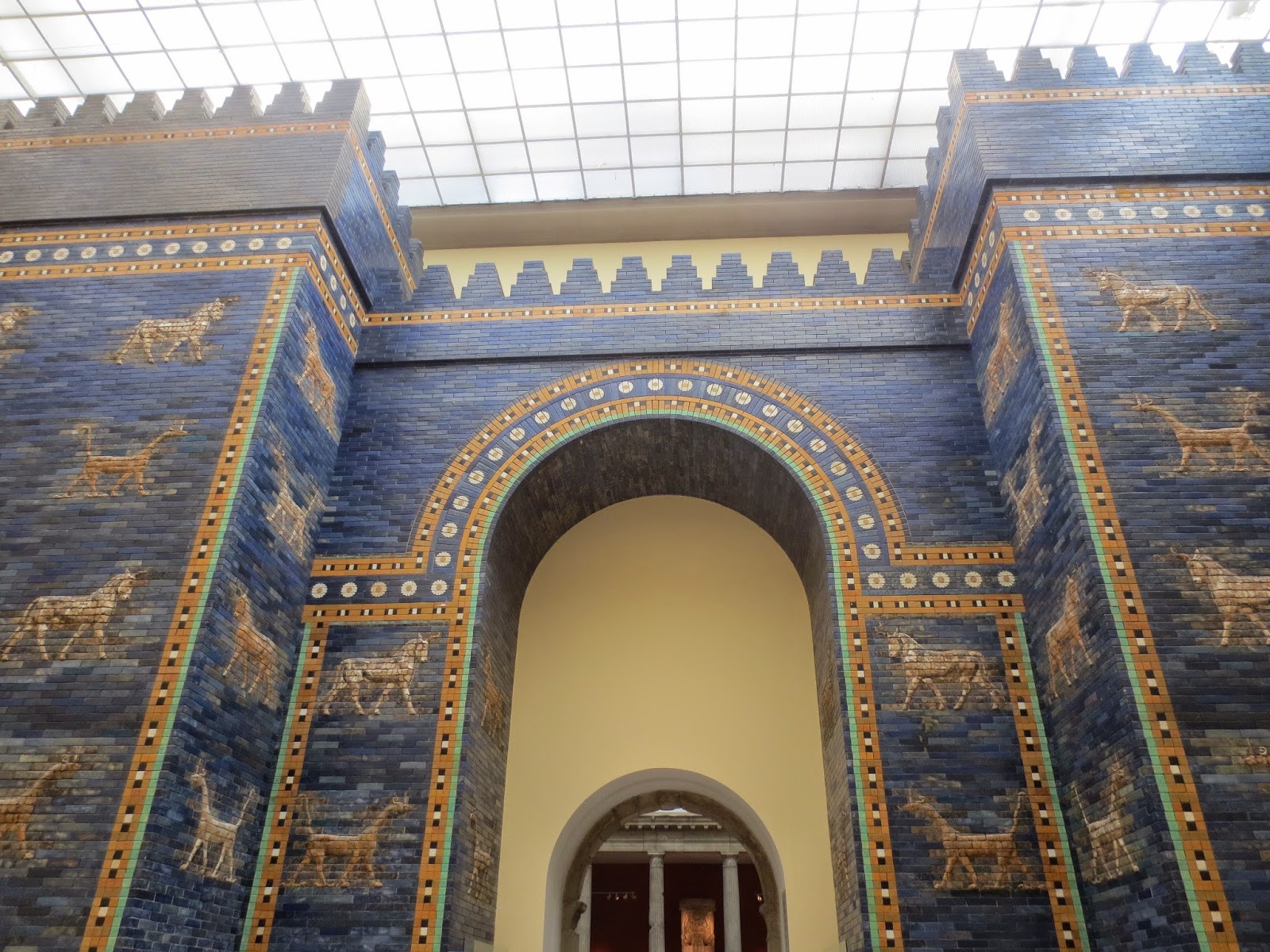 The Ishtar Gate is one of the most magnificent things I have seen, anywhere. It was built by King Nebuchadnezzar as one of the gates to the city-state of Babylon, and was named after the goddess Ishtar, the Mesopotamian goddess of love. The gates were erected in 575 BCE to impress and intimidate visitors to the city, and no doubt they did both. Nebuchadnezzar was intent on beautifying Babylon, and also commissioned the Hanging Gardens, one of the seven Ancient Wonders of the World. The Ishtar Gate was originally one of the seven wonders, but was later replaced by the Lighthouse of Alexandria.
The gate on display is actually the smaller, front part at nearly 50 feet high. The taller rear portion was too large to display and remains in storage. 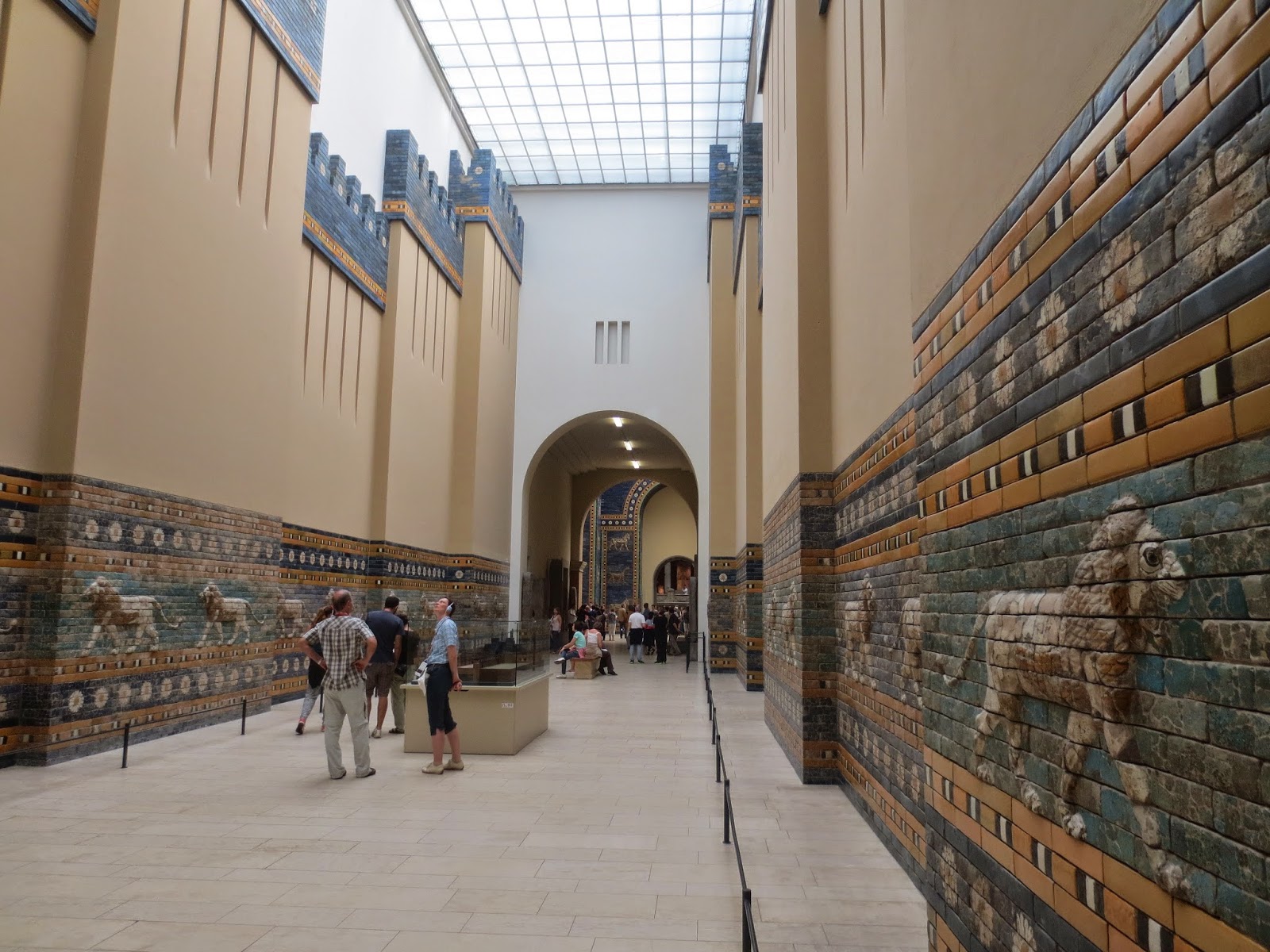 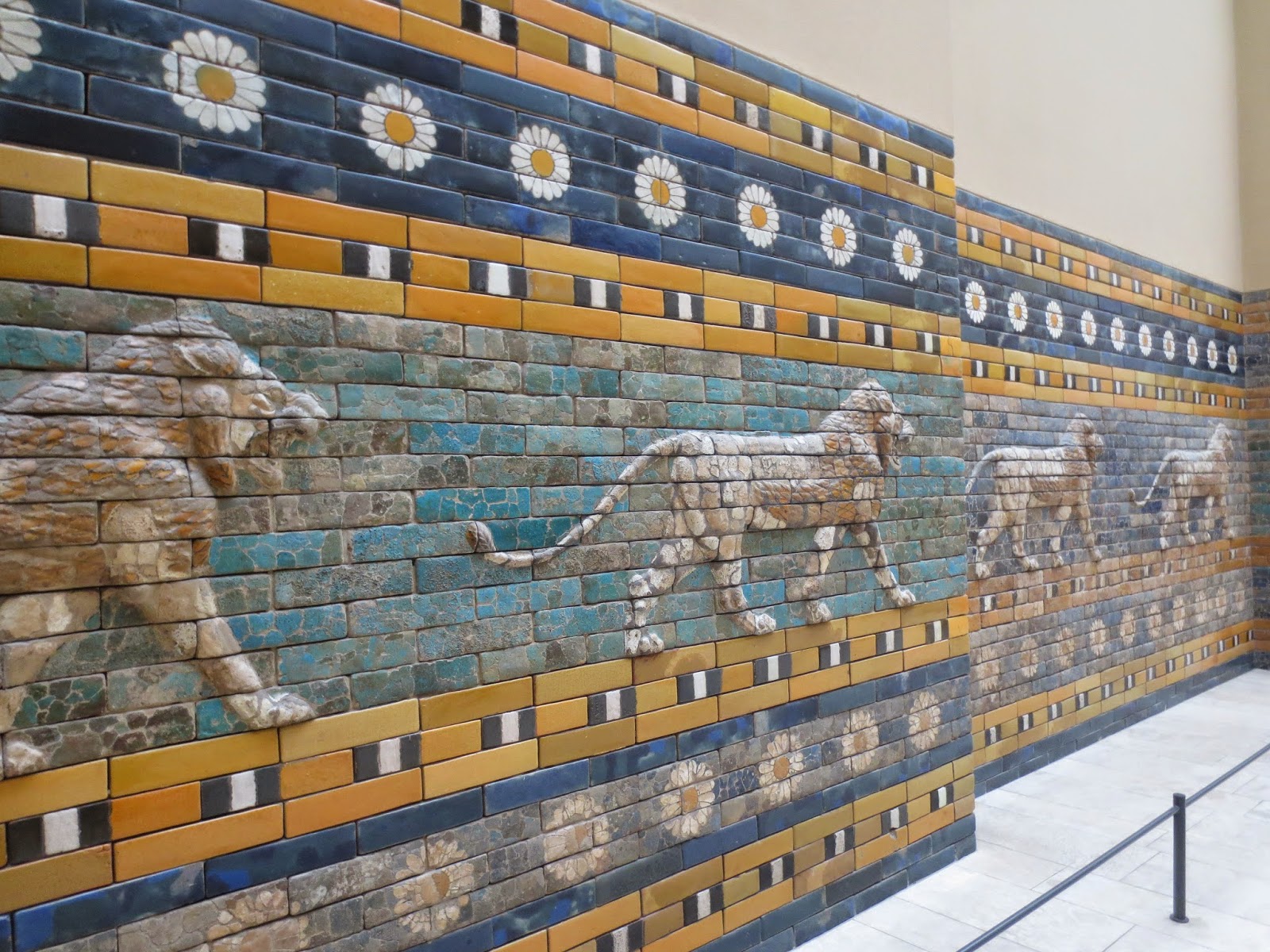 Almost as impressive as the Ishtar Gate is the Processional Way. This work of art spanned the avenue that led to the Ishtar Gate and is estimated to have been half a mile long, with walls up to 50 feet high. The Babylonian New Year’s celebration ran along this corridor, as statues of different deities were carried. The lions that decorated the Processional Way were thought to symbolize power and royalty. 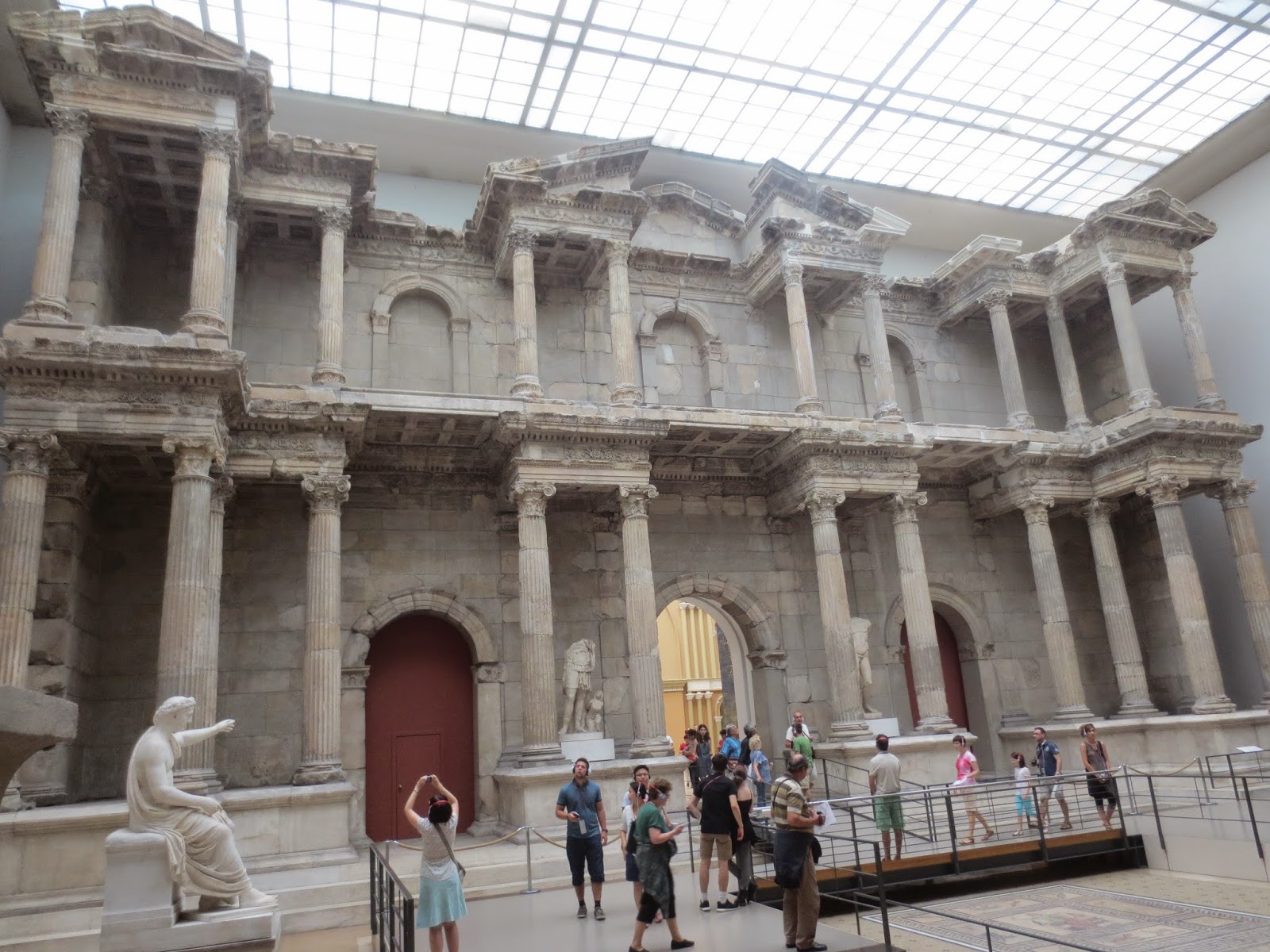 The Market Gate of Miletus is the largest reconstruction in any museum in the world. It is believed to have been built in the second century in what is now Turkey, under Roman Emperor Hadrian. Miletus was known for its philosophers and artists, and at that time was an important port city. The gate was destroyed in an earthquake in the tenth or eleventh century, and only recently restored for display. Over 50 feet tall, the marble gate bears columns and is decorated with friezes and inscriptions. 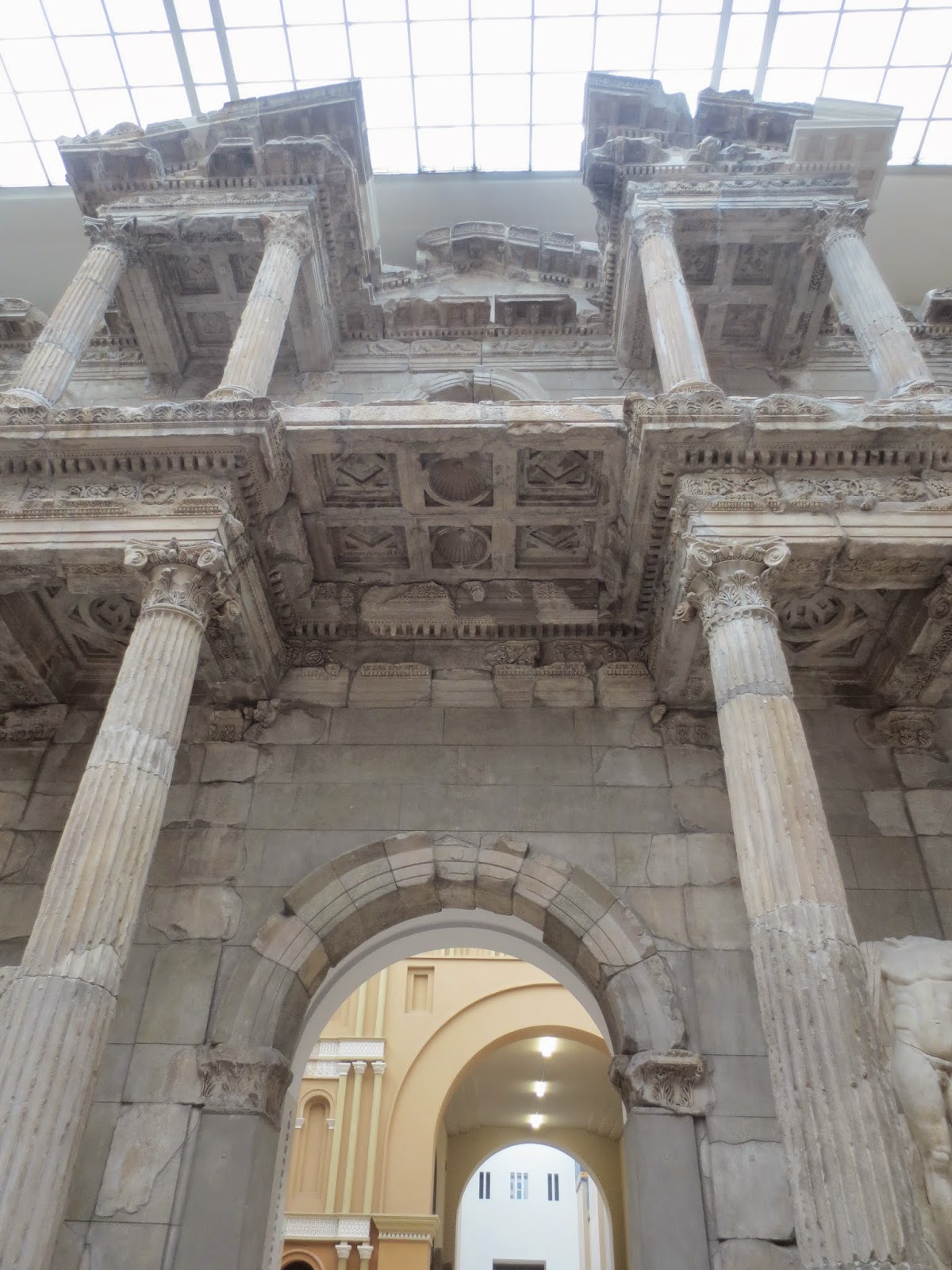 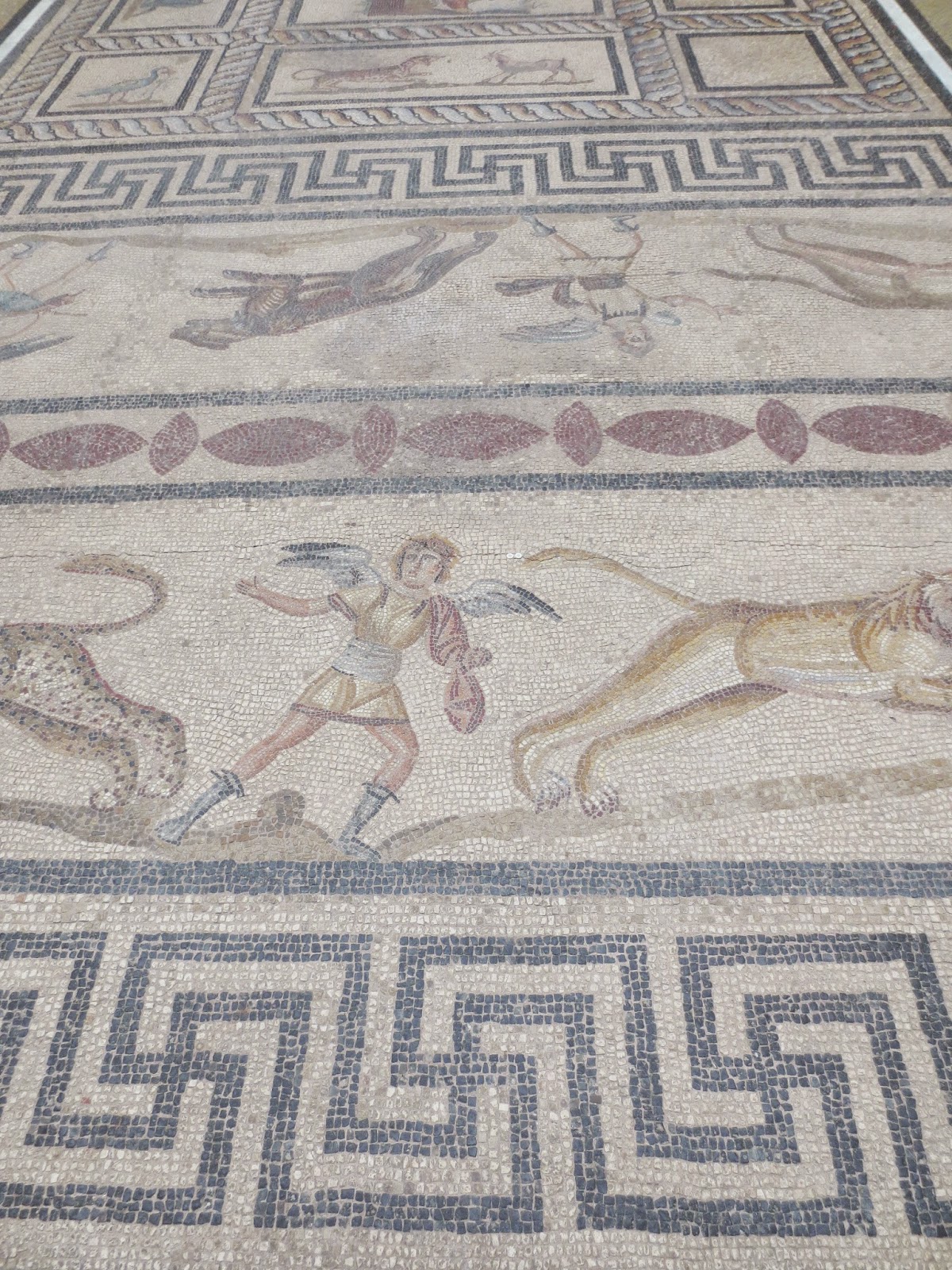 The mosaic floor is also from Miletus, and features tales of Orpheus. 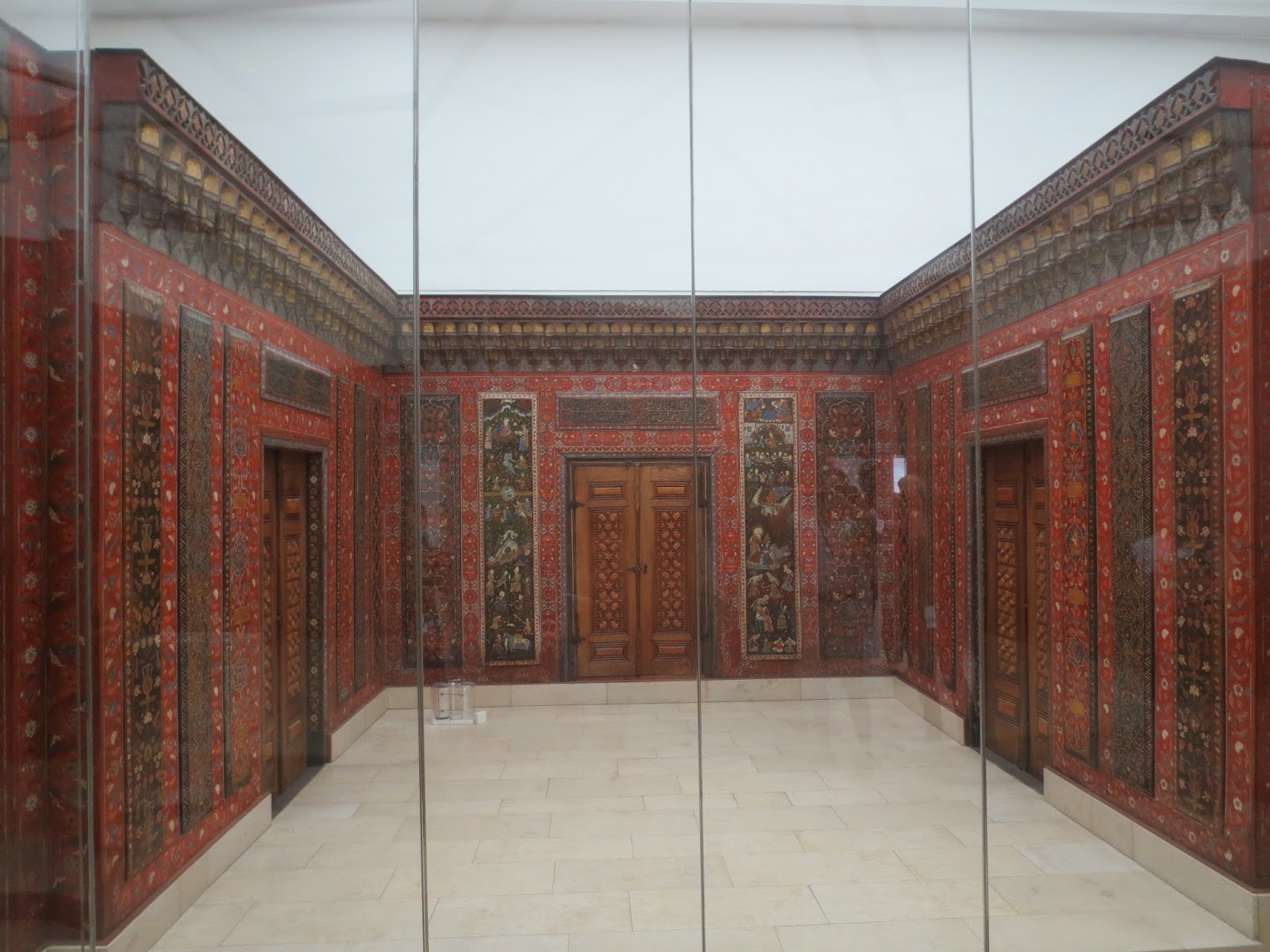 The Aleppo Room is part of a home that was located in Aleppo, Syria. Between the years 1600 and 1603, a wealthy Christian citizen commissioned craftsmen to design this entrance to his house. It includes Christian themes from the old and new testaments, as well as Persian secular themes and Islamic motifs. The impression is of a serene coexistence of various cultures and religions. 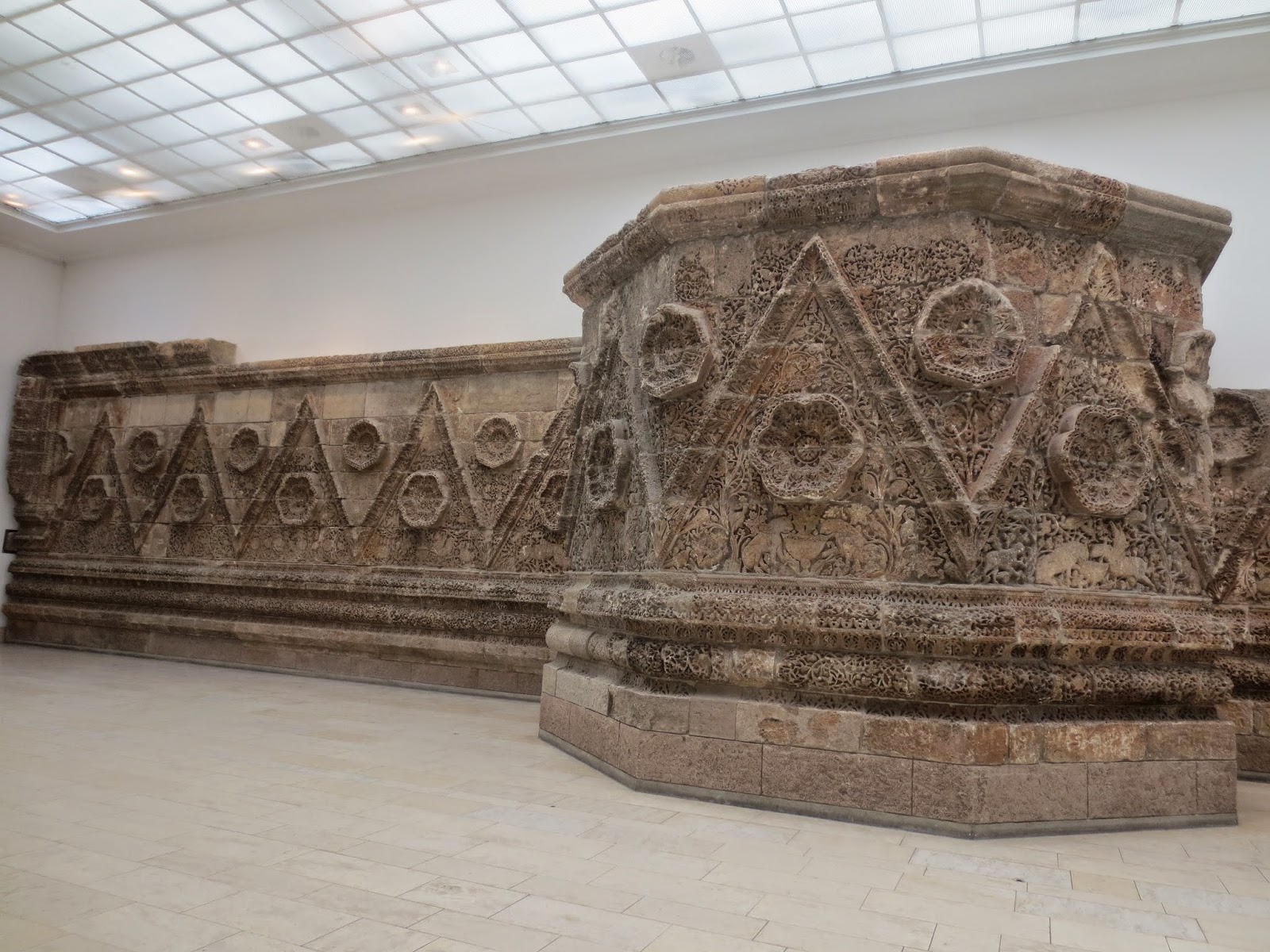 Qasr Mshatta was a winter palace in Jordan, built in the eighth century. The Mshatta Façade, on display at the Pergamon Museum, was the most ornate part of these palace walls. At sixteen feet high, the façade wraps around the display room in two distinct parts: those that decorated the secular parts of the palace display carved animals and other motifs; those that are believed to have been nearest the mosque bear rosettes and designs only, because sacred Islamic art prohibits representing living humans or animals.
Next week, I’ll write about what I saw in the Neues Museum.