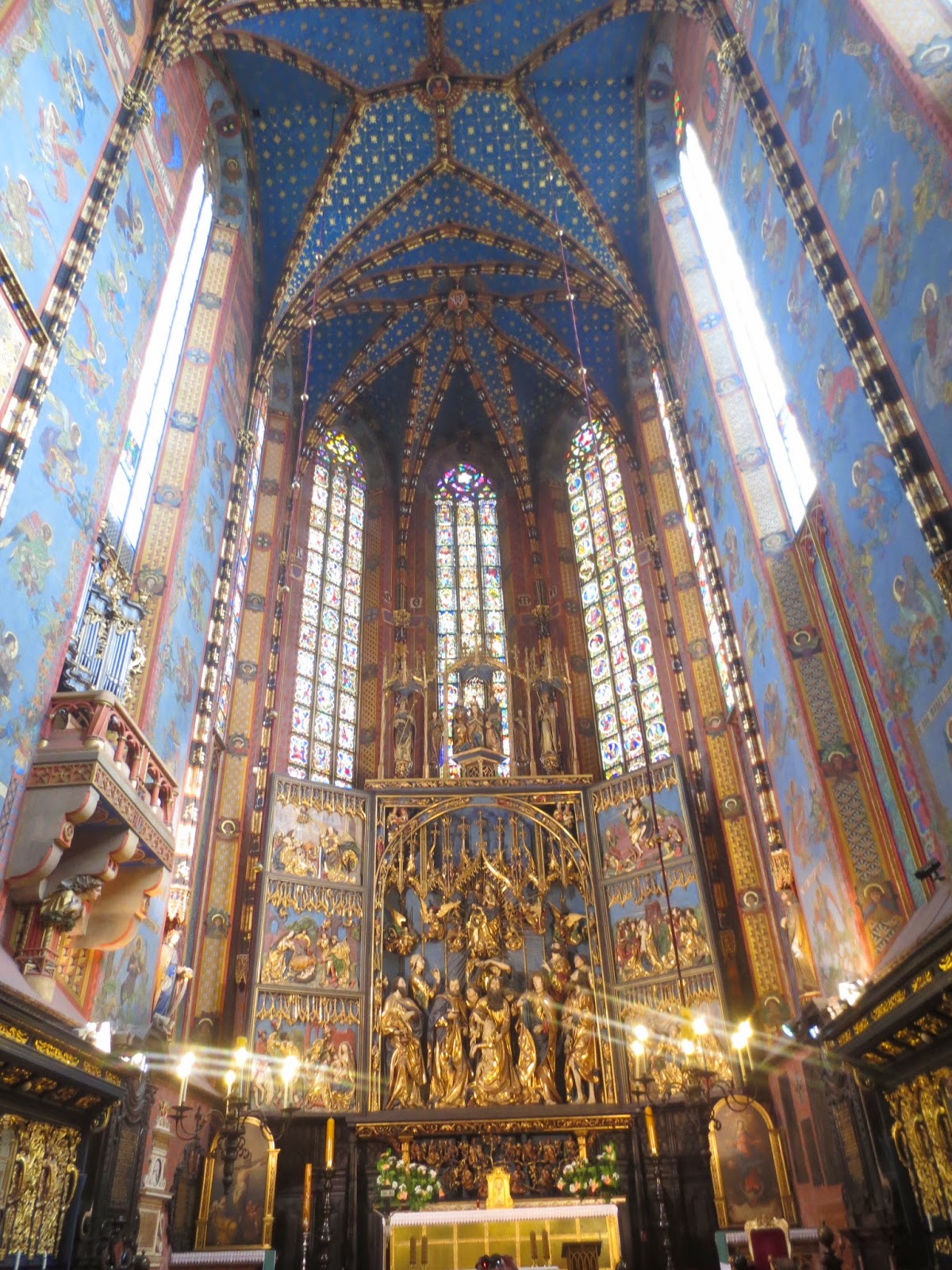 I said it last week, but it bears repeating: Europe is so magnificent that even the less popular cities are full of astonishing beauty.
Before we planned this summer’s trip, the only thing I knew about Krakow was its reputation for being the loveliest city in Poland. I couldn’t have told you anything else, but because it was a not-too-distant drive from Berlin (our other destination), it made for an intriguing choice. 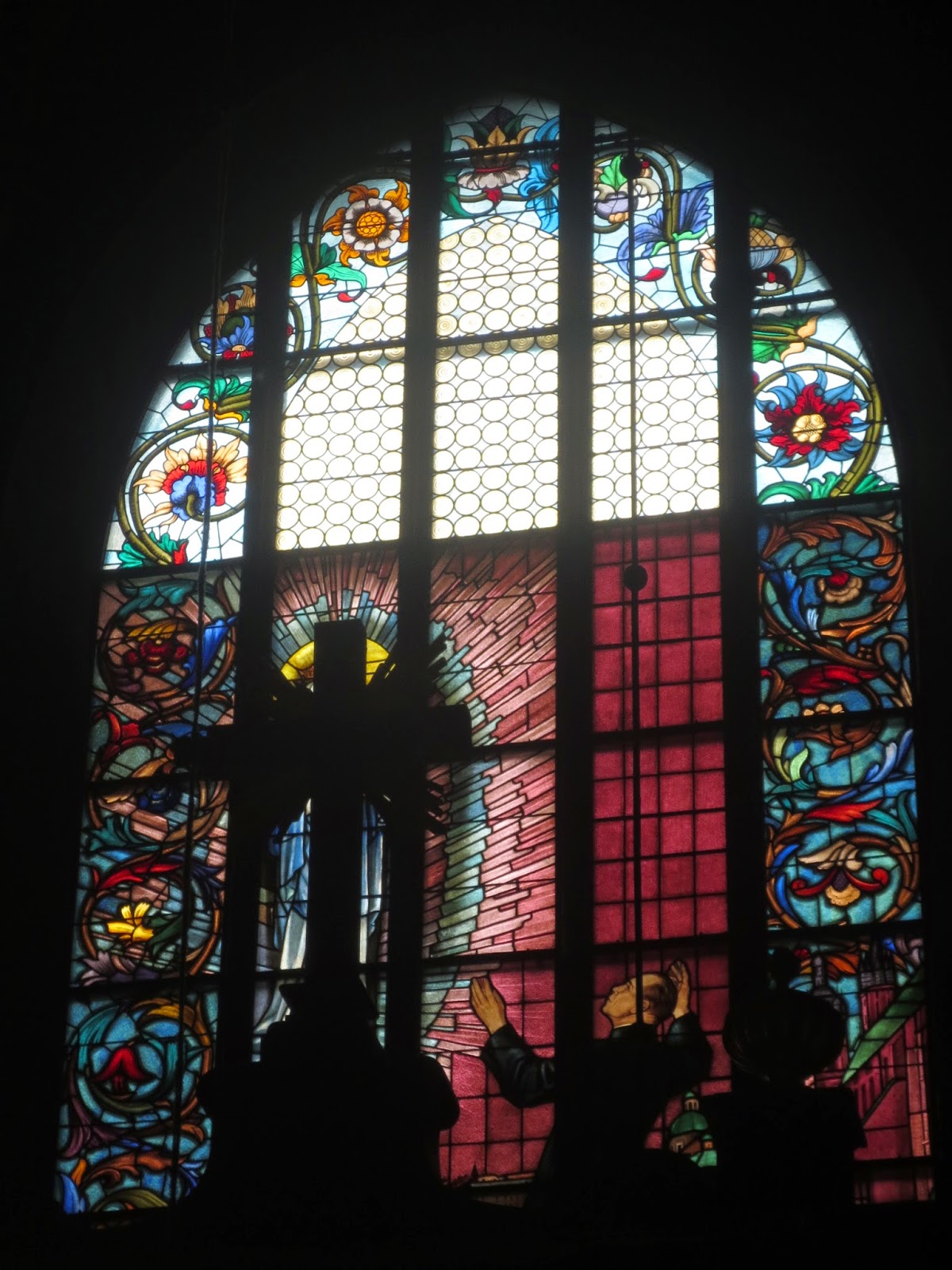 Of course I read about Krakow before we went. But even so, I was awestruck at the beauty of St. Mary’s Basilica. Located just off Krakow’s Main Market Square, we visited the basilica because, well, it was supposed to be beautiful and we were in the area. 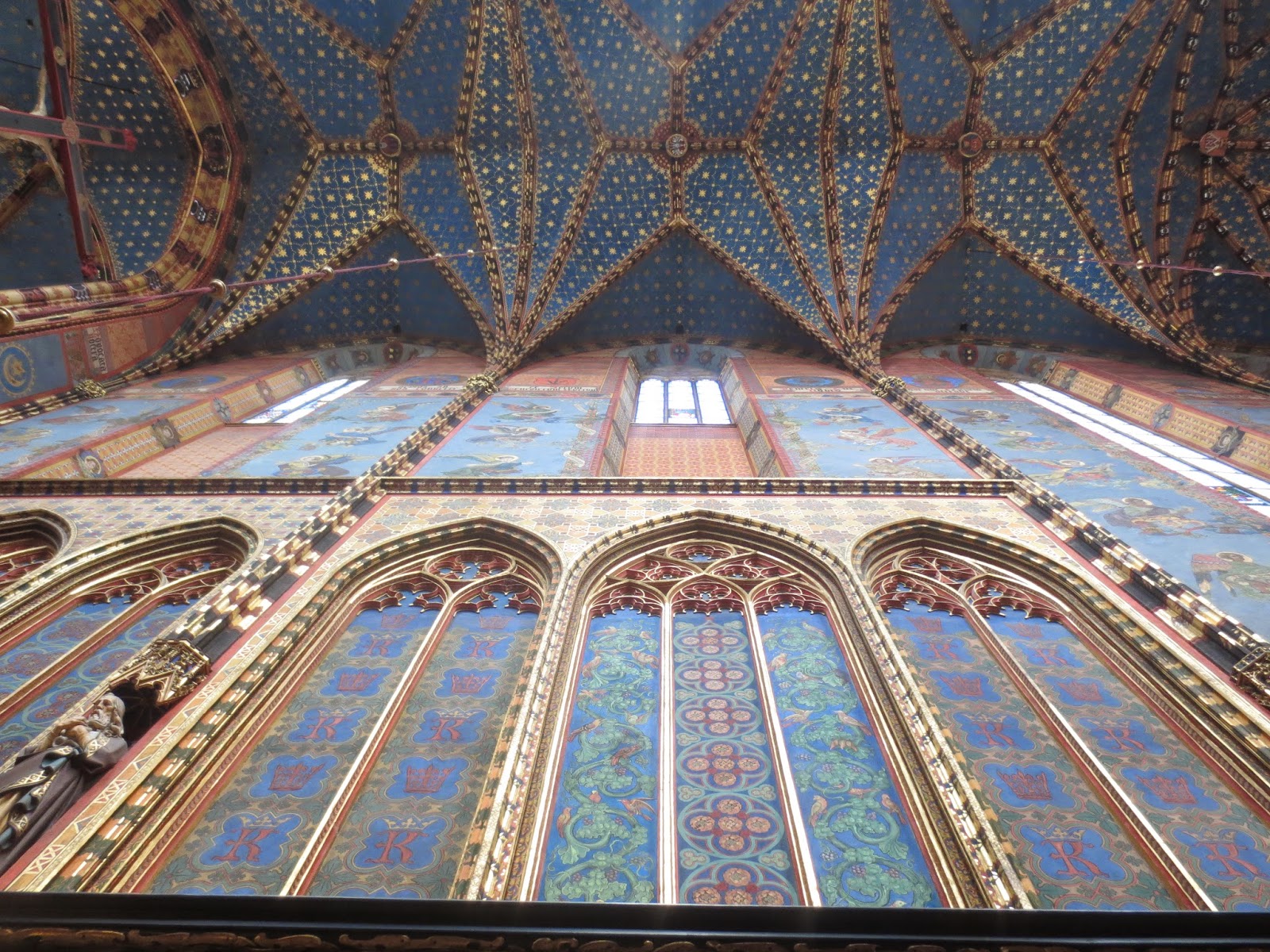 Then we walked into a place of worship that’s the equal of anything else we’ve seen. As gorgeous as Notre Dame. As impressive as Hagia Sophia. As ornate as St Petersburg’s Church on Spilled Blood.
And the trip planner, the one who blogs about her travels and constantly dreams about where she’ll go next, hadn’t even heard of it before this summer. 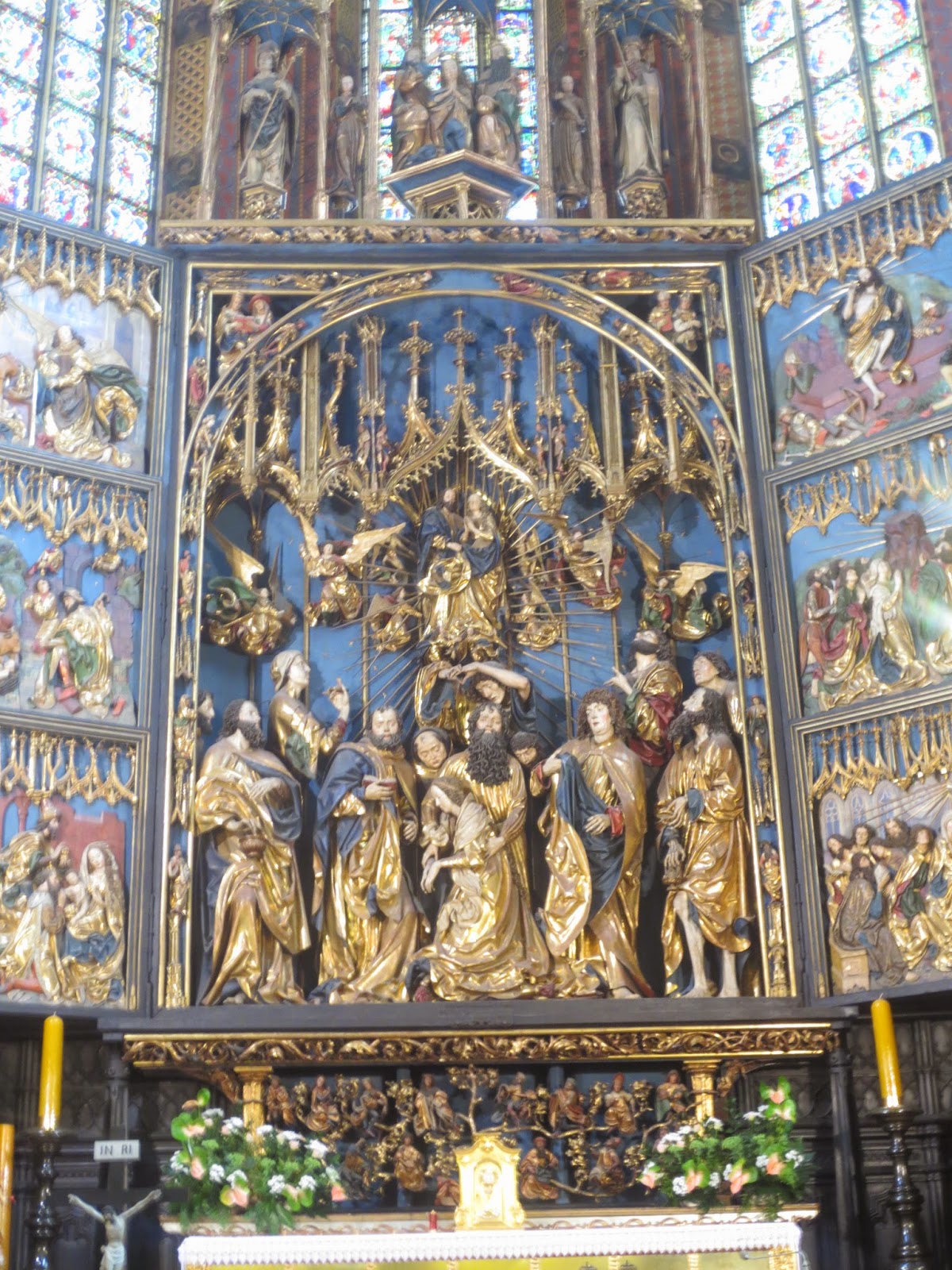 St. Mary’s is home to the largest Gothic altarpiece in the world. This three-panelled carving depicts the lives of Jesus and Mary. Carved from linden wood, the altarpiece is made up of over 200 figures and decorations. It’s considered one of Poland’s great treasures, and was dismantled and hidden for part of the Second World War, although it was later discovered and taken to Germany. It survived heavy bombing and was returned to Krakow in 1957.
The altarpiece, the vaulted stained glass windows, and the high cobalt ceilings dotted with golden stars, all added to the sense of magnificence. My words won’t do it justice, but I hope our photos can. 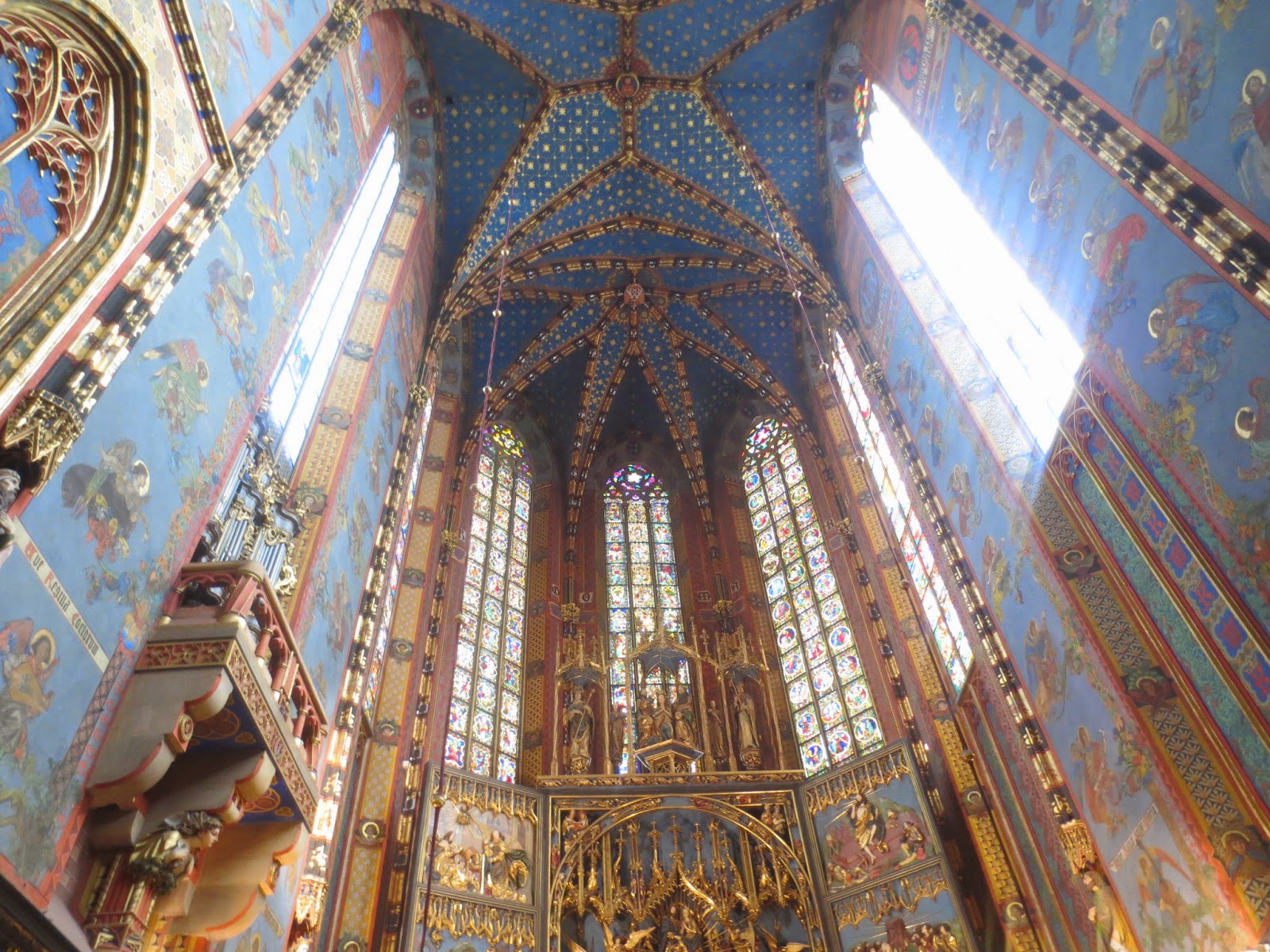 The exterior of the church is equally fascinating as what lays inside, and that’s because of the legend attached to it.
We were fortunate to be near the basilica at noon, because of the tradition that takes place there, on the hour, every hour, every day of the year. After the clock chimes, a trumpet player enters the ornate watchtower and plays a short tune four times, once each through the north, south, east and west windows. Each time he plays a few bars, then stops abruptly. (The entire ritual is played daily on Polish National Radio at noon.)

Of course, there’s a reason for that. The tune is the hejnal, a short piece of music that used to be played at the opening and closing of the city gates, and as a warning of fire or enemy activity. During the Tartar invasions in 1241, a watchman in the tower noticed invaders preparing to climb the city walls to attack it. He played his trumpet to warn the townspeople of danger. The enemies saw him and pierced his throat with an arrow in the middle of the song. But in the meantime, his warning had given Krakow citizens ample time to meet the challenge.
And in an enduring tribute, they play the shortened tune in his honour, once an hour, every day of the year.
A stunning church with a bittersweet story? It just doesn’t get any better than that.*
*Yes, there are other, more prosaic legends behind this tradition. But this is the story I like the best, and I’m sticking with it.