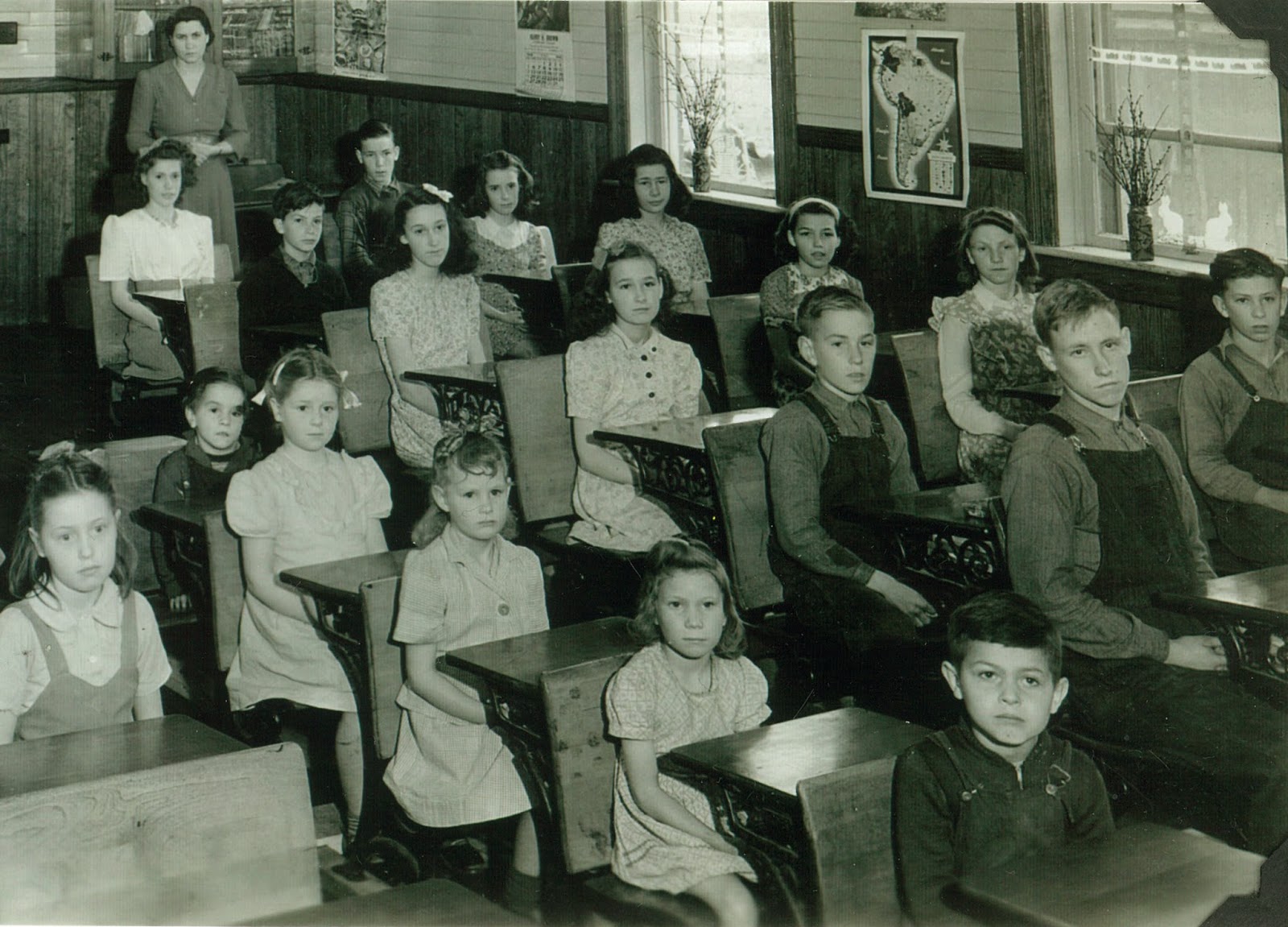 Last Sunday, I shared back-to-school photos of my daughters. This week I thought I’d show you one of my mom’s school pictures. It was taken in the school year 1945-46, in her one-room schoolhouse. My mom, Joyce Bustin (now Joyce Baker) is wearing a white bow in her hair, and sitting three from the back ahead of the teacher. Her sister, my aunt Barbara, is directly ahead of her, and their best friend Frances is at the back of the row.

I’m not the only one in my family who loves to write. My mom has written a history of her life for my daughters and their cousin Lexy. Here are a few memories of school and friendship:

“At Croton school we played Ante-I-Over (throwing the ball over the woodshed roof and then running around to the other side before the ball could be caught and we could be tagged out). We played baseball at noon and recess. A school window was often broken and we all had to chip in to pay for a new one. There were woods beside the school. In the fall, we’d rake many leaves to a corner of the fenced-in yard. The girls would build a leaf hut in one corner and the boys would build one in another corner against the fence.”

“The first morning [at their new school, after they moved]: Our clocks at the house were slow and we had arrived late. We sort of slunk into the classroom with everyone staring at us. We had about a two-mile walk to Croton School.”

“Barbara and I often played with Frances Morgan from next door. The Anne of Green Gables books were a big hit with us. Morgans didn’t have electricity. We were intrigued by the idea that Anne and Diana signalled messages to each other’s homes. Barbara and I would go upstairs to one of the bedrooms that faced Morgans’. We would pull the cord on the ceiling light to turn it on and off. Frances signalled by walking into or out of her bedroom carrying a lamp. Our signalling was rather limited for meanings and this procedure didn’t last long.”

“Our school, like others, grew a Victory Garden. We planted, hoed and watered these vegetables and they went to the war effort. Mother would give us each 25 cents a week to buy a stamp to go into a war savings certificate which was kept at school. This was a piece of paper with squares where we licked the stamps and stuck them on. When 20 stamps had been affixed, another $5.00 had been saved to help with war expenses.” 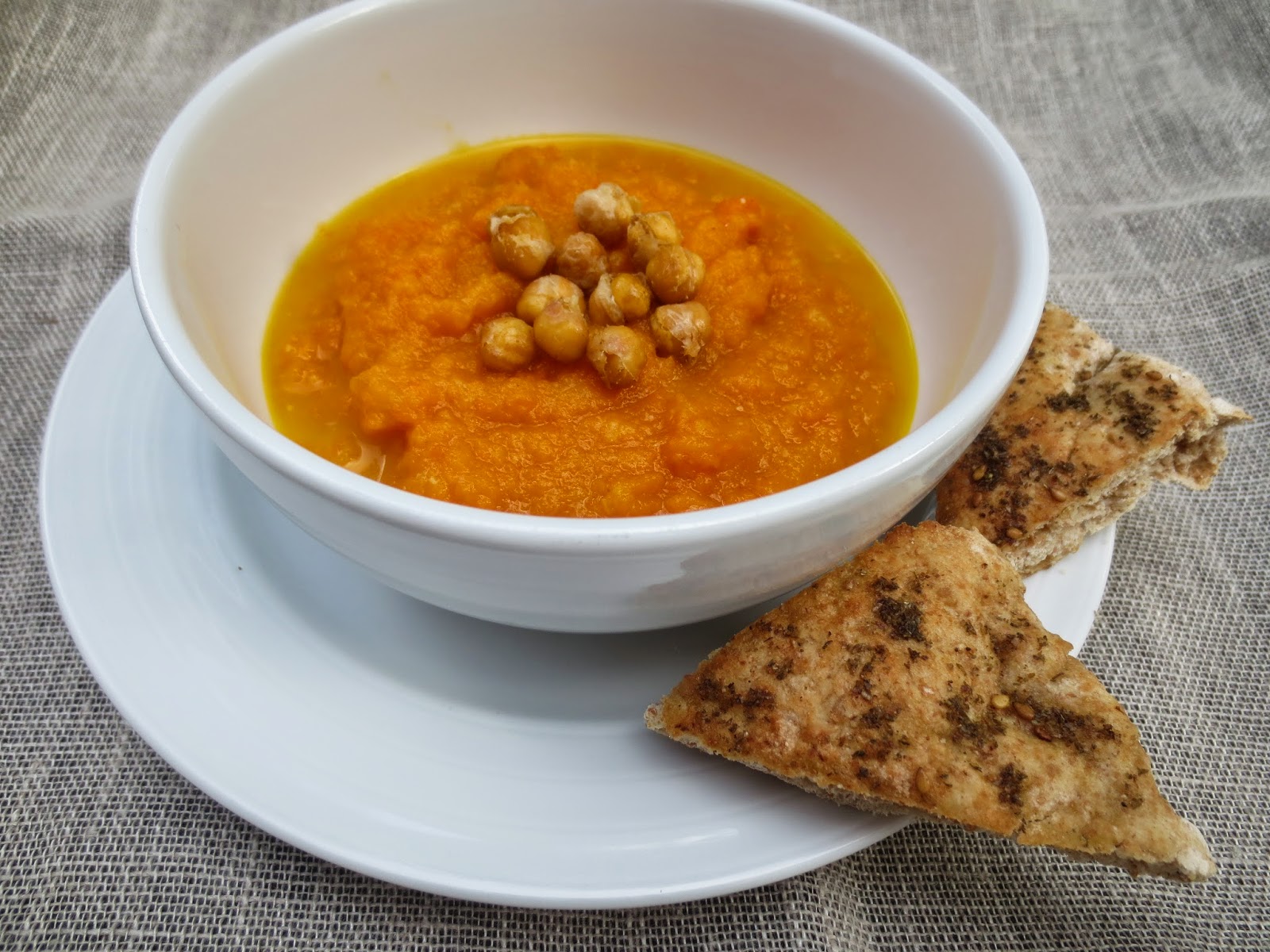 In the Second World War, Victory Gardens were common all over North America. Transporting food was expensive, and commercial canned goods were being set aside for the troops. Rationing often meant there wasn’t enough food to go around. Victory Gardens solved those problems in several ways. They were a source of both food for local communities and money for the troops. They also helped civilians, especially schoolchildren, feel like they were contributing to the war effort.

I’m sure some of the carrots grown in these gardens were tossed into soups, since that would have been an economical way to feed a family. This soup recipe might be a bit fancier than those served in wartime and post-wartime households, but it was delicious – and filling enough to power a game or two of Ante-I-Over.

Soup
2 Tbsp olive oil
2 pounds carrots, peeled and diced or thinly sliced
1 large onion, finely chopped
5 regular or 6 small garlic cloves, peeled and minced
1/4 tsp ground coriander
1/2 tsp ground cumin
1/2 tsp kosher salt or sea salt
Pinch red pepper flakes
4 cups vegetable broth
Heat olive oil in large pot over medium heat. Add carrots, onion, garlic, coriander, cumin, salt and pepper flakes, and sauté until they begin to brown, about 15 minutes.
Once vegetables have begun to brown, add broth, using it to scrape up any bits stuck to the bottom of the pot. Cover with lid and simmer until carrots are tender, stirring occasionally, about 30 minutes.
Puree soup with an immersion blender until smooth. Ladle into bowls. Sprinkle with crisped chickpeas and serve with pita wedges.
Crisped chickpeas
1 15-ounce can chickpeas, drained and patted dry on paper towels
1 Tbsp olive oil
1/2 tsp kosher salt or sea salt
1/4 tsp ground cumin
Heat oven to 425 degrees. Toss chickpeas with olive oil, salt and cumin until they’re all coated. Spread them on a baking sheet and roast until they’re browned and crisp, approximately 15 to 20 minutes. Toss them occasionally to make sure they’re toasting evenly.
Pita wedges
A few large pitas, cut into 8 wedges each
Olive oil, to brush pitas
Za’atar (a Middle Eastern spice-herb blend) or sesame seeds and sea salt, to sprinkle
Spread pita wedges on a second baking sheet and brush lightly with olive oil. Sprinkle with za’atar or a combination or sea salt and sesame seeds. Toast in the oven with chickpeas until brown at edges, about 5 minutes.
Serve soup with chickpeas on top, and pita wedges on the side.