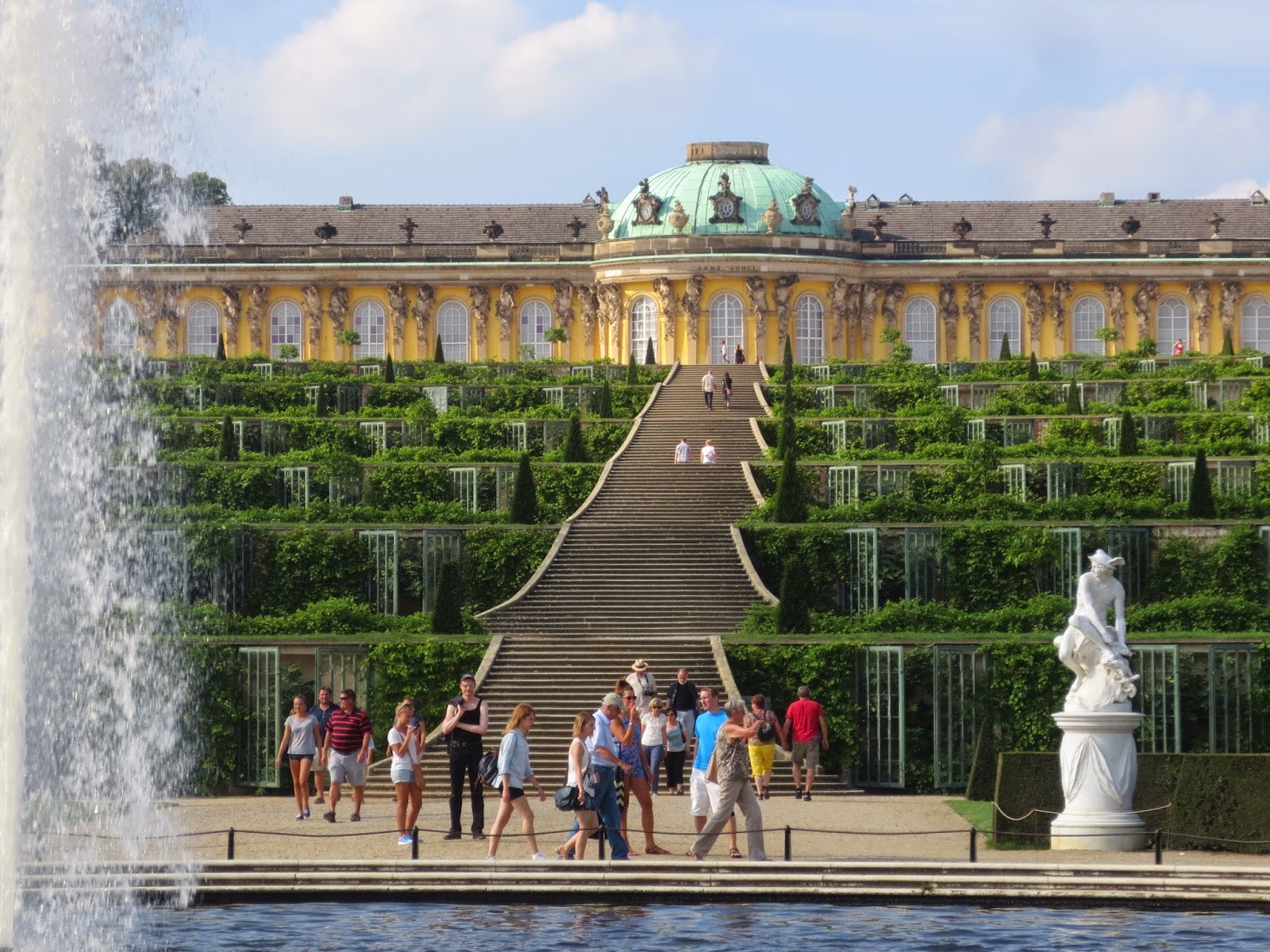 Destination: Potsdam, Germany
When we visited: August 2014
Why to go: 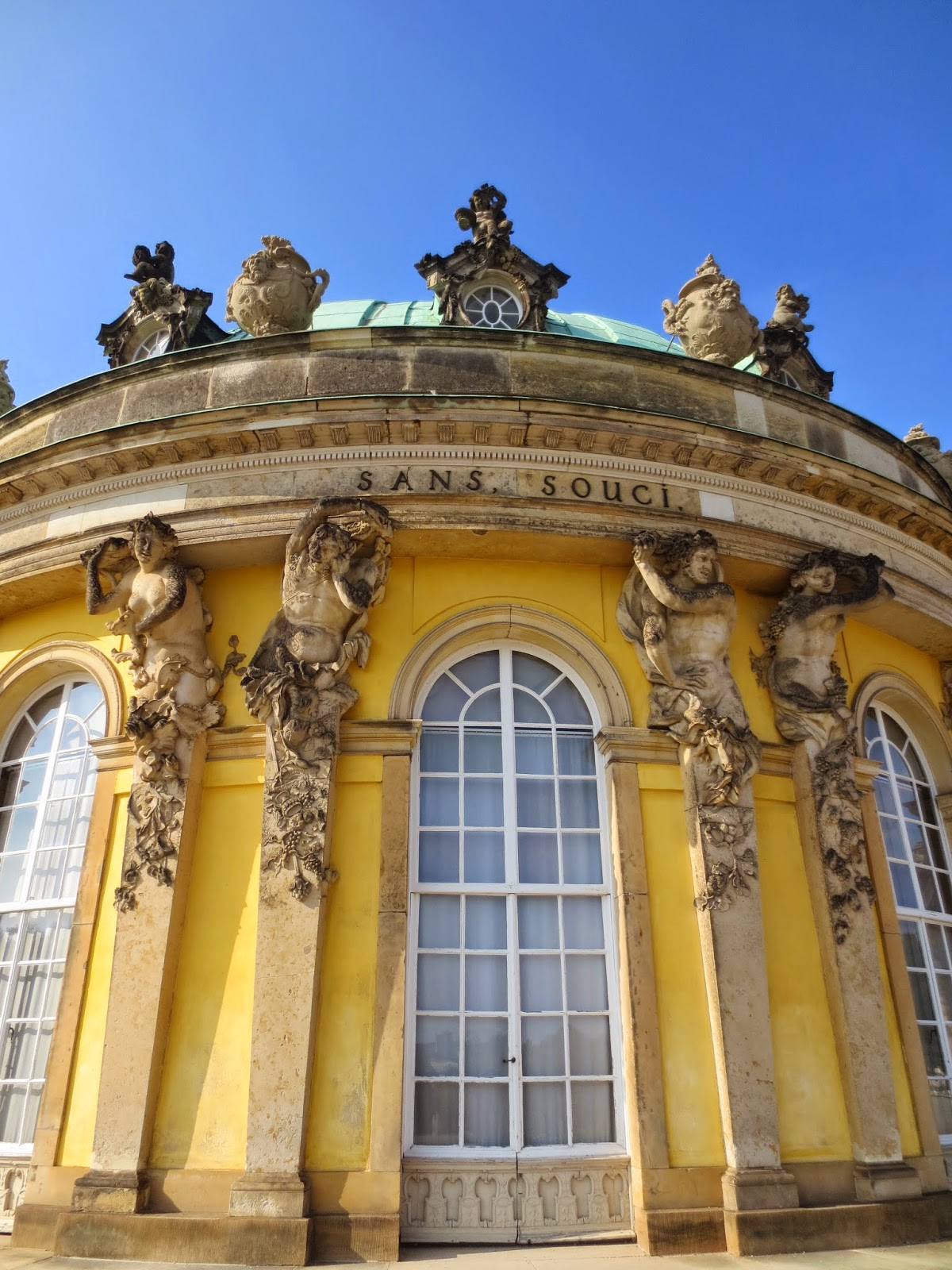 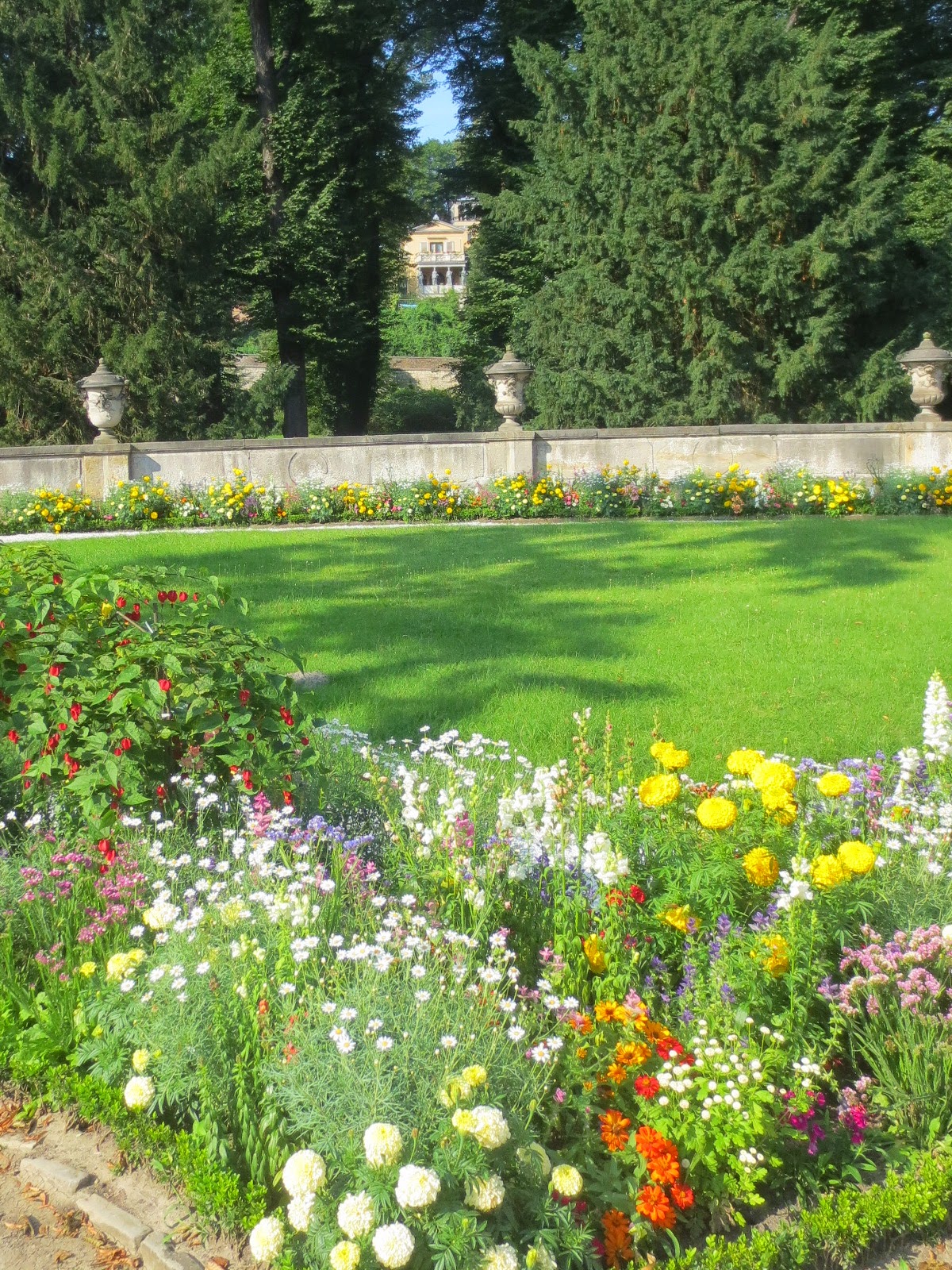 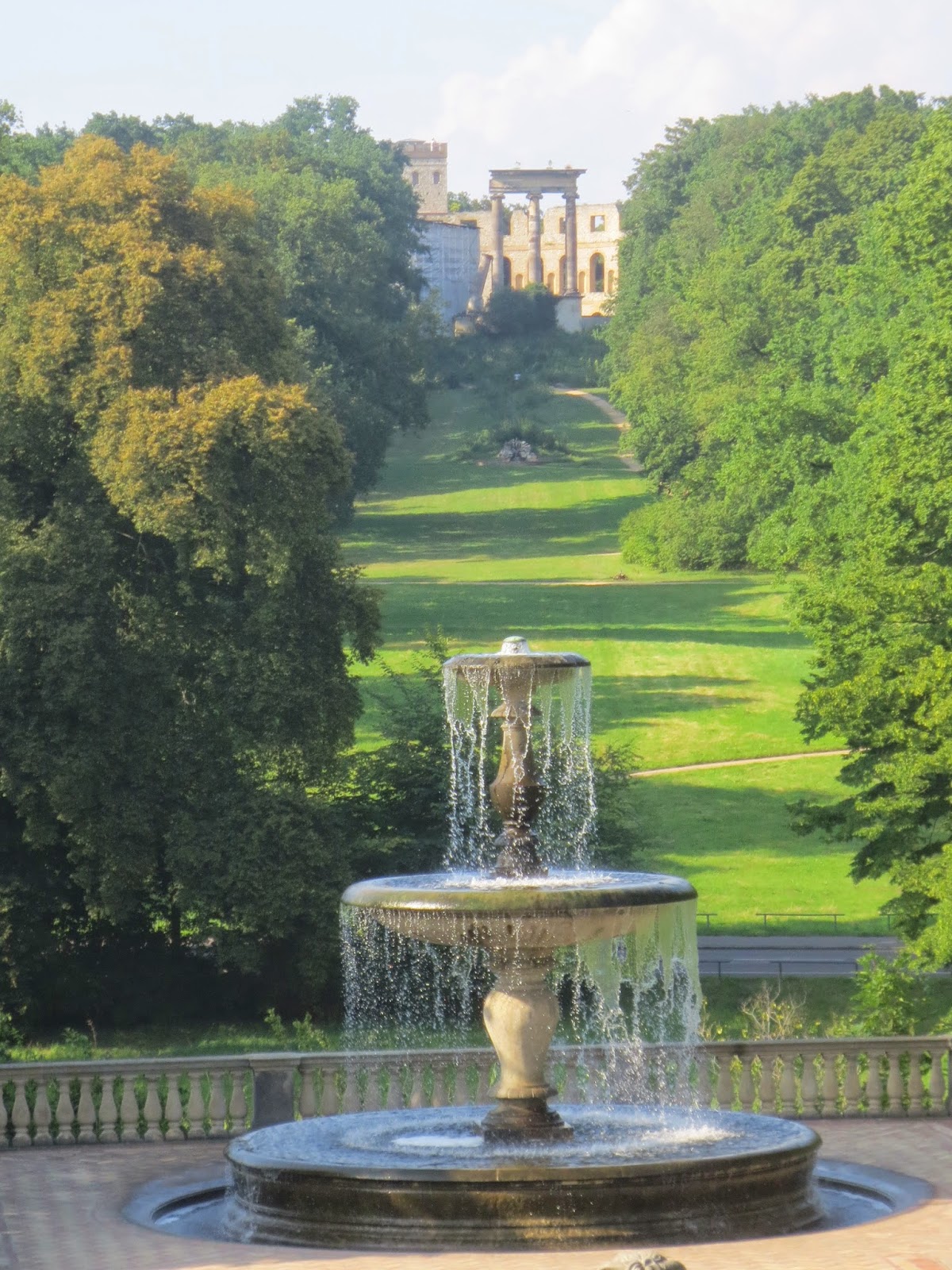 Potsdam is probably best known for hosting the Potsdam Conference, where Harry Truman, Winston Churchill, Clement Attlee, and Joseph Stalin met to determine the fate of Germany following its defeat in the Second World War. However, Potsdam’s earlier fame, and the reason we visited, was because of Sanssouci Palace and Park, the summer home of Frederick the Great.
What to see: 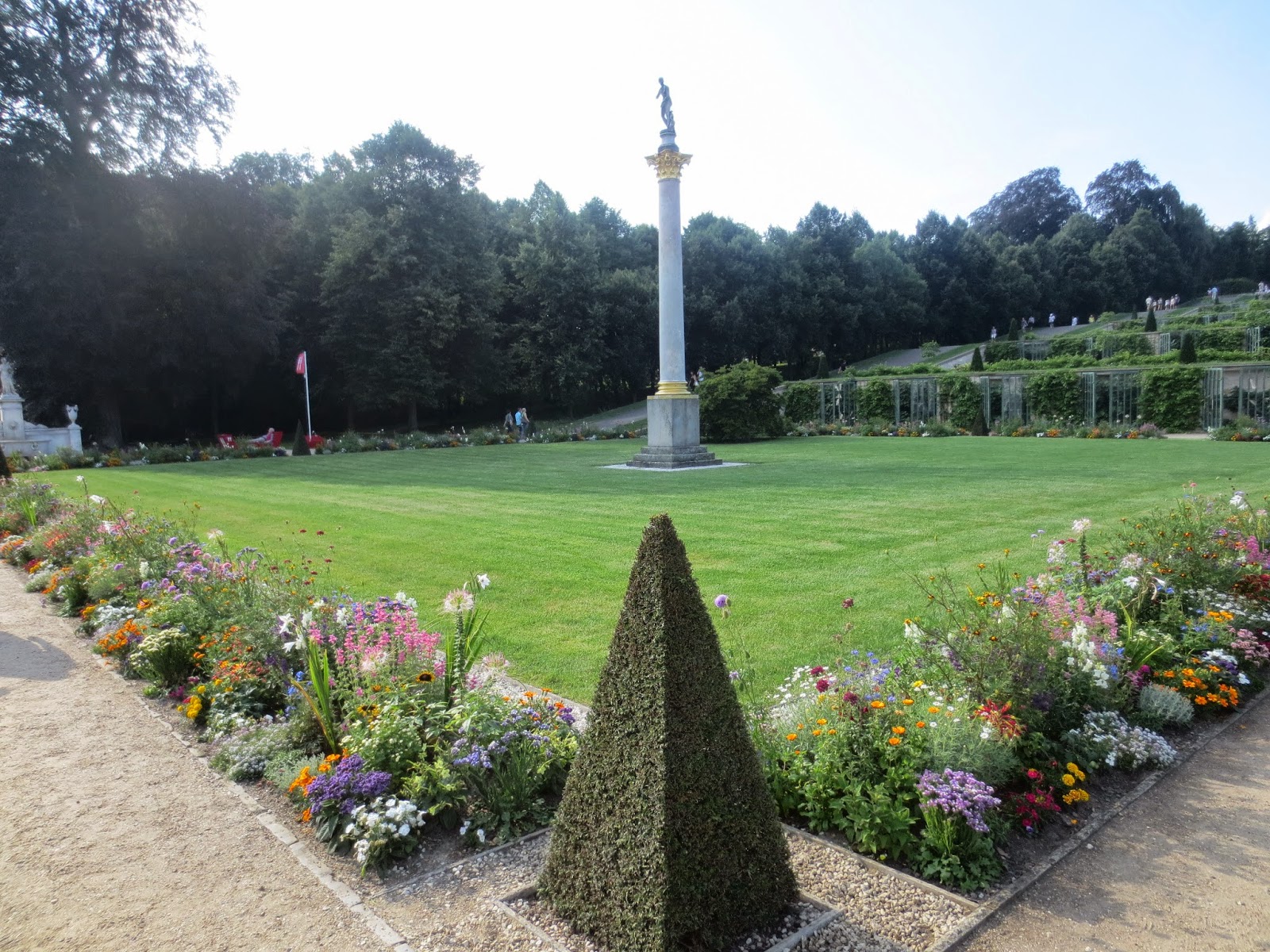 Frederick the Great was King of Prussia from 1740 to 1786. Like many Europeans at the time, he admired everything about France. He spoke French better than German, he often hosted French guests (including one of his favourites, the philosopher Voltaire), and he modeled his summer home, Sanssouci (French for “without care”) after Versailles.
He planted the vineyard first, then began planning the park. Sanssouci eventually became home to flower gardens, fruit trees, greenhouses and long stretches of grass connected by a 1 1/2 mile-long path. It also displays a number of sculptures and fountains, although the fountains were never functional during Frederick’s lifetime.
It was a beautiful day when we visited, and we walked the full length of the avenue, from the obelisk at the eastern entrance to the New Palace at the west, and back. We enjoyed watching the now-functional fountains and the immaculately maintained grounds. 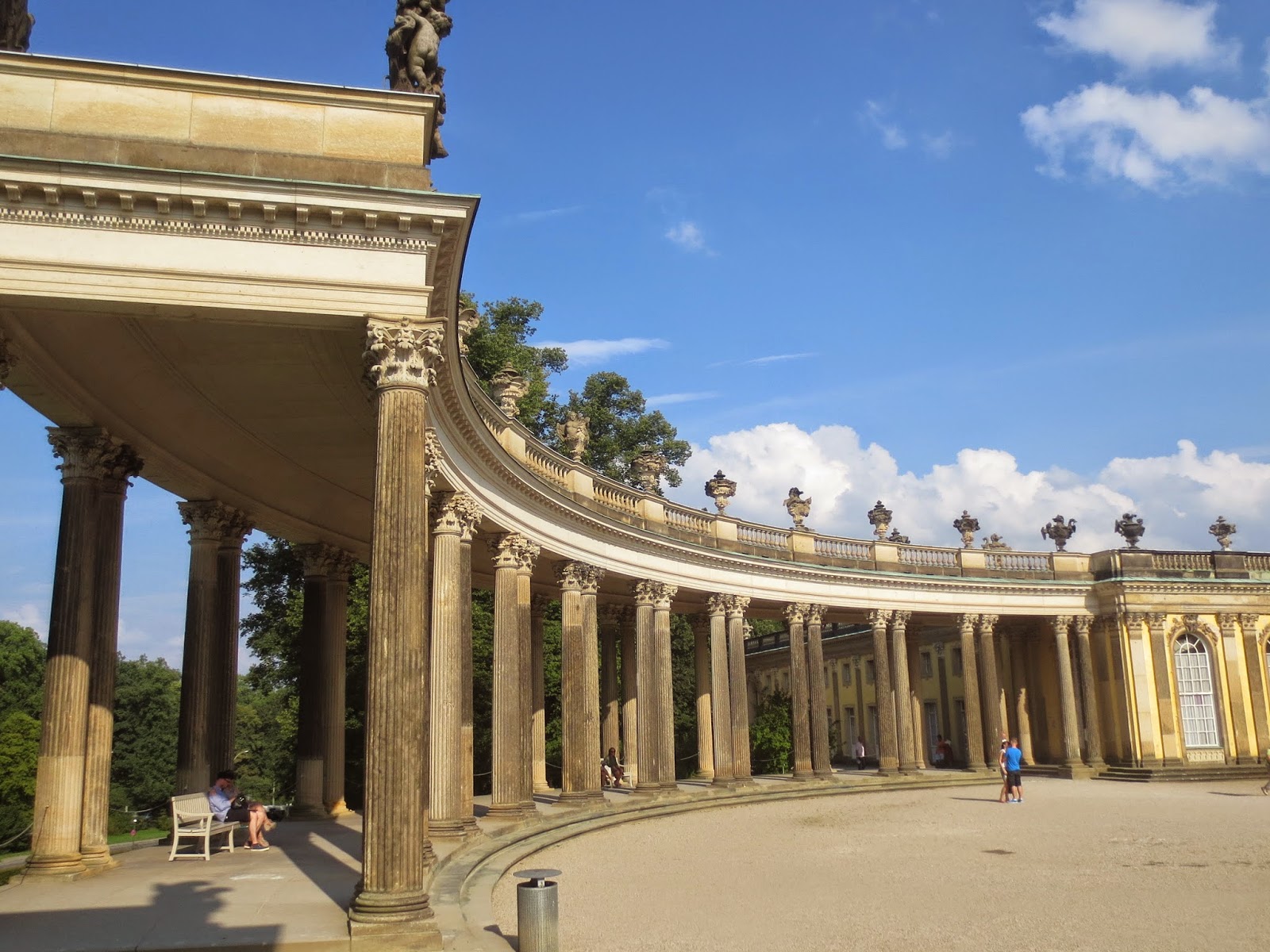 Frederick loved Potsdam and his garden so much that he chose to build a palace in the area of the park with the best sightlines. A terrace leads from the central Lustgarten (translated as Pleasure Garden) to Sanssouci Palace, whose elevated position commands a lovely view of the entire park. Built in rococo style, the palace was very small by royal standards, a mere ten rooms. An artist at heart, Frederick loved to entertain friends like Voltaire and other great thinkers, and they spent many evenings debating philosophy, art and literature well into the night.
For some reason, I only took photos of the ceilings inside the palace. Hence, I present the ceilings of Sanssouci: 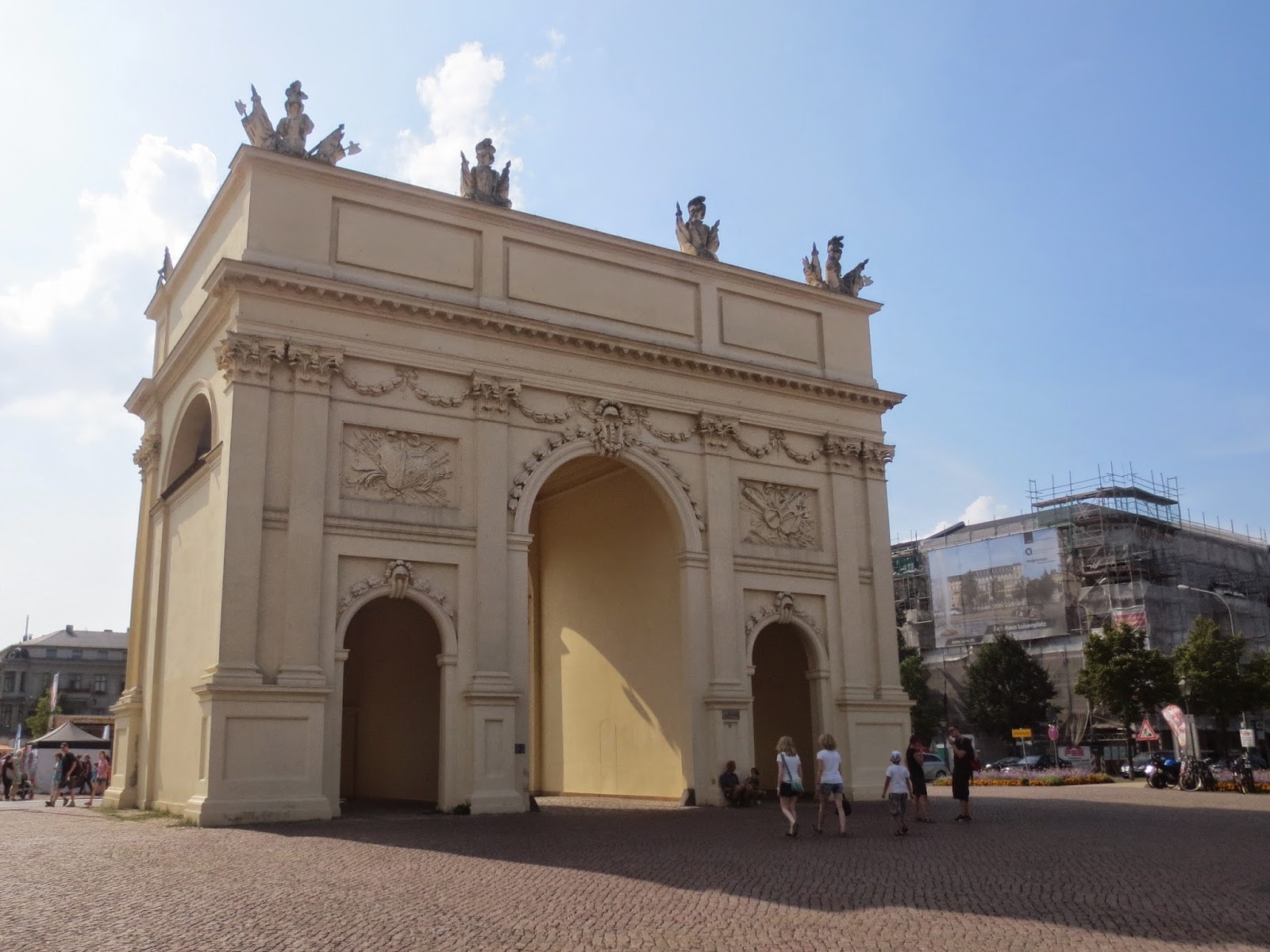 Berlin is famous for the Brandenburg Gate, but Potsdam has a Brandenburg Gate (Brandenburger Tor) of its own. Potsdam’s gate was designed by a different architect on each side, and is entrance to the pedestrian-only Brandenburgerstrasse. The Church of St. Peter and Paul lies a few blocks away, at the other end of the street. 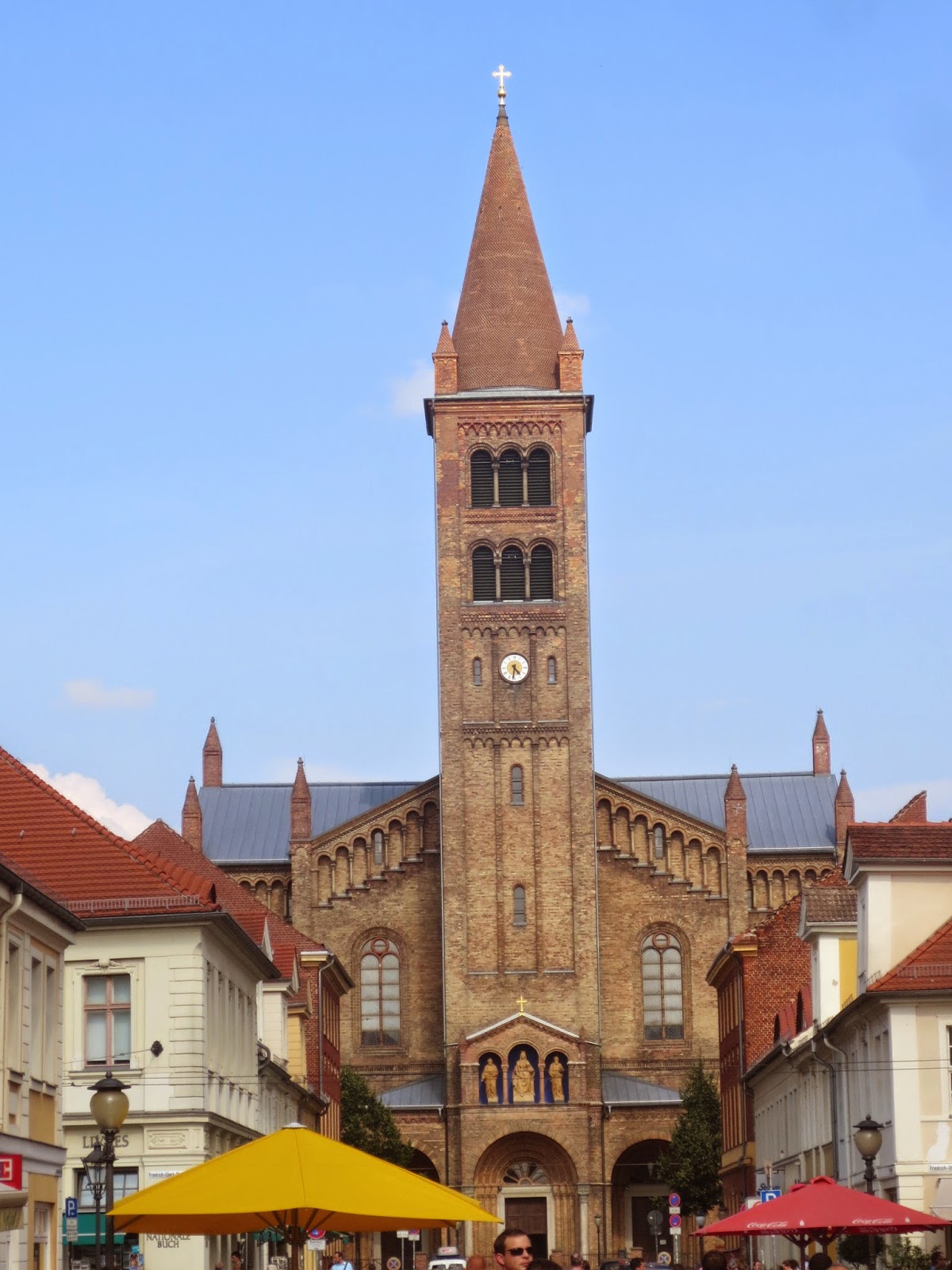 Where to eat:
After a very warm afternoon in the park, we could tell the weather was about to change. Concerned by the dark clouds, we chose a restaurant that was a short walk from our hotel. The food at Adriatic was great, but our most memorable moment had nothing to do with the food.
We decided to eat outside under a sturdy awning, and when the inevitable rain came down, we remained outside, while all the other diners went in. It was kind of romantic, listening to the sound of rain pelting on the awning above our heads while we stayed dry. Romantic, that was, until we heard a whirring sound and saw the awning beginning to retract. Panicked, we began gathering our things to make a run inside – until we looked through the window and saw the bartender, doubled over in laughter, with a remote control in his hand. Having had his joke, he returned the awning to its original location and we enjoyed the rest of our meal in dry clothes.