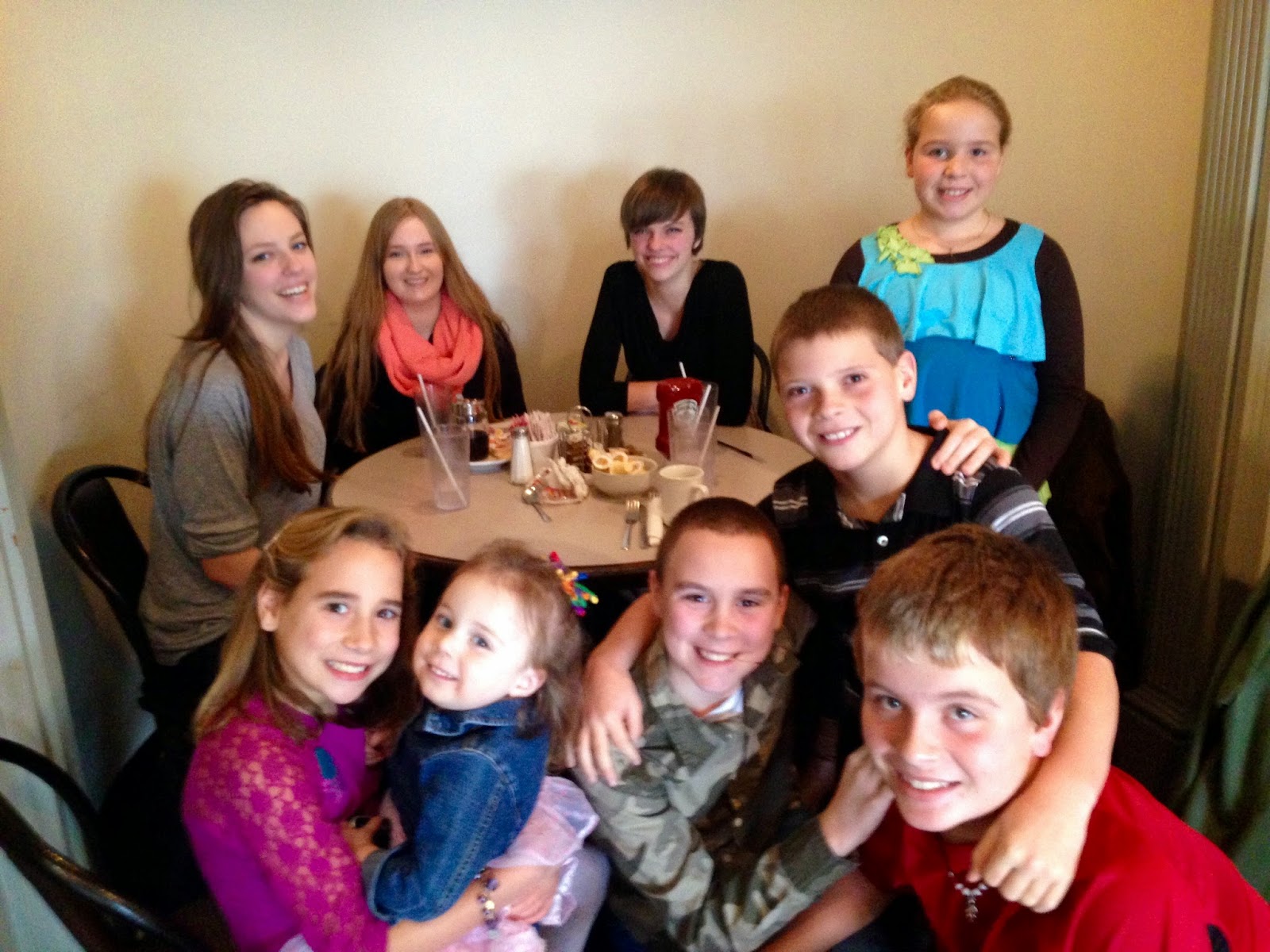 It’s the time of year for family reunions. I’ve written before about getting together with my dad’s side of the family, but we celebrate with the relatives on my mom’s side, too. We met last weekend to have brunch and to catch up on each others’ busy lives.

Many of my cousins now have children of their own. And this year for the first time, one of my cousins has a grandchild. Heather’s daughter Laura had a baby (Alice) a month ago. The family tree has gained another branch.

We were lucky to have most of my daughters’ generation celebrating with us. With the exception of Laura and her brother Ben, all the children of my first cousins were there. They range in age from two to twenty, and although they don’t see each other often, they were enthusiastic in getting reacquainted.

We’ve been meeting at Christmas as a family for longer than I can remember. There are baby pictures of me taken under the Christmas tree at my Grandma and Grandpa Bustin’s house. One of the photos I posted last month was taken at my grandparents’ house at Christmas 1968. Now we meet at a restaurant that’s at a midpoint for most of us. Much has changed but the important things haven’t: family members getting together, breaking bread, and sharing stories.

“The world begins at a kitchen table. No matter what, we must eat to live.

The gifts of earth are brought and prepared, set on the table. So it has been since creation, and it will go on.

We chase chickens or dogs away from it. Babies teethe at the corners. They scrape their knees under it.

It is here that children are given instructions on what it means to be human. We make men at it, we make women….

At this table we sing with joy, with sorrow, We pray of suffering and remorse. We give thanks. Perhaps the world will end at the kitchen table, while we are laughing and crying, eating of the last sweet bite.”

– from “Perhaps the World Ends Here”, by Joy Harjo 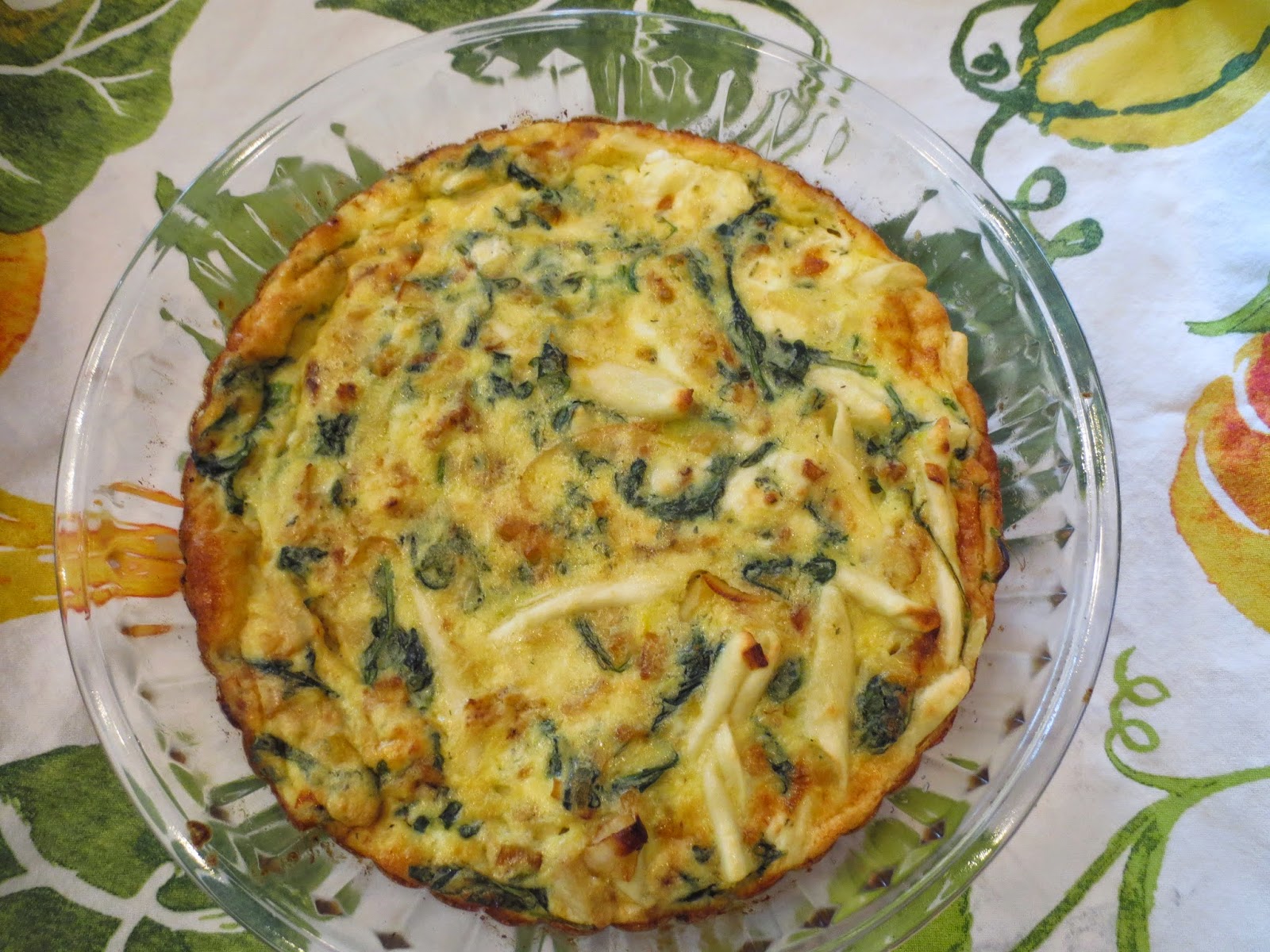 Pasta Frittata with Leeks, Arugula, Goat Cheese and Mint
(from The Fresh & Green Table, by Susie Middleton)
3/4 cup small to medium shaped pasta (I used calabresi but fusilli would also be nice)
kosher salt
freshly ground pepper
2 Tbsp butter (first amount)
1 Tbsp olive oil (first amount)
2 cups thinly sliced leeks (white and light green parts only) from about 3 large leeks, well washed
1 tsp minced garlic
4 ounces baby arugula leaves (about 4 cups packed)
7 large eggs
1/3 cup whole milk
1/3 cup heavy cream
1/3 cup coarsely grated parmigiano-reggiano
4 ounces fresh goat cheese, well crumbled while still chilled
1 Tbsp chopped or thinly sliced fresh mint
1/2 Tbsp butter (second amount)
1 tsp olive oil (second amount)
Preheat oven to 375 degrees.
Cook pasta in well-salted boiling water. Drain and transfer to a medium bowl.
In a 10 inch heavy nonstick ovenproof skillet, heat 2 Tbsp butter and 1 Tbsp olive oil over medium-low heat. When the butter has melted, add the leeks and 1/4 tsp salt, cover and cook, stirring occasionally, until the leeks are softened and translucent, about 5 minutes. Uncover, raise the heat to medium, and continue to cook, stirring frequently, until the leeks have shrunk and browned, another 8 to 10 minutes. Add garlic and stir until softened and fragrant, about 30 seconds. Add arugula to the pan and toss with the leeks until the arugula has completely wilted, about 2 minutes. Transfer the leeks and arugula to the bowl of pasta and toss well. Let cool for 10 minutes.
In a large bowl, whisk the eggs, milk, cream, 1/2 tsp salt, and several grinds of pepper. Stir in the parmigiano, goat, cheese, and mint. Add the pasta mixture and stir well to incorporate all the ingredients.
Return the skillet to medium-high heat and add the remaining 1/2 Tbsp butter and 1 tsp olive oil. When the butter has melted and begun to sizzle, pour and scrape all the pasta-custard mixture into the skillet. Gently stir once or twice to move the contents of the pan so everything is evenly distributed. Let the pan sit on the heat until the custard is just beginning to set all the way around the edge of the pan, 1 to 2 minutes. Transfer the pan to the preheated oven and bake until the frittata is set, about 25 minutes.
Let the frittata cool at least 15 to 20 minutes before serving. The flavour gets better as it sits, so it can be served at room temperature, or even the following day.