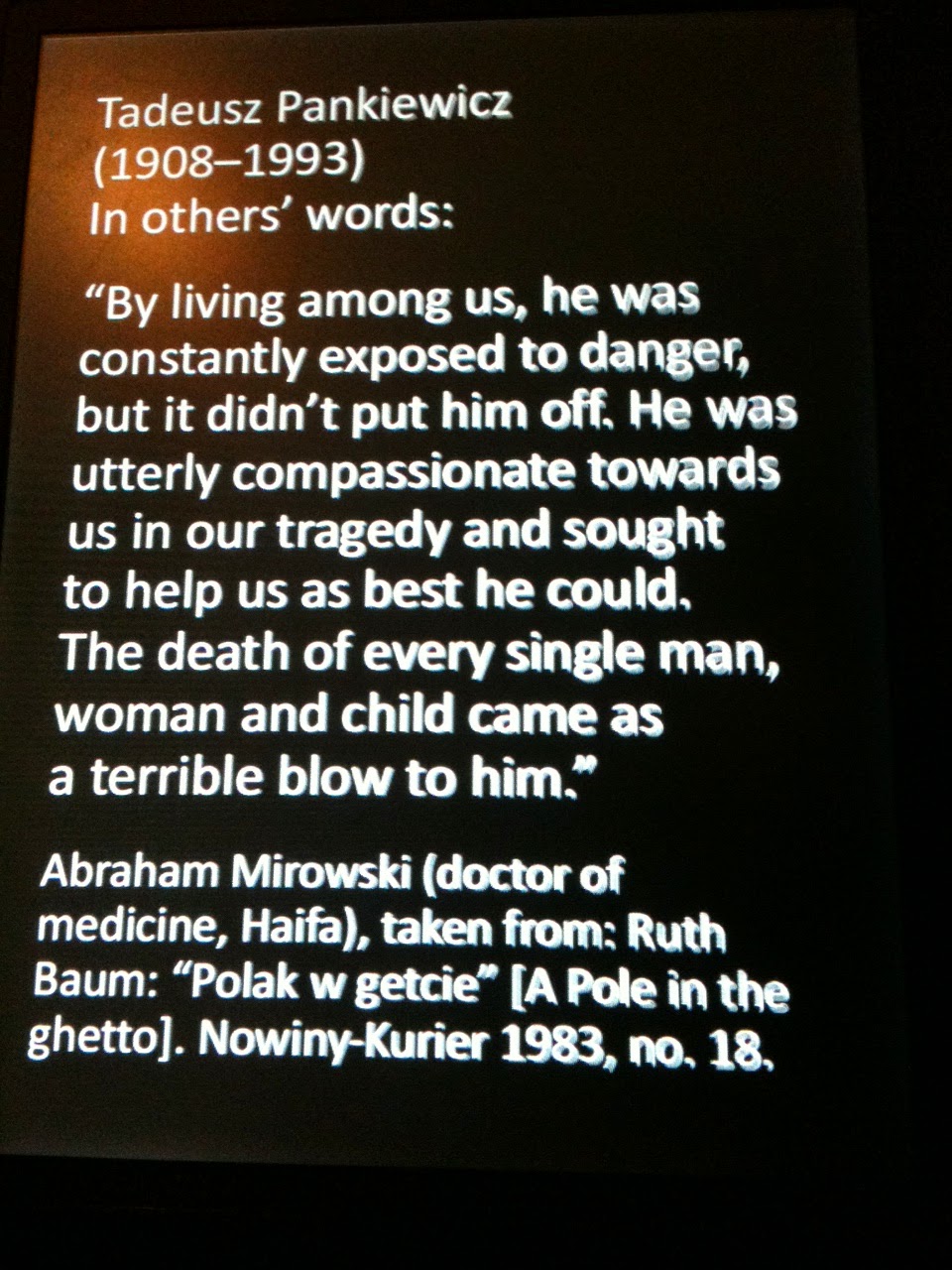 I wrote last week about visiting Schindler’s Factory in Krakow, Poland. This week, I’ll describe my visit to two areas of the city: Podgorze, the Jewish Ghetto during the Nazi occupation; and Kazimierz, the traditional Jewish district. 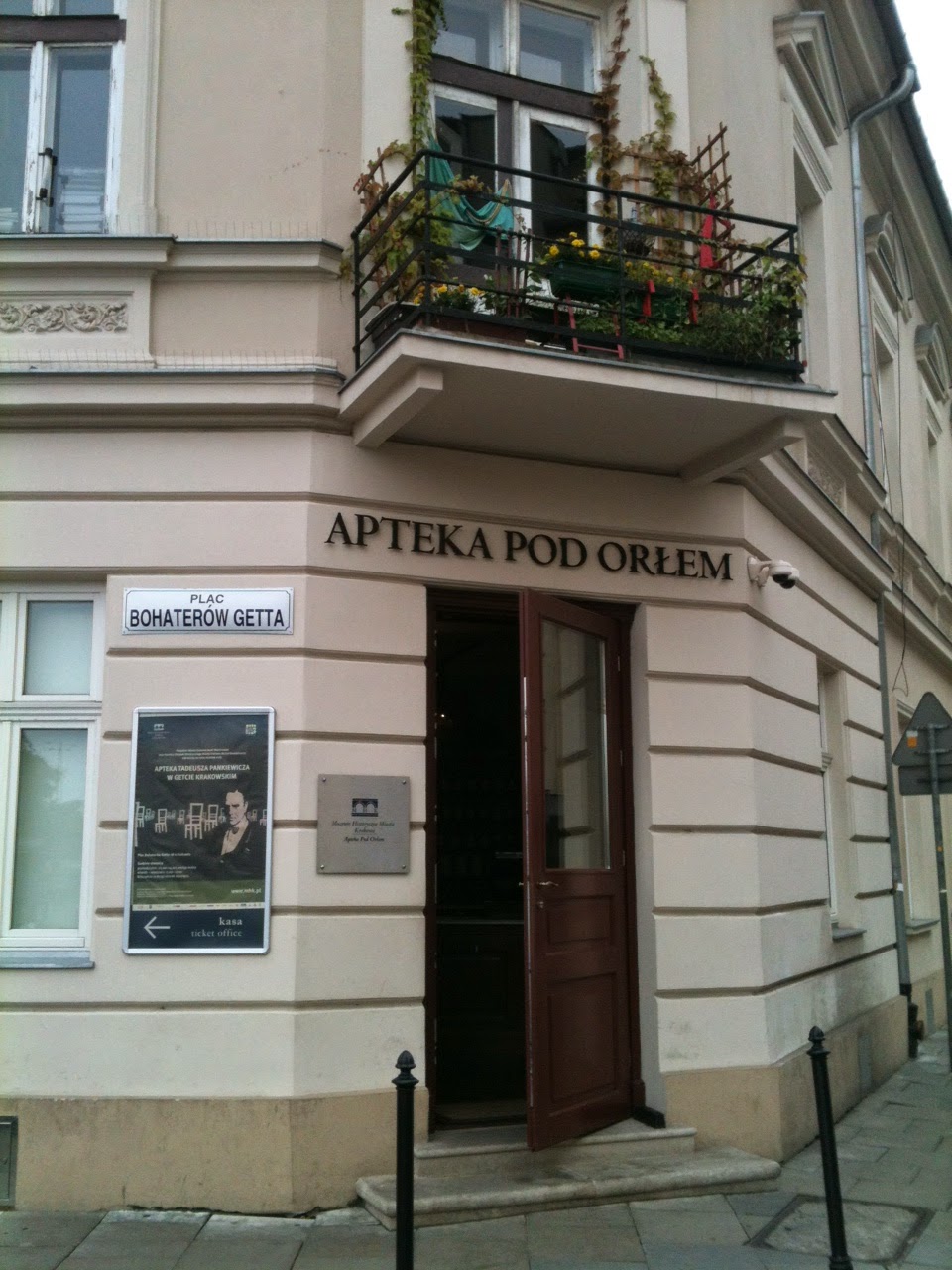 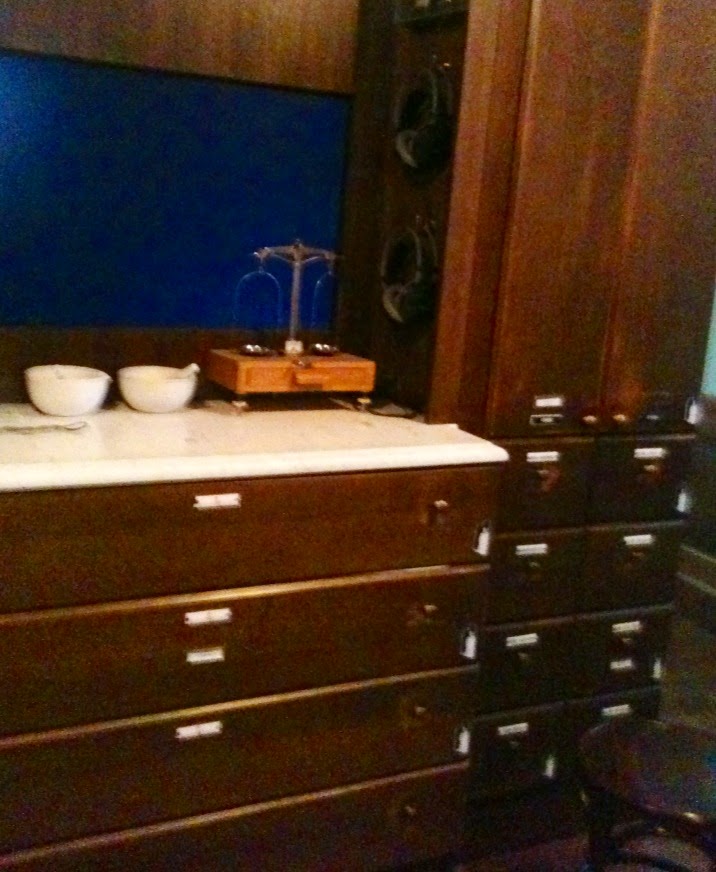 After the Nazis invaded in 1939, 20,000 Jewish people were rounded up and forced into 320 buildings in Podgorze with only a day’s notice. Most of the non-Jewish businesses left the area, but Tadeusz Pankiewicz elected to keep his Eagle Pharmacy running. Pankiewicz was the only non-Jewish person living in the district, and he made it his mission to give comfort to those who suffered. His pharmacy was used as a secret meeting place for the underground movement. He gave residents medications that were expensive and hard to come by, and he and his employees smuggled in food and supplies for those in need. He even provided tranquilizers to keep young children quiet during raids by the secret police.

The pharmacy has been restored to its original condition and converted into a museum. Each of the cupboards and drawers in this tiny, five-room museum contains information on living in the Jewish Ghetto. Especially moving were the photos of children and adults who lived in the area; the backs of the photos included their names and a brief story of their lives, including whether or not they survived. 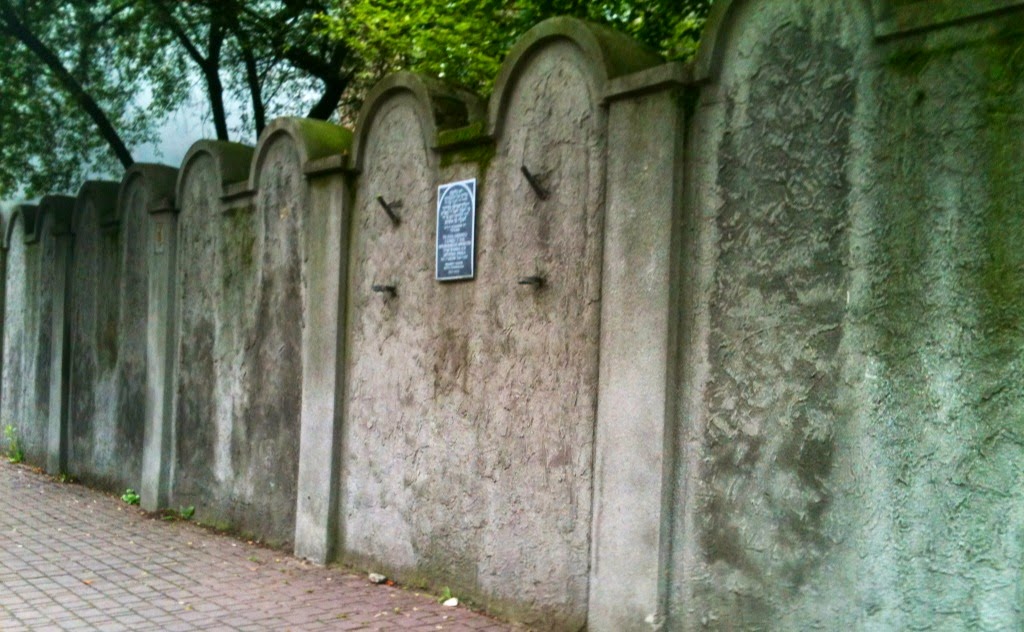 During the occupation, a wall enclosed the entire Jewish Ghetto, keeping residents inside and others on the outside. Most of the wall has been torn down, but a few sections remain, one of which is shown in the photo above. The plaque below commemorates that portion of the wall. At the beginning of World War Two, 60,000 Jewish people lived in Krakow; only 2,000 survived the war.
From Podgorze, I walked back across the bridge into Kazimierz. This area was originally founded in 1335, and before WWII was home to the largest Jewish population in Krakow. Although many of the beautiful synagogues and other buildings were destroyed beyond repair, a few survived the war and have since been restored. 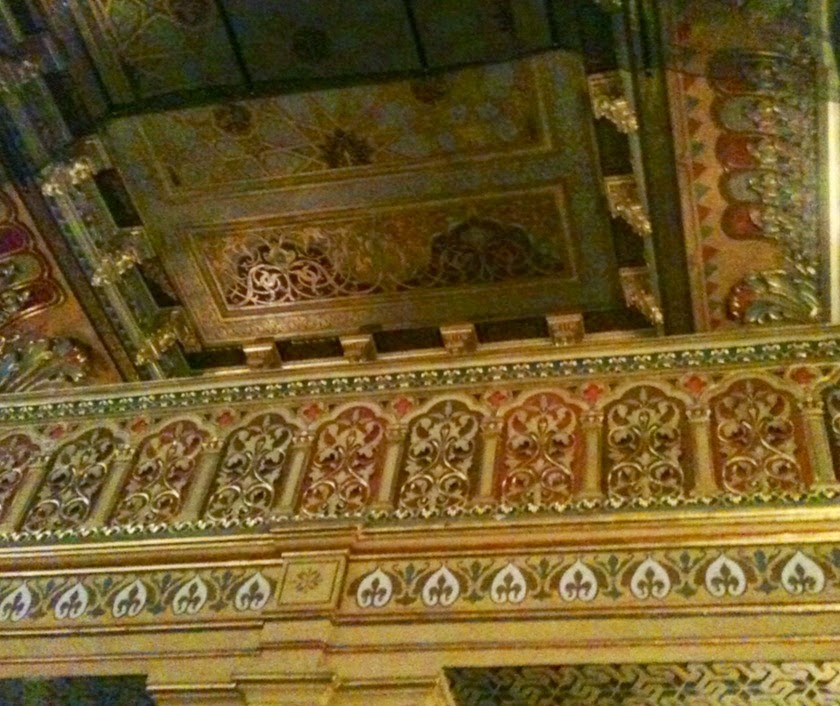 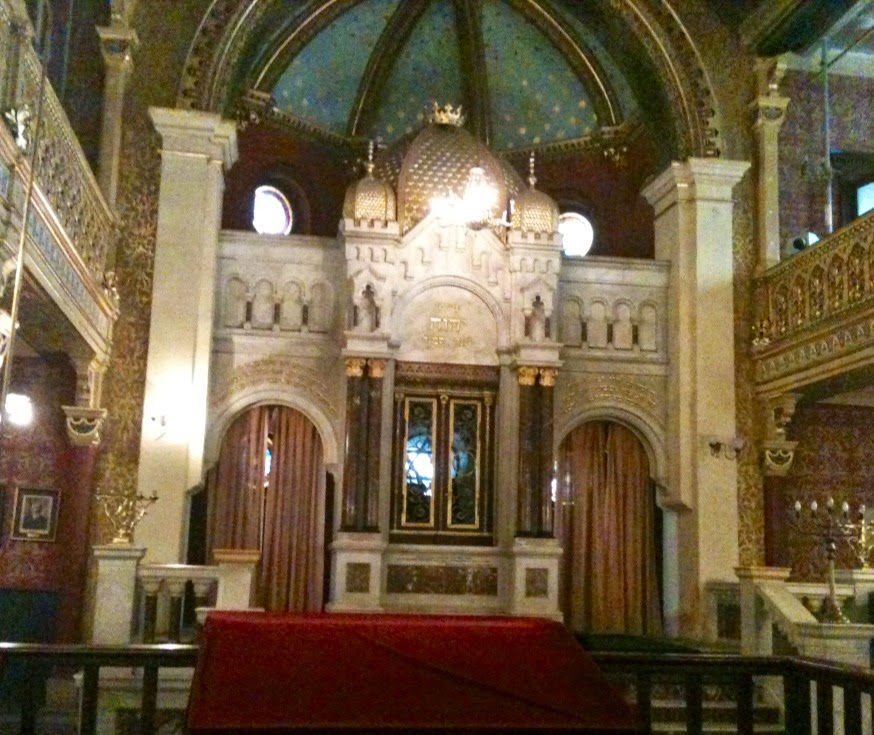 Tempel synagogue, built in 1862, was badly damaged in the war due to its use as a stable. After the war, when the country was under Soviet regime, there was no money to restore it, and the building continued to deteriorate. Fortunately, it was restored by the World Monuments Fund. Now it’s hard to imagine how degraded it was: the ceiling and balcony fronts are beautifully detailed, and the synagogue is lined with lovely stained glass windows along both sides. 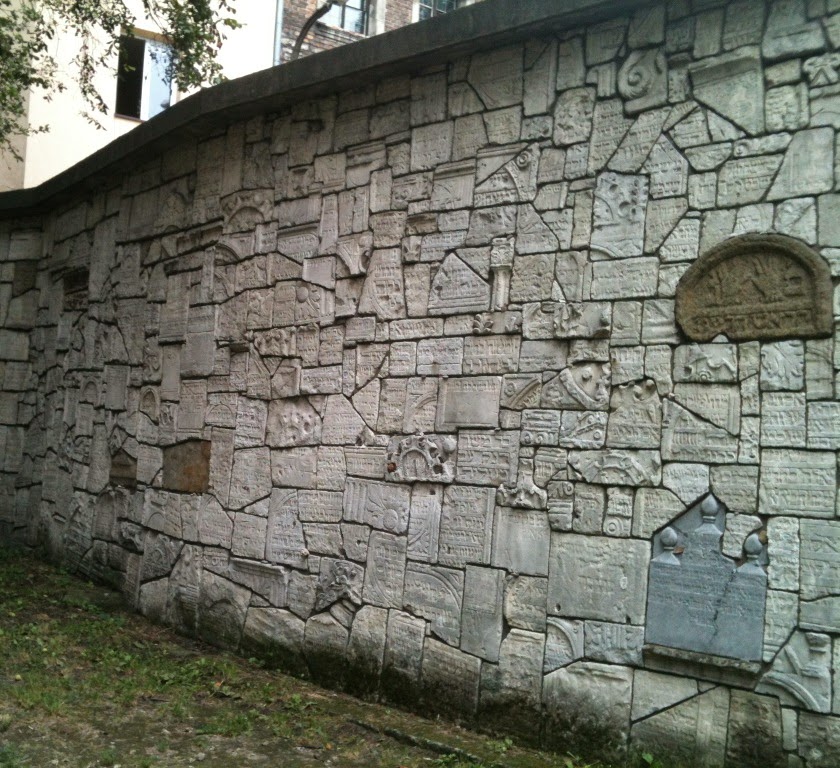 My final stop on the walk was at Remuh Synagogue. Originally built in the sixteenth century, Remuh is the only Krakow synagogue still used regularly in worship. Many of the gravestones in its cemetery were destroyed during the Occupation. Some were reconstructed, but in many cases the pieces were too small to reconstruct. Those fragments were lined around the interior of the cemetery wall, and became Remuh’s Wailing Wall. 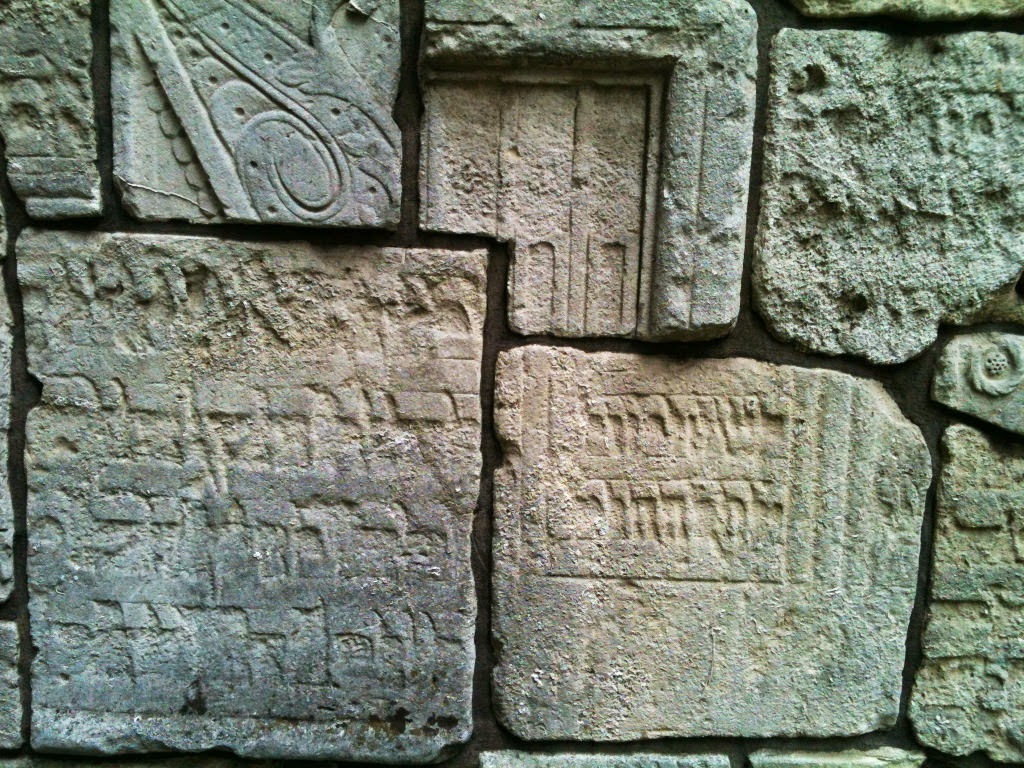