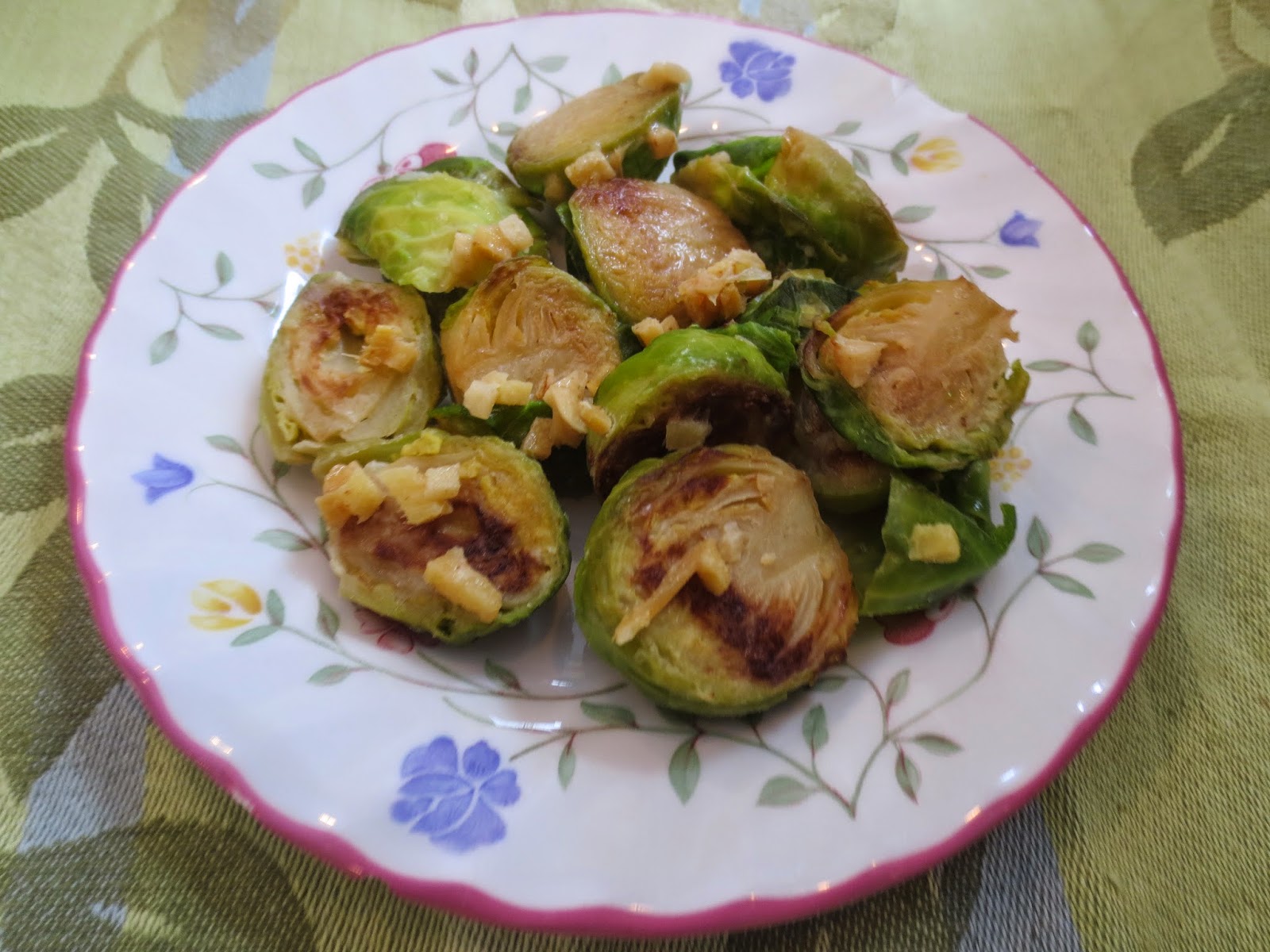 Here’s a sentence I never thought I’d say: “I should make this Brussels sprouts recipe – I’ve got all the ingredients I need in my fridge.”
In my old life, I thought I hated Brussels sprouts. I didn’t grow up eating them, and had never even tried them until I started to date Andrew. His mother was a wonderful cook: she had a way with shepherd’s pie and Christmas trifle that only someone born and raised in Great Britain could have. But she had an inexplicable weakness for Brussels sprouts.  I was dubious from the moment I smelled them boiling, wasn’t reassured when I saw the gray-green lumps on my plate, and definitely didn’t relish the overpowering flavour. I compensated by eating them first so I could mask their taste with everything else on my plate. In retrospect, I realize she may have thought I ate them first because I liked them.
But that’s in the past. My recent sprouts awakening meant that I bought more last week, looking for an excuse to make them again. So when I came across this recipe – and had all the ingredients on hand – I knew I had to try it. Guess what? I like this recipe even better than the one that precipitated my conversion.
I can’t over-emphasize how easy and how delicious these sprouts are. And in case you’re wondering, I have a bag of Brussels sprouts sitting in my fridge right now. I know what I’m making for dinner. 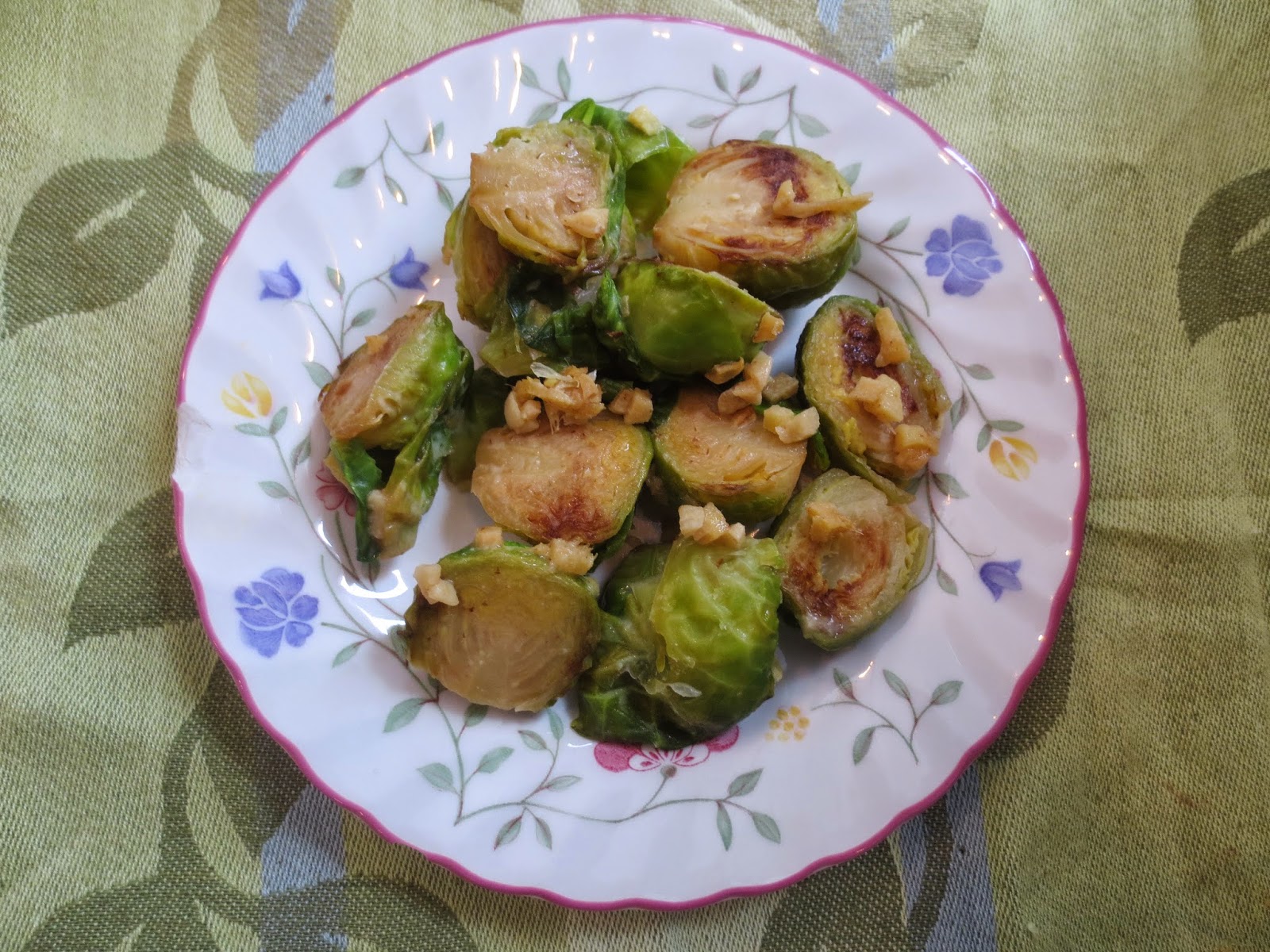 Gingery Braised Brussels Sprouts
(from Fast,Fresh and Green, by Susie Middleton)
1 1/2 Tbsp unsalted butter (first amount)
1 Tbsp extra-virgin olive oil
12 to 13 ounces (340 to 370 grams) Brussels sprouts, trimmed and halved
3/4 tsp kosher salt
1/2 cup low-sodium chicken broth
1 Tbsp unsalted butter (second amount)
1 Tbsp minced fresh ginger
1 tsp minced fresh garlic
1/2 small lime
In a 10” sauté pan, melt 1 1/2 Tbsp butter with olive oil over medium heat. Arrange Brussels sprouts, cut side down, in one layer in the pan. (You’ll have to tuck them in snugly.) Season with the salt. Cook the sprouts until bottoms are nicely browned, 5 to 6 minutes. Pour the broth into the pan and cover, leaving the lid slightly askew so that some steam escapes. Turn the heat down if necessary so the broth is just gently simmering.
Cook until the broth is reduced to about 2 Tbsp, 7 to 9 minutes. Remove lid and add 1 Tbsp butter, ginger, and garlic. Toss well and stir just until the butter has melted. Remove the pan from the heat and continue to stir gently until the ginger and garlic are well incorporated and slightly softened. Gently squeeze the lime half over all, toss, and serve.