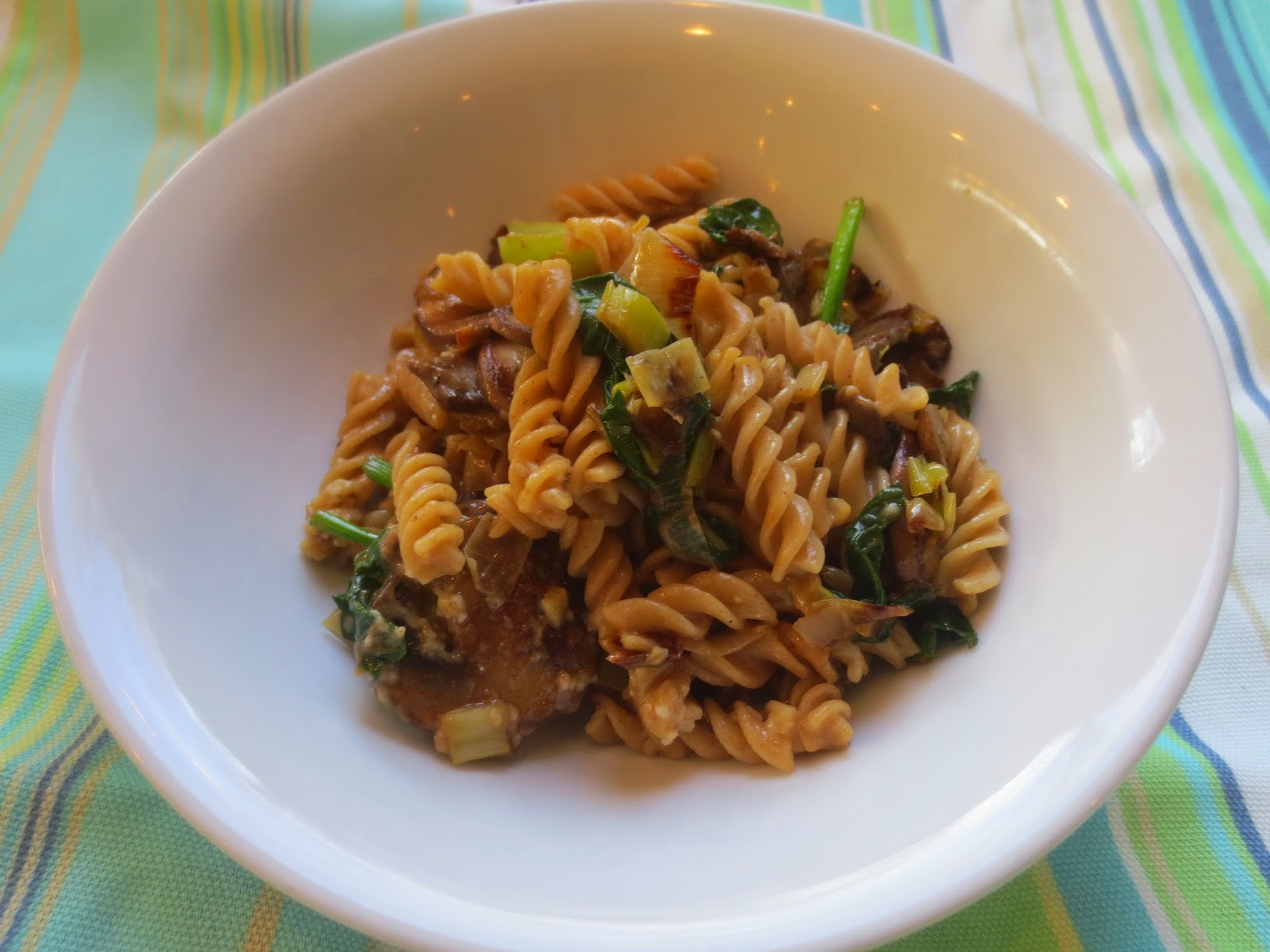 “April is the cruellest month, breeding
Lilacs out of the dead land, mixing
Memory and desire, stirring
Dull roots with spring rain.”

“In April one seldom feels cheerful;
Dry stones, sun and dust make me fearful;
Clairvoyantes distress me,
Commuters depress me —
Met Stetson and gave him an earful.”

– from “The Waste Land: Five Limericks” by Wendy Cope 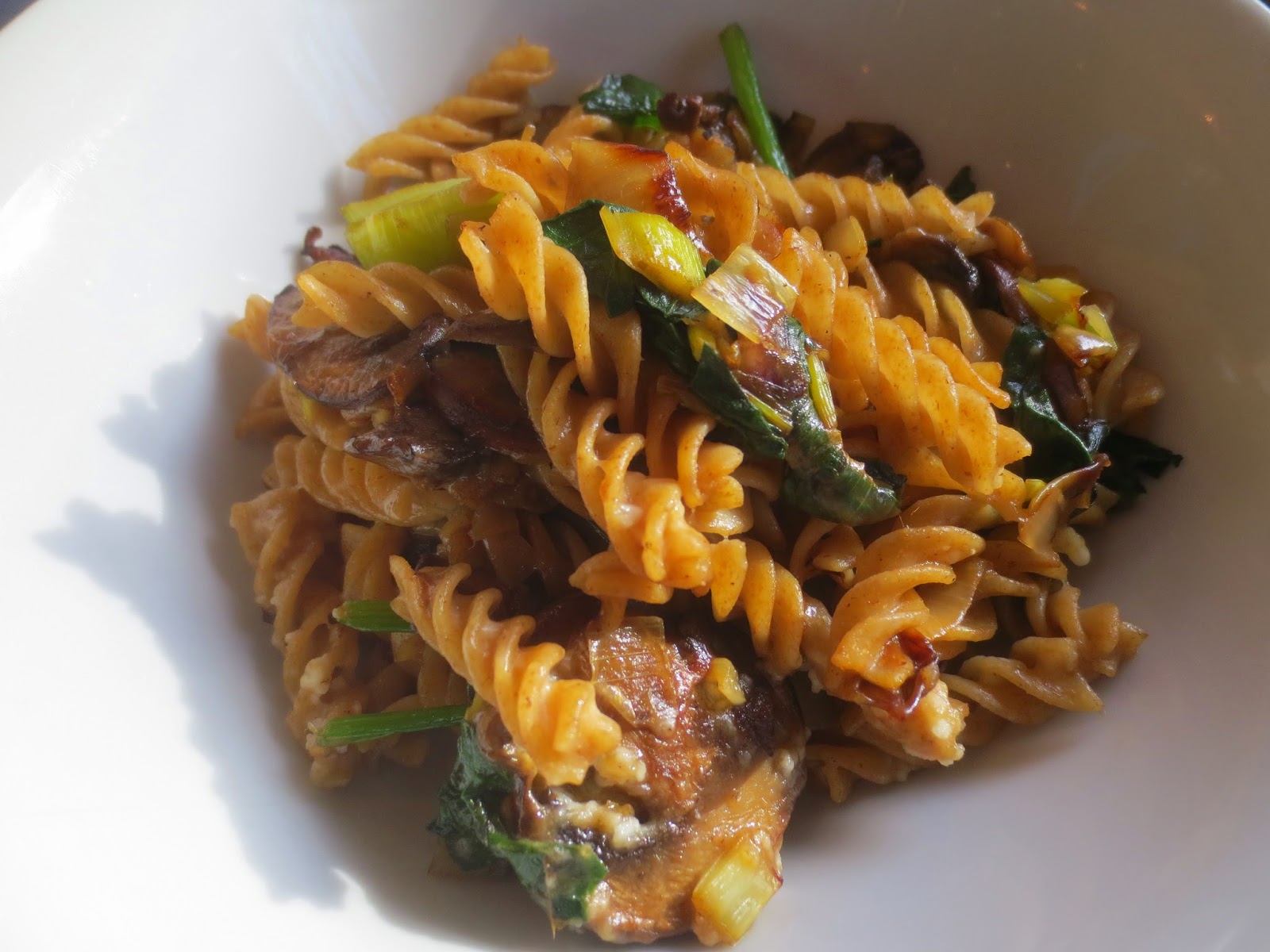 Contrary to Eliot’s dire prediction, today is the loveliest April day you could imagine. I don’t know whether the rest of the month will be cruel or cheerful, dull or depressing: spring is a notoriously fickle season, and we’ll probably get a bit of all those things.

Regardless of the weather, I do know that the leeks that make this fusilli so wonderful are at their best right now. You’ve probably noticed that I post more recipes by Susie Middleton than anyone else. It’s because every recipe I’ve ever tried of hers is loaded with vegetables, and over-the-top delicious. She uses the freshest of each season’s ingredients – in this case, leeks – and adds the flavours that will keep you coming back for more.

Now I’m off to enjoy this beautiful April day – dry stones, sun, dust and all.

Fusilli with Leeks, Baby Spinach and Mushrooms
(from Fresh & Green Table, by Susie Middleton)
Ingredients:
2 Tbsp freshly-squeezed orange juice
2 Tbsp heavy cream
kosher salt
2 Tbsp unsalted butter (first amount)
1 Tbsp olive oil
2 cups thickly-sliced leeks (white and light green parts only), from 3 – 4 large leeks
8 ounces (225 grams) cremini mushrooms, thickly sliced
1 1/2 cups dried fusilli, or other small corkscrew pasta
1 Tbsp butter (second amount)
2 tsp minced garlic
1 tsp minced peeled fresh ginger
5 ounces (140 grams) baby spinach leaves
kosher salt and freshly ground pepper
1/2 cup grated parmigiano reggiano
Directions:
Combine the orange juice and cream. Set aside.
Bring a large pot of salted water to a boil. Put a colander in the sink and place a measuring cup next to it.
Meanwhile, in a large nonstick stir-fry pan, heat 2 Tbsp butter and the olive oil over medium-high heat. When the butter has melted, add the leeks, mushrooms, and 1 tsp salt. Cook, stirring occasionally at first and more frequently when browning begins, until the leeks are very soft and the mushrooms are browned, about 16 minutes.
Add the fusilli to the boiling water and cook until al dente. Take the pasta pot off the heat and before draining the pasta, pour 1/3 cup of the pasta water into the measuring cup. Drain the pasta and let sit, loosely covered. Add the pasta water to the orange-cream mixture and stir well.
Reduce the heat under the stir-fry pan to medium and add the remaining 1 Tbsp butter, garlic, and ginger. Stir until fragrant, about 30 seconds. Add spinach and cook, stirring, until the spinach is wilted, 1 to 2 minutes. Add orange juice mixture and bring to a simmer (this will only take a few seconds). Remove pan from the heat.
Add drained pasta to the pan and season to taste. Add parmigiano and stir until well-combined.