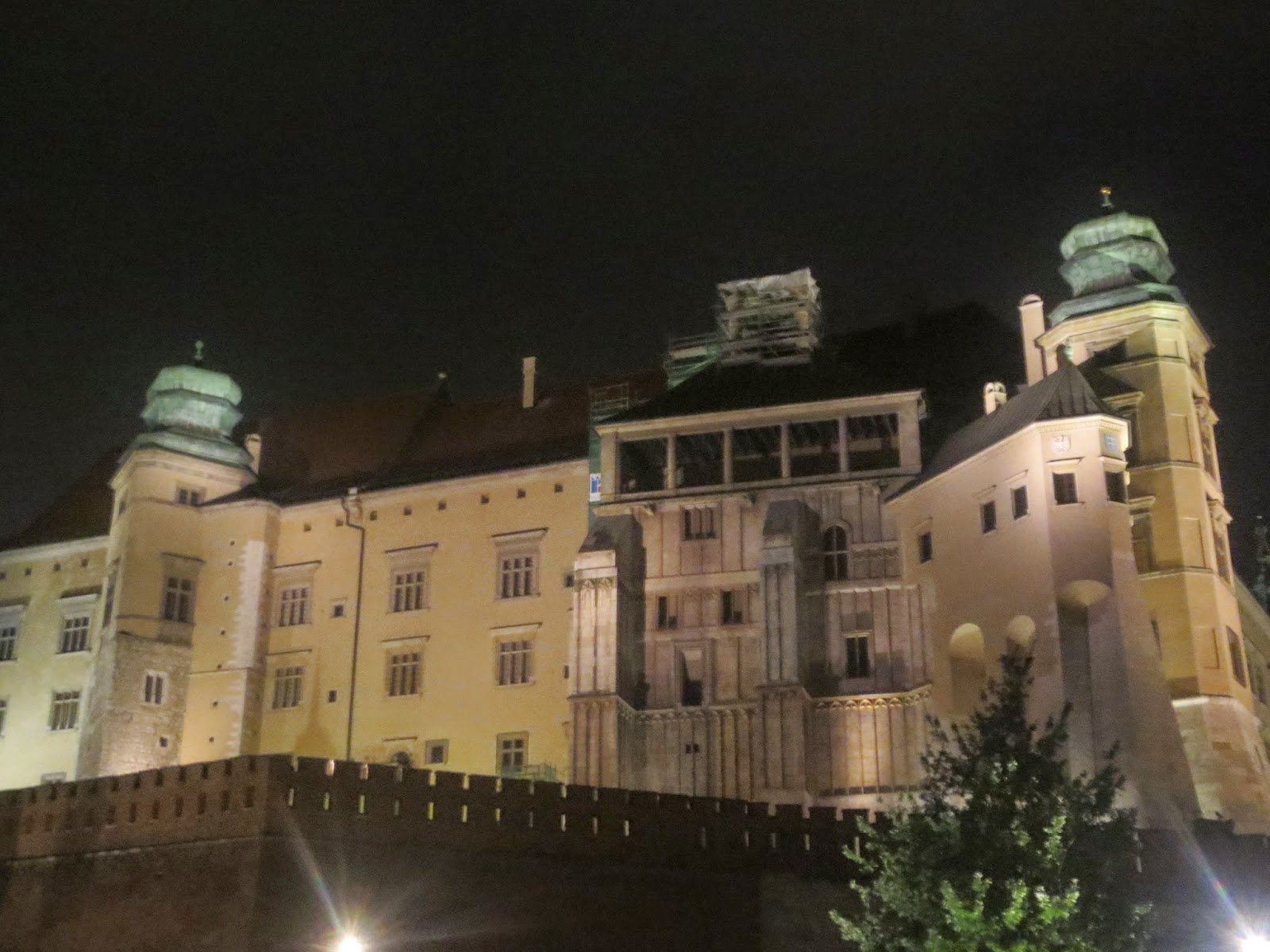 Wawel Hill is home to a castle, a cathedral, and (according to legend) a ferocious dragon who terrorized the city before a brave young shoemaker saved the day.
A royal castle was first built on Wawel Hill in 1038, when King Casimir the Restorer moved the capital of Poland to Krakow. Over the centuries the castle was rebuilt and enlarged, but when it was destroyed in a fire, King Zygmunt began construction on a new castle and courtyard that still stand today.
When the capital moved to Warsaw in 1596, Wawel lost some of its importance, but was still used for ceremonial purposes. In the years that followed, the castle was sacked by one army after another. It was looted: by the Swedes in the Swedish Invasions of the seventeenth and eighteenth centuries; by the Prussians and Austrians following the Poland Partitions; by the Germans in the Second World War. 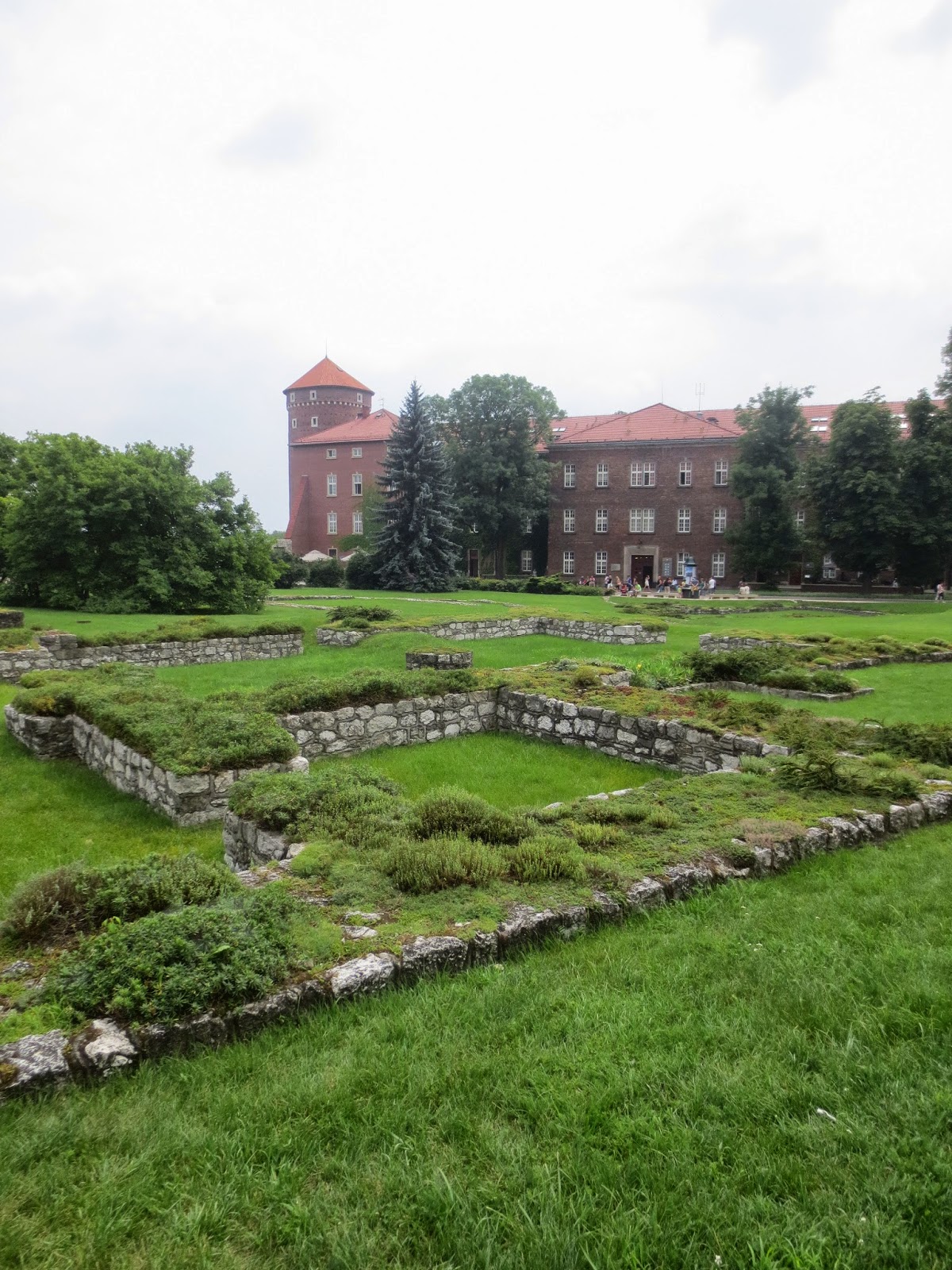 Restorations to the castle began after the war, and the treasures that were shipped out of the country prior to the German invasion were returned. 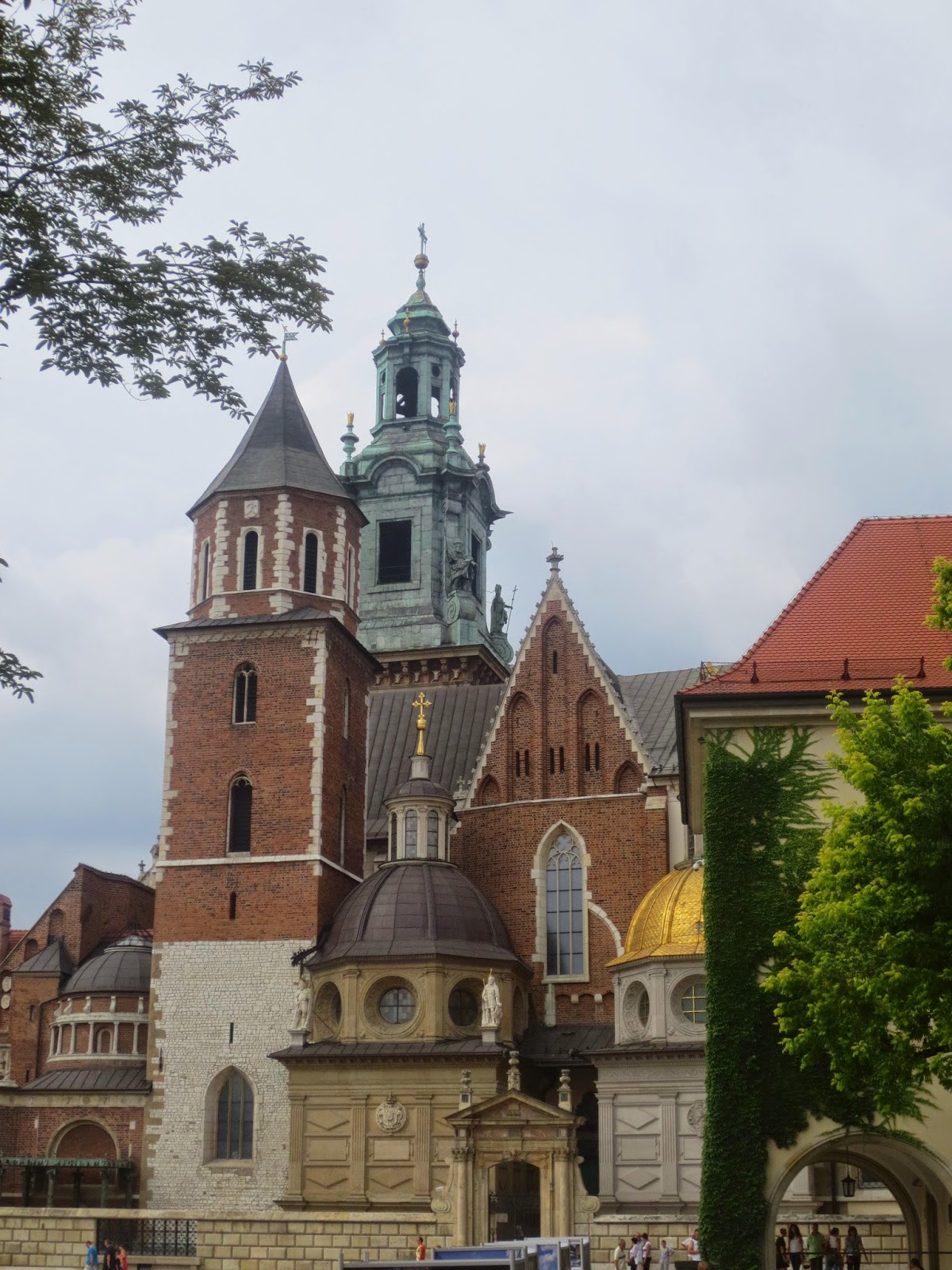 Christians have worshipped at the site of Wawel Cathedral for over 900 years; the current cathedral was built in the fourteenth century. Karol Wojtyla, who later became Pope John Paul II, was ordained here in 1946. In addition to its stately exterior and beautiful interiors, it hosts St. Leonard’s Crypt, burial site for Polish kings since the fourteenth century, and other Polish luminaries. Although the famous Polish composer, Frederic Chopin, is not buried here (his remains reside at Paris’s Pere Lachaise cemetery), a memorial was built in his honour. 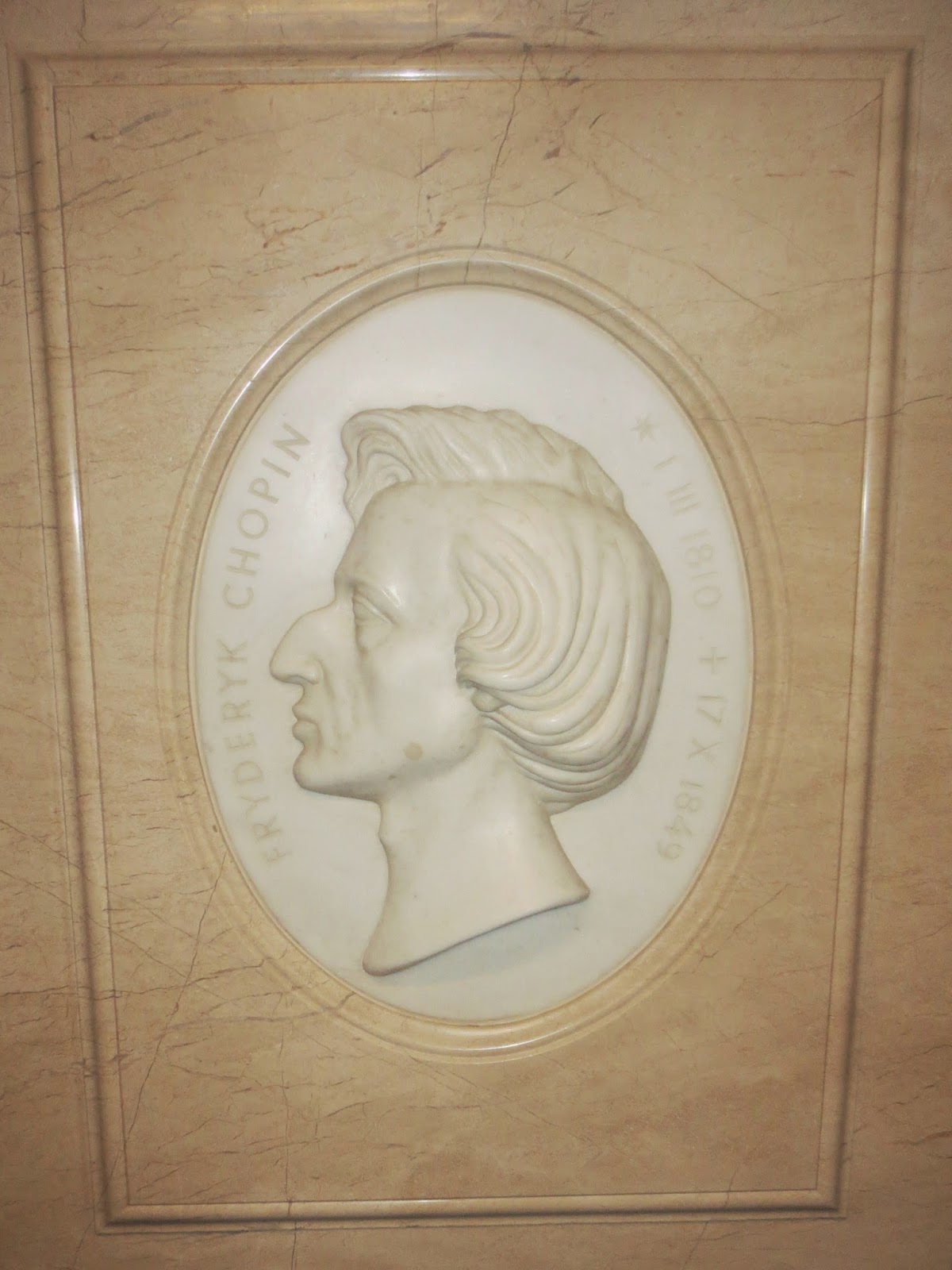 We left Wawel Hill by a steep set of stairs, to visit the Wawel Dragon sculpture. (Although we didn’t catch it on our camera, the dragon actually breathes “fire”.) 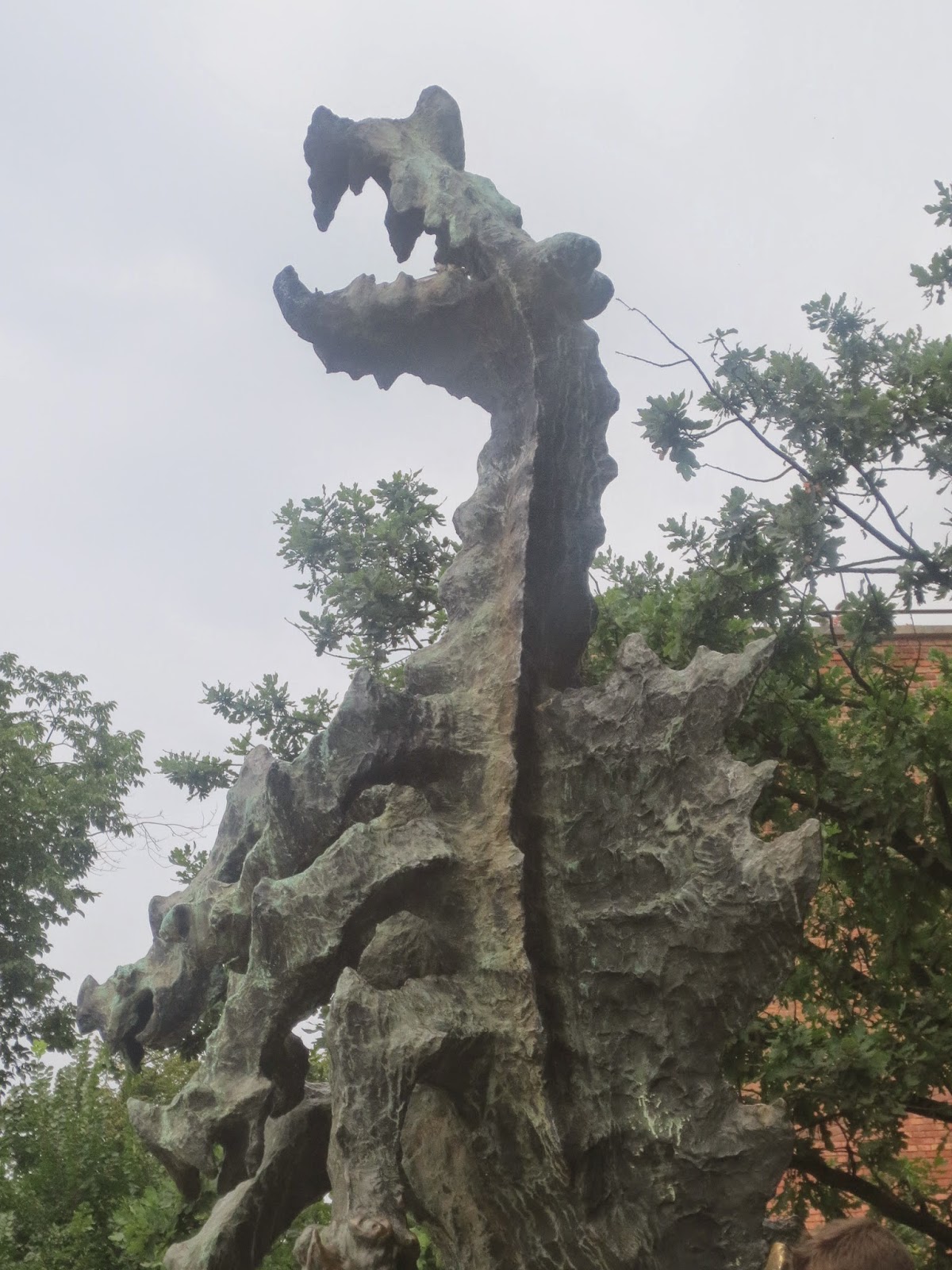 According to legend, in the twelfth century Krakow was demonized by a terrifying dragon that destroyed property and killed residents. The king offered his daughter in marriage to anyone who could kill the dragon or drive him from the city. Many knights attempted, but every one of them failed in his quest.
One day a young shoemaker approached the king and promised to rid the city of this fire-breathing menace. Since Krakow was falling into ruin, the king decided he had nothing to lose, and encouraged the young man to do his best. The shoemaker took a lambskin, stuffed it with sulpher, and stitched it up with his tools so it resembled a live sheep. When the dragon next emerged from his lair, he pounced on the lambskin, ate it in one gulp, and then exploded from the sulpher. The young shoemaker married the king’s daughter and – presumably – they lived happily ever after.