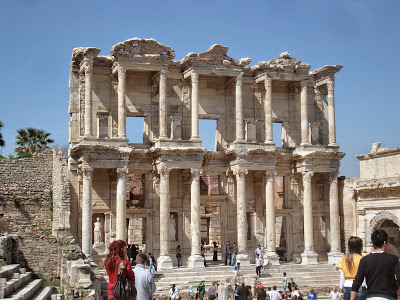 Ephesus was one of the great cities of the ancient world. A Greek city located in what is now Turkey, Ephesus lies mostly in ruins. Over the past 2000 years the port has silted up and the city has lost its importance as a place of culture and knowledge. But a visit to the ruins is evocative of what it must have looked like at its most influential.

Ephesus was one of the key centres of Christianity in the ancient world, and the city is referred to numerous times in the Bible. Paul’s journeys there are detailed in the book of Acts. Later, the Letter to the Ephesians was written by Paul to encourage and support its Christian community.

Although there is some dispute about the population at its peak (estimates run from 35,000 to 225,000), it was unquestionably one of the largest cities in the Roman Empire. At various times it was under Greek, Persian, Roman, Byzantine and Turkish control. 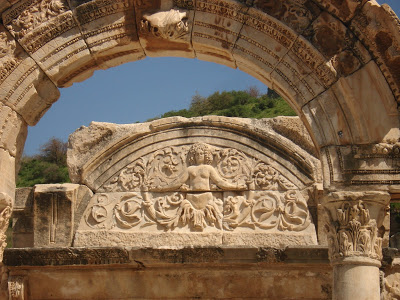 The Temple of Hadrian is one of the best-preserved buildings. Erected in honour of the Emperor Hadrian, it exhibits a stone carving of Tyche, the goddess of luck or fortune, at the top of the marble arch. Directly behind, the face and body of a woman (believed to be Medusa) are carved over the door opening. 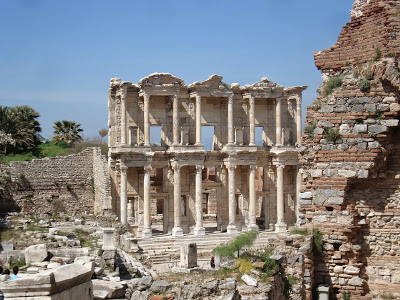 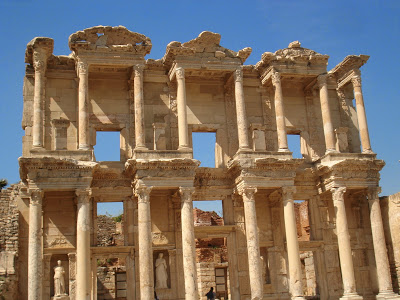 The most awe-inspiring building in the area is the facade of the Celsus Library. It was destroyed by earthquakes, and rebuilt from the rubble in the 1970s. This reconstruction also included rebuilding the statues that sit in the exterior niches, honouring four of the ancient virtues – valour, wisdom, intelligence and knowledge. Originally, the library was built to hold over 12,000 scrolls, which were stored in cupboards in the interior walls. Double-layered walls protected the scrolls from heat and humidity. 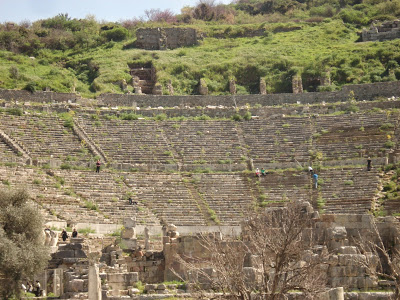 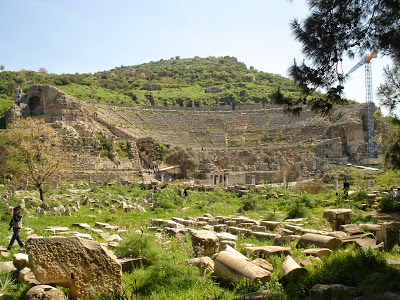 The Great Theatre is enormous by modern standards. It’s hard to believe that it was built in the third century BC, and enlarged by the Romans in the second century to hold 25,000 patrons. One of these patrons might occasionally have been an emperor, as an Emperor’s Box was found in the lower area. 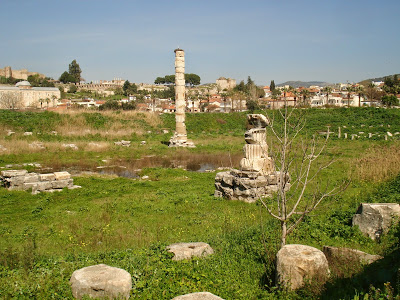 All that remains of the Temple of Artemis are these ruins, but it was once one of the Seven Wonders of the Ancient World. Built completely of marble, it was twice as long and twice as wide as the Parthenon in Athens. The Greek writer and mathematician Philon of Byzantium visited most of the wonders, and wrote, “When I saw the Temple at Ephesus rising to the clouds, all these other wonders were put in the shade.”

–
“Fellow Ephesians, doesn’t all the world know that the city of Ephesus is the guardian of the temple of the great Artemis and of her image, which fell from heaven?”