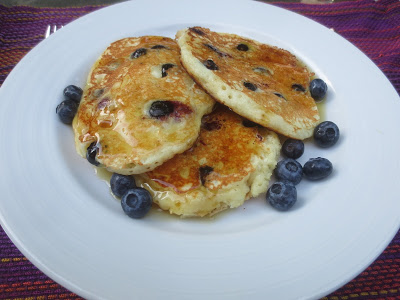 I love brunch. I love going out to a restaurant on a weekend morning, and chatting over an Eggs Benedict or a Huevos Rancheros. I’ve enjoyed some wonderful brunches over the years, from Commander’s Palace in New Orleans to Hell’s Kitchen in Minneapolis, from Beauty and Essex in New York to Toronto’s Farmhouse Tavern.
But as it happens, I get out to brunch far less often than I’d like. On Saturday mornings we’re running errands, and on Sunday mornings we’re in church. Going to brunch isn’t something that often works for us.
Which is why it’s great to find a cookbook that lets me enjoy it in my own house. Mildred Pierce Restaurant (which has since become Mildred’s Temple Restaurant) was named for the Joan Crawford movie Mildred Pierce. The cookbook that it inspired, Out To Brunch, has page after page of great recipes, including a few that are named for characters in the movie. (Remind you of anyone who has a series of recipes inspired by her favourite musicals?)
I couldn’t resist trying one of those recipes, Mrs. Biederhof’s Blueberry Buttermilk Pancakes, so named for the “other woman” in the movie, who might have cooked them to lure Mildred’s husband away. The pancakes were wonderful: tall, fluffy and stuffed with juicy berries, and served with extra berries on the side. I can’t speak for either Mrs. Biederhof or Mr. Pierce, but I was seduced by these delicious pancakes – and so was Mr. Pollock. 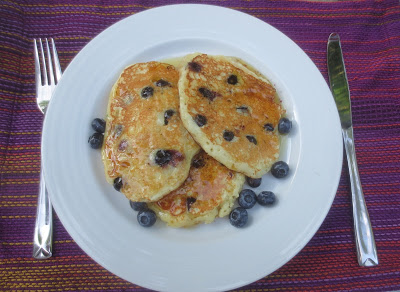 Mrs. Biederhof’s Blueberry Buttermilk Pancakes
(from Out to Brunch at Mildred Pierce Restaurant, by Donna Dooher and Claire Stubbs)
2 cups all-purpose flour
1/4 cup white sugar
1/2 tsp salt
2 1/4 tsp baking powder
1/2 tsp baking soda
2 eggs
2 cups buttermilk
1/4 cup unsalted butter, melted
1 cup fresh blueberries, plus extra for serving
unsalted butter to grease the skillet
maple syrup, for serving
In a large bowl, sift together the flour, sugar, salt, baking powder and baking soda.
In a separate bowl, beat the eggs with the buttermilk and melted butter.
Using a spatula, combine the dry and wet ingredients to make a thick, lumpy batter, taking care not to overmix.
In a nonstick skillet, melt some butter over medium-high heat. Ladle 1/3 cup of batter into the hot skillet and sprinkle with blueberries. Take care not to overcrowd the skillet, since the pancakes will puff up as they cook.
When bubbles appear on the surface of the pancakes and the edges begin to brown, flip the pancakes and cook the other side. It should take about 2 to 3 minutes per side.
Serve with maple syrup and extra blueberries.