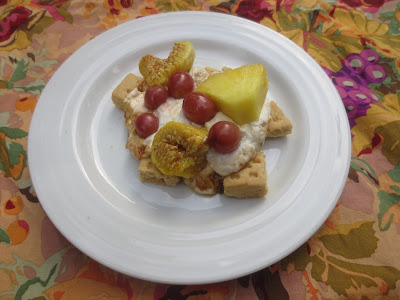 I wanted to try this recipe as soon as I discovered it. Having enjoyed the fabulous Middle Eastern desserts at Toronto’s Byblos restaurant, I couldn’t wait to try something similar in my own kitchen. Everything about the recipe seemed perfect, from the sweetened labneh (a creamy, yogurt-like cheese) to the roasted fruit. And best of all, it didn’t look like a lot of work. A handful of ingredients, and less than half an hour from beginning to end, most of that being time in the oven.

I might never have tried it, though, if it wasn’t for the grappa. I didn’t want to buy a whole bottle for this recipe. But the very next night, I was at a church dinner when one of my friends mentioned that a mutual friend mistook the grappa in her fridge for white wine. (Not a mistake you’d make beyond the first sip.) “We have so much grappa,” she said, “I don’t know what to do with it.”

I offered to take some off her hands. We were both happy. And now it would be a cinch getting the rest of the ingredients! 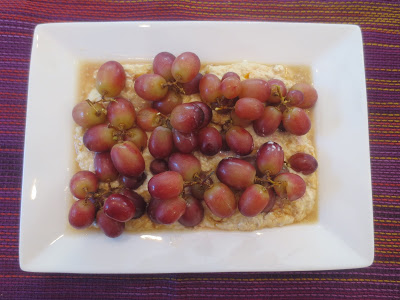 The labneh was the next barrier. I called every grocery store and specialty food store in the area. No one even knew what labneh was, and they certainly didn’t carry it. I found it by accident – at one of the stores I’d called – when I was looking for ricotta cheese for another recipe. (Of course, I was so excited to find the labneh, I forgot the ricotta. But that’s a story for another day.)

I rushed home to make the dessert, only to find someone had eaten all the grapes.

When I came back with a new bunch of grapes, I wasn’t going to leave anything to chance. It may have been the middle of the afternoon, but I was making this dessert before anything else went missing. And I had a near miss, when I reached for the honey and found it suspiciously light. I’d like to thank whoever in my family knew I needed exactly one tablespoon of honey, and left it thoughtfully around the sides of the jar.

After all that prep work, I realized I’d been right: the recipe was indeed both easy to make and wonderfully delicious. The sweet grapes married perfectly with the velvety labneh, and the buttery shortbread was a firm counterpoint to both. I’ve since made it again, and I’ll keep making it. At least until the grappa runs out. 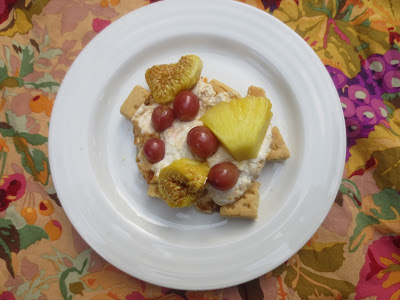 1 Tbsp honey
2 Tbsp grappa
1 pound seedless grapes (the first time I made this, I just used grapes. The second time I included pineapple and fresh figs. They were both fantastic!)

To make the labneh, rub the orange zest into the Demerara sugar. Fold it into the labneh until lightly mixed. (Note: if the labneh isn’t firm, carefully scrape it into a cheesecloth-lined strainer set over a bowl, then cover and refrigerate until it is stable enough to form a peak.) Spread the labneh in ripples on an ovenproof plate. Sprinkle with more Demerara.

To prepare the grapes, thin the honey with the grappa in a large bowl. Snip the grapes into clusters and add to the bowl. (If using other fruit, add it here too.) Turn the fruit in the syrup then transfer to a roasting pan with a shallow rim.

Place both sides side by side in the oven and roast for 12 to 15 minutes. Carefully set the fruit atop the labneh and spoon any collected pan juices over all. Serve with cookies, crushed or whole.