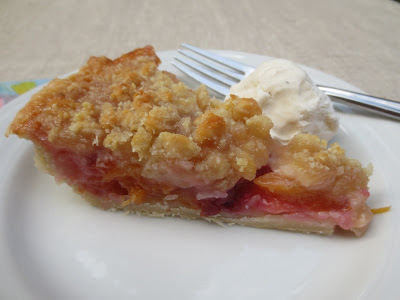 Let’s be honest. You didn’t expect another pie on my blog this week, did you?
After last week’s attempt, which admittedly turned into a delicious tart, you probably thought I was done with pies, at least for a while. But it’s fresh fruit season, and as much as I love working with frozen fruit through the winter, there’s nothing like a pie (crisp/crumble/buckle/anything at all, really) made with fresh fruit that makes my heart sing.
A few of my friends told me after last week’s post that they struggle with some pastry recipes, and excel with others. I know what they mean, yet it’s hard to understand why. A pastry recipe should be a certain combination of flour + fat + liquid, and the result should always be the same, right? Like a math equation that always gives the same answer.
But it doesn’t work that way, and I thought about the one pastry recipe I’ve actually had success with. What if I tried it again, but with a different filling? Specifically, what if I tried it with the plums I’ve been seeing in the farmers’ markets? 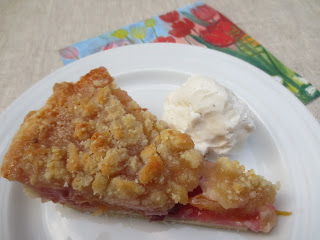 Result: the pastry was a success, and the pie was terrific!
And just like I thought, it all came down to a formula. It’s been a while since I’ve studied math, but if:
R2
Never give up.
(Next week’s post: solving E = mc2, when E is eggplant and mc is manchego cheese. I don’t have a recipe yet, but it sounds delicious.) 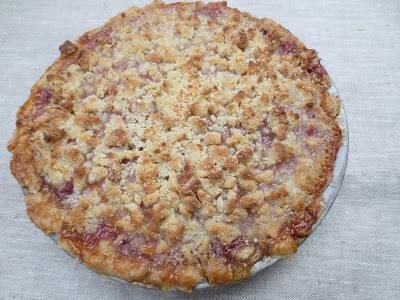 Plum and Marzipan Crumble Pie
(filling adapted from Eats Well With Others, with this pastry recipe)
Note: This pastry recipe yields two crusts, and you only need one for this pie. Roll out the second crust, put it in the freezer and wrap it well. Now you’re all set the next time you want to make a pie!
For the pastry:
2 1/2 cups all-purpose flour
3 Tbsp sugar
1/4 tsp kosher salt
3/4 cup cold unsalted butter, cubed
1/2 cup cold vegetable shortening
9 – 12 Tbsp ice water
For the pie dust:
1 tsp sugar
1 tsp flour
For the filling:
2 pounds plums, pitted and cut into 1/2” thick slices
3/4 cups sugar (first amount)
1/2 cup sugar (second amount)
6 Tbsp cornstarch
1 egg, beaten
1 tsp sugar (third amount)
For the marzipan crumble:
10 ounces almond paste
1/3 cup almond flour
2 Tbsp cold unsalted butter, diced
2 Tbsp sugar
To make the pastry:
Combine 2 1/2 cups flour, 3 Tbsp sugar, and kosher salt in a large bowl. Cut in butter and shortening until they are the size of peanuts. Stir in ice water 3 Tbsp at a time (dough shouldn’t be sticky). Cover dough with plastic wrap and chill 30 minutes before using.
On lightly floured surface, roll half the dough into a 12” circle about 1/8” thick. Transfer to a 9” plate. (Since this recipe yields two crusts, do the same with the second half of the dough. You can put it in the freezer, well-wrapped, until the next time you make a single-crust pie.)
To make the pie:
Combine 1 tsp sugar and 1 tsp flour in a small bowl for the pie dust. Set aside.
Put half the plums and 3/4 cup sugar into a medium saucepan. Cook over medium heat, stirring frequently, until the fruit is bubbly and has released much of its juices, about 10 minutes.
Stir the raw plum slices into the cooked plums. Stir in another 1/2 cup sugar. Stir in the cornstarch and let cool to room temperature.
Heat oven to 350 degrees.
Sprinkle the bottom of the crust with the pie dust. You probably won’t need all of it – you just want enough to barely coat the bottom, to keep the crust from getting soggy from the fruit.
Place the plums in a colander over a medium bowl. Place the drained plums into the crust, and pour the liquid filling over top. Brush the edges of the dough with the beaten egg and sprinkle 1 tsp sugar over the whole pie.
Place the pie on a baking sheet and bake for 30 minutes, or until the edges start to brown.
In the meantime, make the marzipan crumble. Combine the almond paste and almond flour in a bowl and cut together until marzipan is in small pieces. Add the butter and sugar, and continue cutting together until almond paste and butter are in pea-sized pieces.
After 30 minutes, remove the pie from the oven and sprinkle the marzipan crumble over the top. Bake for an additional 35 – 45 minutes, or until the topping is golden and crunchy and the filling is bubbling. (I covered my pie with foil, and removed it 10 minutes before it was done baking.
Let the pie cool completely before serving.