“I can’t remember all the times I tried to tell myself
To hold on to these moments as they pass.
And it’s one more day up in the canyon
And it’s one more night in Hollywood
It’s been so long since I’ve seen the ocean .. I guess I should.”

– from “A Long December” by the Counting Crows

I love this song by the Counting Crows, but this December doesn’t seem particularly long – like most Decembers, it will likely pass in a heartbeat. I’d love to know how I can slow the passage of the next few weeks so I have time to enjoy everything I love about the month.

I haven’t figured out how to slow time down, but it felt like I did when I prepared these slow-cooker baked apples. They’re the best baked apples I’ve ever eaten. I think it was the low heat and the long baking time that cooked them to a tender perfection – and lent my kitchen a wonderful spicy aroma in the process. The first time I made them, I skipped the step about peeling the skin off the top of the apple (which I later realized was intended to keep them from bursting). That first batch was delicious but unphotographable, and I knew I’d have to make them again to post them on the blog. I’ve never been so happy to have a recipe fail! 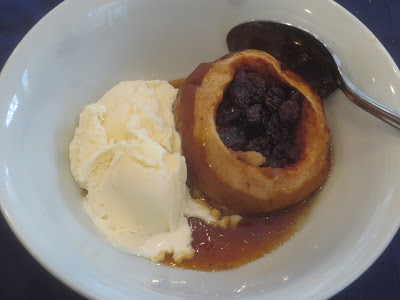 Core each apple almost to bottom, leaving base intact. Slice off 3/4 inch wide strip of peel around hole at top, and score through the skin halfway down, all the way around the apple. (These prevent the apple from bursting.)

Cover and cook on low, basting several times, until tender, about 3 to 4 hours. Transfer apples to shallow serving dish and keep warm.

Whisk cornstarch with 1 Tbsp cold water; whisk into liquid in slow cooker. Cover and cook on high until sauce is thickened, about 15 minutes.