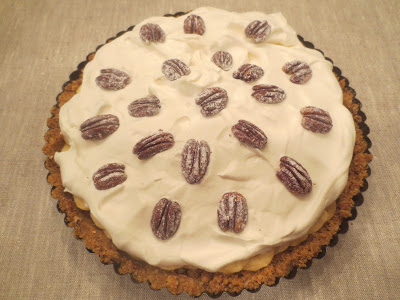 I’ve always told my family that the best Christmas gifts are experiences. Some of my most treasured gifts have been stories, poetry, a handmade recipe book, and lyrics and music for a song. You just can’t buy that kind of gift in a store.

In that vein, I was thrilled to receive a Christmas gift from my youngest daughter promising a Love Actually party. We’d watch the movie together, and she’d serve a meal complete with food mentioned in the script. Could anything be more fun than that?

There aren’t a lot of food references in the movie – just two (unless you count the lobsters in the Christmas play). First are the chicken kebobs that Liam Neeson’s character offered his stepson, when he was too busy practising the drums to eat. My daughter’s kebobs were terrific, and hopefully I’ll blog about them sometime soon.

The second was the banoffee pie that Keira Knightley offers her husband’s best friend in exchange for the wedding video. After he turned it down, she said, “You would’ve broken my heart if you’d said yes.” No spoilers here on whose heart is broken in the movie, but I can tell you my heart would have broken if I’d never tried this spectacular dessert.

For those of you who aren’t familiar with banoffee pies (a group which would have included me, before Christmas), they’re made of a graham wafer/cookie base, covered with layers of dulce de leche, sliced bananas, and whipped cream. I wondered if it might be overly rich. But my daughter and I found this recipe and collaborated on this wonderful pie, whose richness was cut a little by the squeeze of lemon on the bananas.

Oh, and the party? It was amazing! All four of us enjoyed the meal, but Andrew declined the movie with (not so many) regrets. However, as the evening wore on, he joined in, and even admitted by the end that it was “sweet.” Just like this delightful banoffee pie. 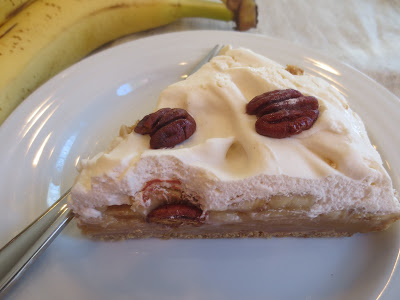 Banoffee Pie
(inspired by this recipe in the Guardian)

For the base
1 1/2 cups graham cracker crumbs
1/2 cup pecans
1/2 cup unsalted butter, melted
For the filling
7 Tbsp unsalted butter
7 Tbsp brown sugar
14 ounces dulce de leche (homemade or store bought)
½ tsp salt
For the topping
About 20 pecan halves
1 tsp icing sugar
4 ripe bananas
Squeeze of lemon juice
1 cup whipping cream
2 tsp Kahlua
Lightly butter a 9” tart pan with a removable bottom.
Combine the graham cracker crumbs and the melted butter. Chop the pecans coarsely, either with a knife or in a food processor, and add them to the graham cracker mixture. Press the mixture into the tart pan to line the base and sides. Chill.
Melt the butter and sugar over medium heat, stirring to dissolve the sugar. Add the dulce de leche and the salt and bring to a boil, stirring constantly until smooth. Pour over the pie crust and chill for an hour or more.
To prepare the pecans, preheat the oven to 350 F. Line a baking sheet with parchment paper. Put pecans in a bowl and sprinkle with the icing sugar, then spread on the baking sheet. Bake for 10 – 12 minutes, shaking occasionally. Let them cool before using them. (The pie can be made up to this point up to 48 hours in advance.)
Thinly slice the bananas and toss with the lemon juice. Arrange on top of the cooled caramel in overlapping circles.
Whip the cream into soft peaks, and stir in the Kahlua. Spread on top of the bananas. Arrange the candied pecans on top and serve.
(Note: If you wanted the dessert a little sweeter, you could add a touch of sugar to the whipping cream.)
*

This has nothing to do with banoffee pies, but I couldn’t let a Love Actually post go by without one more quote:

Jamie: (in English) It’s my favourite time of day, driving you.
Aurelia: (in Portuguese) It’s the saddest part of my day, leaving you.